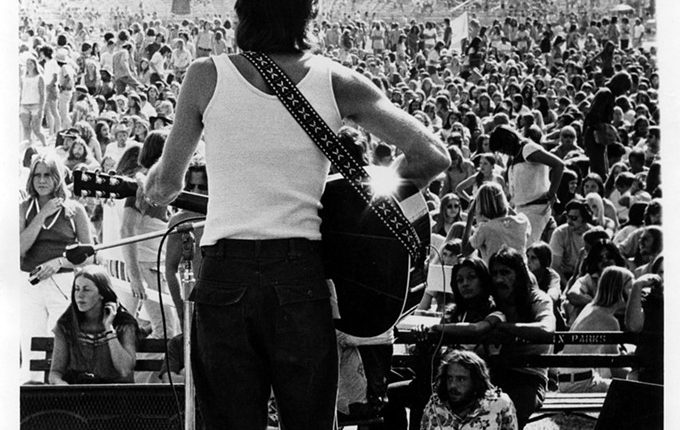 Cowboy Punk: “The Whole Enchilada” Traces the Story of Tucson Rock From the ’70s Through the ’90s” | Music Feature

Bob Meighan, whose music is featured on “The Whole Enchilada” supporting the band Little Feat at the Phoenix Giants Stadium in 1973.

As it turns out, the story of Tucson rock is filled with so many twists and characters that it couldn’t possibly be summed up in one record — or even three, for that matter.
“The Whole Enchilada: The History of Desert Rock” is a multimedia project that follows Tucson’s music landscape from 1978 to 1994, featuring the music and stories from those who lived it. “The Whole Enchilada” is a 3-LP compilation, accompanied by a book as well as a documentary. The whole project will be released with live music, screenings and more at Hotel Congress on Saturday, April 16.

The compilation traces the emergence of Tucson’s desert rock scene: that warm, energetic, sometimes humorous borderlands concoction that sprouted when punk rock crashed into the existing cowboy music of Arizona. But every song on the compilation is not strictly that desert rock mixture. Across the three records, you can hear the scene form, from acoustic country music in the beginning to more post-punk sounds in the ’80s to indie rock in the ’90s. But it all sounds unquestionably Tucsonan.

“It wasn’t originally going to be a 3-LP album, but as we got into it, I realized there were so many good bands here,” said producer Rich Hopkins. “And I couldn’t even include all the bands I wanted to. I had to leave some people off, but what could I do? And the book is for if you’re going to be listening to all these bands, you better know who they are and what they went through, because Tucson has such a neat history.”

Hopkins has played guitar in multiple Tucson bands, including The Sidewinders (later the Sand Rubies) and Rich Hopkins & the Luminarios. He has been involved in multiple compilations of Tucson music in the past, but never one on this scale. He says he’s had the idea for years, and the pandemic spurred him into action.

“We weren’t playing and everything was up in the air, and it seemed like a good time to do something a little different. Especially because some of the people were getting older,” Hopkins said. “It just seemed like the right time.”

The compilation features the likes of Howe Gelb, The Sidewinders, Chuck Wagon and the Wheels, River Roses, The Pedestrians, Dusty Chaps and many more. While much of the music sounds like the Sonoran Desert, it also depicts the area, from lyrics about the desert’s beauty and specific Tucson locations, to a cocaine bust in Hermosillo.

The songs range from reflective solo performances of just a guitar and voice, to extended noisy jams one might hear spilling out of a dive bar somewhere off Broadway. Hopkins says the years of the album, ’78 through ’94, begin with the time he became interested in live music in Tucson, and end “because we had to wrap it up at some point.” It’s a love letter to the many sides of Tucson music, but perhaps more specifically, it’s a celebration of an era of desert punks that has never been fully captured. The compilation was released by Hopkins’ San Jacinto Records.

Many of the musicians on the compilation are also featured on the adjoining documentary, which will be screening throughout the release show. Directed by Maggie Rawling Smith, “The Whole Enchilada” documentary interviews Tucson musicians about the formation and trajectory of the desert rock sound.

“We wanted to shine a light on bands that had never made it out of the Tucson scene, but were still groundbreaking in desert rock, which had gone on to influence a lot of other people,” Smith said. “A lot of this music had never been heard outside of this region.”

According to Smith, much of the history of the scene is not well archived on the internet. This made the documentary, records and book all the more critical, especially as some of the key figures passed away while the project was being compiled, such as musicians Ned Sutton and Jo Tamez, who co-owned the Record Room on Fourth Avenue.

“It was really important to do at this time, because there were a number of the old guard who were getting sick or on their last leg, so they could see one more resurgence of the music. And with that I realized we should get archival footage of all these people,” Smith said. “I tried to do the old guard first, to get a feeling of what the scene was like before the punks came. And then how they viewed the scene 10 years before and 10 years after… Fortunately, there were people with really good historical heads on their shoulders.”

The documentary, filmed throughout the pandemic, features individual interviews as well as scenes where former bandmates interact. Musicians like Billy Sedlmayr, Dave Slutes and Suzie Evans describe the music of the era, but also the locations in Tucson that helped birth it. As Gelb describes in the documentary, downtown Tucson was basically a ghost town in those days, which turned out to be a benefit for some of the musicians.

“It certainly gave people an opportunity,” Hopkins said. “The punk rock scene had a chance to flourish because they could play at these down-and-out places and create their own scene. There were opportunities for bands to play, because it was kind of dead downtown.”

As part of gathering reminiscences for the documentary, Smith also reached out to the “Remembering Tucson” Facebook group. She said there was an outpouring of support in the form of photos and stories of Tucson in the ’70s and ’80s.

“Everybody I interviewed had something extremely endearing about them. Whether they went all around the world with their music, or never left. There’s something magical about this period of time and scene that absolutely changed every person involved. It was so powerful and moving,” Smith said. “There was also a sense of gratitude about archiving it and taking it seriously. As a filmmaker, you don’t often have the kind of instant gratification where even before people saw it, they were glad you were interviewing them.”

When “The Whole Enchilada” documentary screened at the Tucson Film & Music Festival, Smith says some of the attendees hadn’t seen each other in 30 years or more.

“There were tears,” Smith said. “It was a really rewarding project to be a part of.”

“The Whole Enchilada” book works as a kind of extended liner notes for the records. There are full essays and photos dedicated to every band whose music is featured. Often times, the essays will be in the musicians’ own words, recollecting the music biz, the desert cadre, stifling garage shows, and plenty of unchanged street names. The book was edited by Tucson Weekly columnist Brian Smith.

The 70-page paperback book opens with lyrics from Tucson rock band Fish Karma’s 1992 song “Sunnyslope,” which works as a kind of humorous summation for the entire scene: “My generation came of age in the ’70s, but that did not preclude us from aping the youth culture of the ’60s, devoid of any understanding or context.”

At the end of memories and images of the scene, the book fittingly includes an in memoriam page of musical vanguards. A few of them passed back in the ’80s and ’90s, but most were in the last 10 years, including multiple in 2021. This just shows that for capturing the story and the essence of Tucson rock, it may have been now or never .

“Every town has its own flavor, and this is Tucson’s,” Hopkins said. “People went out there with a guitar and made some noise in the desert.”