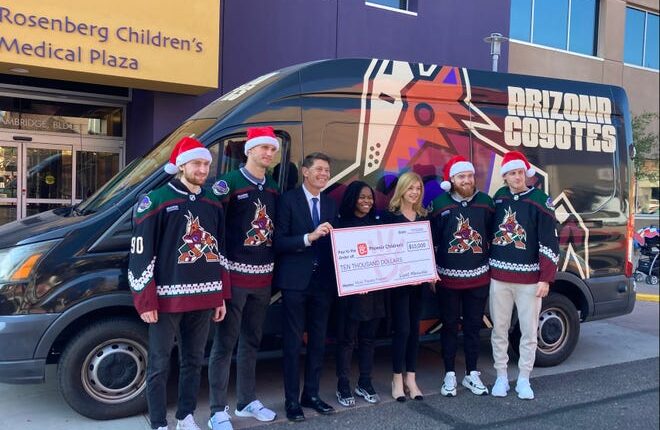 The Coyotes haven’t been in Arizona much this season, but the team will have quality time at home for the holidays.

With the team playing eight games at Mullett Arena in December, twice as many as the previous month, the Coyotes had time to make an impact on the community, conducting their annual toy drive for Phoenix Children’s.

“I find it as a joy, just seeing the kids be so happy to see us,” Coyote’s defenseman Juuso Valimaki said. “I think that’s a feeling you don’t get anywhere else. All this stuff is way bigger than sports or who we are. Here at the hospital, seeing the kids smile and being the reason for it, I think that’s awesome.”

Valimaki, along with teammates Nick Bjugstad, Matias Maccelli, Liam O’Brien, and JJ Moser visited Phoenix Children’s to talk with the patients and drop off toy donated by fans and team staff.

The hospital’s annual toy drive converts a conference room into a winter wonderland called Toyland, where family members can shop through aisles of toys and personal hygiene products for patients. Along with a truckload of donated items, the Coyotes presented backpacks with team souvenirs.

“During this time of the year, any family member or parent who has to spend time in the hospital in the holidays, it’s extremely difficult,” said Alexis Meruelo, chair of the Coyotes Foundation Board of Directors. “To be able to bring a little bit of that cheer and have the players interact with patients, it means the world.”

Throughout the visit, the players were assigned to a robot that would enter into patients’ rooms and would spend several minutes talking about topics from pregame snacks to fart jokes. O’Brien was even serenaded by fart noises from one patient for the majority of his visit.

But all the smiles and laughs from the time spent with the children reminds the players of the community’s importance to them.

“Being able to give back with our platforms, it goes a long way. We know that, so we try to do that as much as we can,” O’Brien said.

The visit also included a $10,000 donation for the music therapy program from the Coyotes Foundation as presented by Meruelo. The program is one of the several arts-based therapies offered to children at the hospital.

“It’s still growing and every little bit counts. They do go room-to-room, but they don’t have a robust program yet,” Meruelo said.

On top of donating toys, the Coyotes scheduled a telethon on Bally Sports to support the Phoenix Children’s Hope Fund during Friday’s game against the New York Islanders. Last year, the Coyotes raised $100,000.

“The players and the energy that the team brings, these guys are heroes on the ice and they’re heroes when they turn up and take time out of their day to spend time with kids,” Tim Harrison, Phoenix Children’s vice president of corporate partnerships and special events, said. “That’s a gift that’s just priceless. Most of us don’t get to meet our heroes often. We really value these partnerships and experiences.”