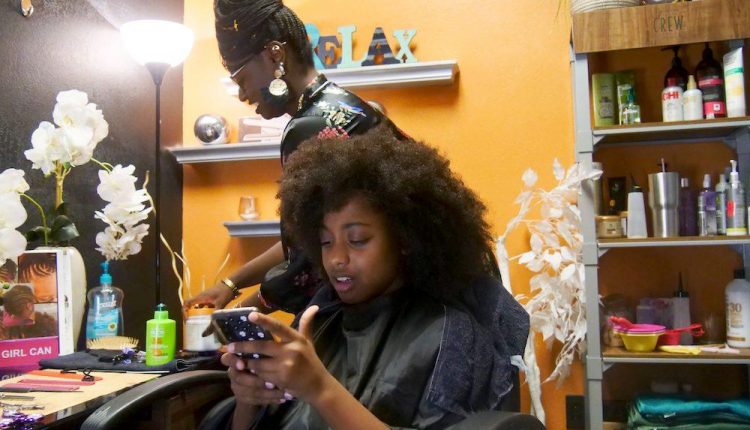 LeKyndra Ouedrago started her hair-care journey as a little girl sitting on her back porch, braiding, twisting and styling the hair of family, friends and neighbors just for the fun of it.

Years later, another little girl sits before her. Ouedrago, now a stylist in a Tempe hair salon and owner of a natural hair care brand, specializes in creating natural styles for clients of all ages.

Ouedrago has always loved natural hair, and she makes an effort to take others along on her journey, sharing all she has learned. Although ignorant or uneducated people might discriminate, Ouedrago celebrates hair as part of what makes Black people so beautiful.

“As an African American person, we were born this way,” she said. “It is a birthright to be able to wear my natural hair in any facet, in any manner, just like any other race.”

Too often in the US, the locs, Afros, Senegelese twists, braids, fades and cornrows that arise from naturally textured hair have been used against Black people in the workplace and elsewhere. A 2019 study by the personal care company Dove found that Black women are 1.5 times more likely non-Black people to be sent home because of their hair, and that nearly 50% of Black girls experience hair discrimination in school.

In one notorious case in 2019, Andrew Johnson, a young Black wrestler in New Jersey, was told by a white referee to cut the locs he had been wearing since he was a child or forfeit the match. Johnson complied; the image of his shorn hair falling to the floor captured national attention and condemnation.

The CROWN Act, which bans discrimination against natural hair textures and styles, was first introduced and passed in California in 2019. The act was created by the personal-care company Dove and the Crown Coalition, a national alliance founded by Dove, the National Urban League, Color of Change and the Western Center on Law and Poverty, in partnership with California legislators. CROWN stands for Creating an Open and Respectful World for Natural Hair.

Since then, versions of the CROWN Act have been adopted in more than 14 states and over 10 cities, including Tucson and Tempe last year. And in March of this year, the US House passed the CROWN Act and sent it to the Senate, where its fate isn’t clear.

Community members and local organizations – including the Black Women’s Task Force of Tucson and Tempe residents Janet Hamlin and Candyce Lindsay – spoke up and worked with municipal officials to make the CROWN Act law in Tucson and Tempe.

Annie Sykes, president of the Tucson task force, said the move was a preventative measure. The Tucson City Council passed the CROWN Act unanimously in February 2021.

“We had never thought about just taking it to our own, the city of Tucson,” Sykes said. “If something does happen, we at least have something on the books to come at it with.”

In November 2021, the Tempe City Council also unanimously enacted the legislation, thanks to the efforts of Lindsay and Hamlin.

“Being a Black woman who transitioned from keeping my hair straight so that I could fit the mold,” Lindsay said. “I felt like my voice was heard and I can actually speak about it. I’m telling everybody I know in every other city … reach out to your local folks and find out what you can do. And I am hopeful that Tempe and Tucson is just the beginning for Arizona.”

To Ouedrago, the CROWN Act is an affirmation of something she already knew – that natural hair is stunning and expressive.

“All people are beautiful,” she said. “And I believe that on every crown, on every set of hair is an expression. It’s an expression of you emphasizing a part of your beauty.”