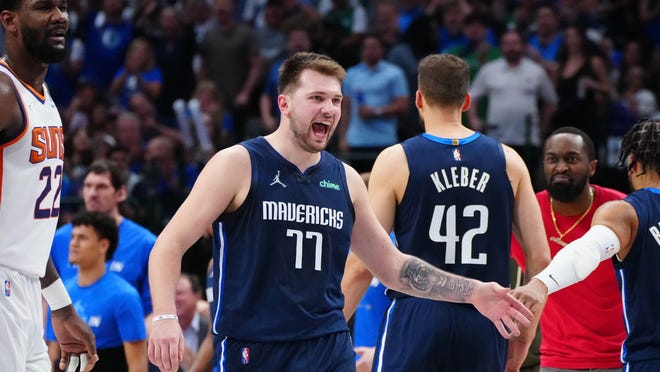 They’re the No. 1 overall seed in the postseason.

They were coming off a 30-point home win heading into Thursday’s Game 6 and looking to close out fourth-seeded Dallas and advance to the Western Conference finals.

The Mavericks had other ideas.

“I didn’t think we understood the desperation they were going to play with,” Suns coach Monty Williams said. “You couple that with the turnovers that we had tonight, it’s a recipe for what we just got.”

Game 7 is set for Sunday in Phoenix.

The Suns are facing elimination for the first time in this postseason in which they’re favored to return to the NBA Finals and win it all this time.

“I think we worked all season to have homecourt advantage and get the last game at our house,” Suns All-Star Devin Booker said. “It’s exciting. It’s Game 7. I’ve never been in a Game 7. It’s going to be fun.”

Game 7 will begin at 5 pm Arizona time if Milwaukee and Boston have a Game 7.

If the defending NBA champion Bucks beat the Celtics in Friday’s Game 6 in Milwaukee to advance to the Eastern Conference finals, the Suns and Mavs will start their Game 7 at 12:30 pm Arizona time.

“It’s win or go home,” Suns All-Star Chris Paul said. “I feel like we worked as hard as we did all season to get homecourt. Just ’cause you have homecourt doesn’t guarantee you’re going to win the game, but we’d rather play at home than play here.”

The Mavericks bounced back from getting destroyed in Tuesday’s Game 5 in Phoenix to blitz the Suns 48 hours later.

“Everybody’s got to be locked in,” Ayton said. “It’s got to be a together thing where everybody is on the same page and it wasn’t like that tonight. There were a lot of mistakes. Felt like a regular season game with the amount of mistakes we had today. The turnovers. Terrible . Unacceptable. It was that type of game where it’s just unacceptable. Those dudes wanted it more.”

Luka Doncic scored a game-high 33 points for Dallas, which made 16-of-39 shots from 3 and scored 29 points off 22 Phoenix turnovers.

“Again, in a desperate situation, they came right out the gate with force and grit and sped us up,” Williams said. “We were about as unorganized on offense tonight as we’ve ever been and that was one of the reasons why we threw it around the gym tonight. We just did not have the focus and determination that it takes to win a game like this on the road, but we will have it the next time we step on the floor.”

The Suns find themselves needing a Game 7 to win the series thanks in large part to turnovers. Booker and Paul combined for 13 turnovers as the Mavericks had 17 steals.

“Turnovers are like interceptions,” Paul said. “When we turn the ball over, they’re getting transition 3s.”

“Just being a little careless,” Booker said. “Got to clean it up.”

In turn, Dallas only committing seven that led to just six points for the Suns.

This is after coughing it up 18 times in Game 5 with Phoenix scoring 24 points off them.

“Turnovers was something that we talked about,” Mavs coach Jason Kidd said. “We kept those down. We made open shots. Everybody was involved. The ball was touching the paint.”

The Mavericks got a huge call overturned when Mavs coach Jason Kidd challenged a foul on Doncic guarding Booker on the drive.

Had the call stood, that would’ve been Doncic’s fifth foul with 10:02 left in the game.

Kidd would’ve likely taken him out of the game.

Doncic instead stayed in the game with four fouls with Dallas up, 96-76.

Phoenix has eight turnovers that led to 12 Dallas points while Mavericks only had two that two Phoenix points in the first half.

This is after Dallas had 12 that led to 18 Phoenix points in the third quarter of Game 5.