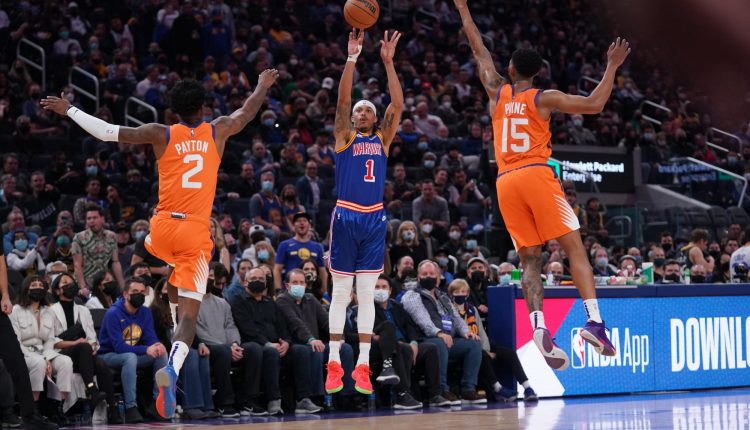 Shooting-guard Damion Lee is one of the new additions to the Phoenix Suns this offseason, signing a one-year, $2.1 million deal with the franchise early in free agency.

Lee’s story is an interesting one and garners the question – what makes him an NBA player? How, after going undrafted in 2016, has the 29-year-old forged out a successful NBA career that reached the heights of a championship just months ago?

Having often fought the tag of being Stephen Curry’s brother-in-law, Damion Lee now sets about his own path at the Phoenix Suns.

Lee owns a mark that many undrafted players have – one of an unfiltered desire to work and compete hard, making the most of every opportunity. However, to survive in the NBA, you have to have an identifiable skill that makes you a valued commodity.

For Lee, that’s hard to gauge if you just look at the raw numbers from last season. But in a league that prioritizes catch-and-shoot threats who can take advantage of collapsing defenses, Lee’s three-point shooting is what ultimately keeps him in the NBA.

No, we’re not talking a high-volume sniper like a Landry Shamet who, coincidentally, will be fighting Lee for minutes this season. Rather a good three-point shooter who’s solid all-around game can prove him a better option than others who have major negatives.

After the beginning of the last season as a crucial member of the Golden State Warriors rotation, Lee found himself in and out of Steve Kerr’s lineups. That inconsistency bred from his inconsistent jumpshot, an aspect that began to waver significantly for the first time in his career.

He shot 39.7% on 3.4 attempts per game across the 2020-21 season – an excellent mark for any rotational bench piece. This fell to 33.7% last season though, including 32.9% on catch-and-shoot attempts. For a player who’s pull up attempts will be limited to the odd one or two in garbage time, that’s a really poor percentage.

If he repeats the dose next season, he won’t be valuable enough in other areas to warrant consistent minutes. His remaining facets require involvement in a positive team construct rather than individual brilliance.

Lee can put the ball on the floor but won’t be driving to the rim with any real force. He has a mid-range and floater game but isn’t wholly efficient – ​​he shot a deplorable 27.1% from the mid-range last season, as well as 39.1% from the paint (not including the restricted area).

He’s a willing ball mover in a team offense but won’t be throwing out flashy dimes. He’s a good off-ball cutter but won’t necessarily be exploding into punctuating finishes. At 6’5″ he’s a capable and committed team defender but not a primary option you’d be utilizing to lockdown an opposition scorer.

Again, he’s a solid player whose value is determined by the three-point percentage. If he returns to near 40%, then he can be a quality 15-20 minute option even come playoff time. The question is how can the Suns get him to mark that?

Like most role players, Lee’s output will be predicated on what his more talented teammates provide. He should get some open opportunities through the surgical nature of Chris Paul and Devin Booker, then it’s up to him as a player whose value embodies the notion of a ‘make-or-miss’ league.