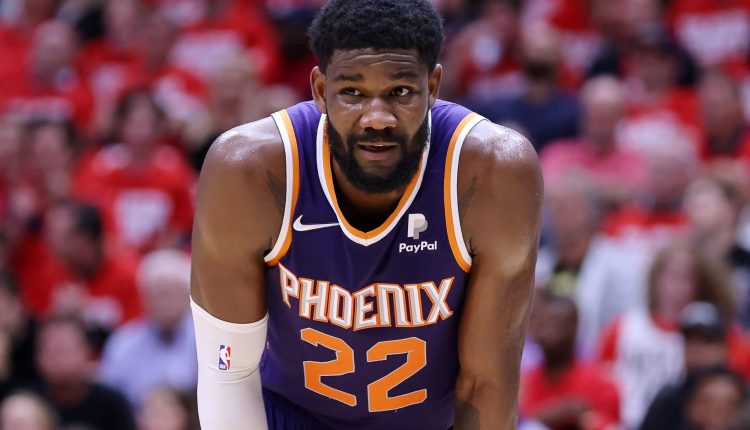 Deandre Ayton could unlock Phoenix Suns, according to Zach Lowe

We’ve delved heavily into Phoenix Suns big man Deandre Ayton this offseason, analyzing the improvements he can make in the wake of signing a four-year, $133 million contract to remain with the franchise.

Ayton is a key piece to the Suns future puzzle, particularly if the front office remain with the same core throughout this championship window, however long that may be.

According to ESPN’s Zach Lowe, Deandre Ayton is key to unlocking the Phoenix Suns should they refrain from making a major roster upgrade.

Lowe was joined by Sports Illustrated’s Chris Herring on his podcast earlier in the week, with the pair going in depth on the Suns situation at present. The overriding question was if the Suns have enough internal improvement to remain contenders, or if they simply must source a roster upgrade via trade.

When dissecting various improvement areas, Lowe identified the return of Dario Saric, and the growth in ball-handling and shot creation from Mikal Bridges and Cameron Johnson. However, he landed on Ayton as the primary key to the Suns’ internal growth.

“Ayton as the player he dreams himself to be. Ayton as a guy who can shoot jump shots, face up, work the post, shoot threes, facilitates the offense. I think that has the best chance of being the answer…I like that Ayton thinks he can do more…Of all the potential answers, that’s the one that looms to me as the one that can unlock their team a little bit.”

While there’s reason for optimism that Phoenix can improve self-sufficiently due to their relative youth outside Chris Paul, both Lowe and Herring agreed that the answers lie in acquiring a difference-making player at some point in the short-to-medium term.

Lowe believes that will ultimately happen, suggesting they’ll add a top 6-7 player on their roster prior to next year’s trade deadline. If that doesn’t eventuate, then Ayton faces even greater responsibility and could well decide the franchise’s final destination in 2022-23.