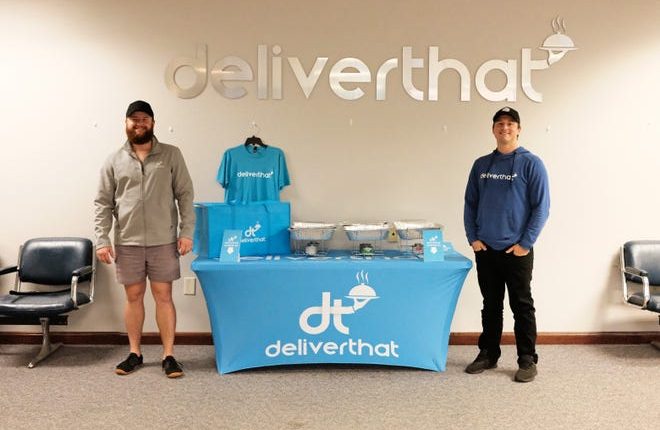 JACKSON TWP. – Founded in 2016, DeliverThat continues to grow and expand into new territories.

Drivers working for DeliverThat bring food to a location and set up a buffet style to allow quick serving. In many cases, the clients are offices providing food for meetings, but some are for larger events such as wedding receptions.

IBISWorld, a research company, estimated catering is a $10.6 billion industry in the US

I caught up with DeliverThat’s Marketing and Content Coordinator Ben Alkire to learn more about the company, which is now operating in all 50 states.

I see you’re a catering delivery service. Can you tell me how that works?

DeliverThat is a last-mile catering delivery service. We are contracted with companies such as ezCater, Qdoba, Old Carolina and many other nationally recognized brands. These partners utilize the services of DeliverThat to outsource their catering delivery. DeliverThat has prided itself on being a brand “by drivers, for drivers,” expanding influence across the gig economy and 1099 contracted work.

Why did you choose to do catering delivery instead of just regular food delivery?

Initially, the business began on the campus of Ohio University as OU Delivery. The service, ahead of its time, mimicked what would become Uber Eats and DoorDash in future years.

Upon graduation, the expansion of OU Delivery to other campuses across Ohio became Campus Delivery. After partnering with universities such as Kent State, Miami of Ohio and others, it became apparent that the business could not continue as it had initially been designed.

While attempting to sell the on-demand delivery service to a local Ruby Tuesday in Jackson Township, a manager at the time mentioned he needed help with catering delivery and not on-demand delivery. The two founders, Aaron and John, took the delivery, received a $30 gratuity from the customer, and immediately realized where they needed to pivot the business.

What has changed for DeliverThat in the past two years?

The past two years have been a lesson in adaptation for DeliverThat and all businesses. In the early years, to onboard new drivers, there were “Lead Drivers” in each market, who would meet prospective contractors to teach them the process during a ride-a-long.

Due to the pandemic, the onboarding process has now moved entirely virtual and online. The demand for food delivery has seen a massive overhaul in demand since the pandemic. While off-premises were typically viewed as a specialty or luxury item, it became a complete necessity for restaurant brands to stay afloat. Delivery volume since 2019 has increased by 210%, while the driver fleet of DeliverThat has also increased by almost 110%.

Restaurant Reviews:Fizzle Fries a must at Fizzlestix in Perry Twp.

Restaurant Review:Lots of options to be healthy at BAM! Healthy Cuisine in North Canton

You are now in all 50 states. Can you tell me more about how this came about? Are you only in big cities in each state?

Coverage in late 2019 included about 28 states and 39 major metros. DeliverThat now boasts coverage in all 50 states, over 200 major metros and 7,000 ZIP codes as of late October. The expansion has continued as demand for food delivery increases.

Initially, DeliverThat was in major metros like Boston, Miami and Chicago. We have since begun to expand into what you would consider smaller markets as well, which include Fort Wayne, Indiana; Flagstaff, Arizona; and Norwalk, Connecticut.

Are there plans to keep expanding? If so, what does that look like?

DeliverThat continues to expand to where we are needed and requested. There are no plans to slow down. It is mostly dependent on new partnerships, expanding accounts and driver demand.

By the end of 2022, DeliverThat will have 40 full-time employees. We’re looking for the best and brightest to join our team. We take pride in our people and are always looking to add to the DeliverThat family.