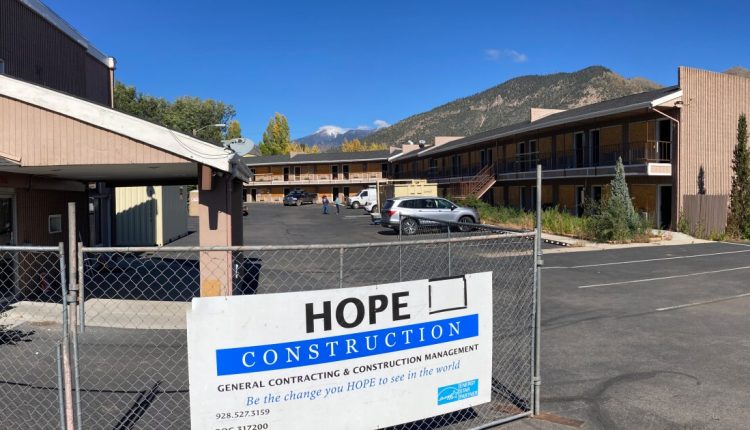 Finding affordable housing has long been an issue in the City of Flagstaff and the problem is getting worse. The city has an ambitious ten-year plan with a goal of reducing the affordable housing need by half. KNAU’s Sakya Calsoyas reports.

It’s a chilly morning at a downtown coffee shop, where the City of Flagstaff is hosting an open house to discuss the housing crisis. Donny Dove is one of the residents who’s come to listen. “We’re 33-year residents of Flagstaff. And we’d like to see the towns that can grow in a way that is good for the community. And what we’ve been seeing, we don’t like,” Dove says.

Donny and his wife Caroline founded and co-own Canyon REO a river equipment outfitting company. They’re worried about their employees being able to find a place to live. “When you drive up to their house and they’ve got seven cars in the driveway, that’s not a party that they’re living there. You know, that’s ridiculous,” he says. “We absolutely need more affordable housing. But as my husband says, because of some of the things we’ve seen happening we just wanted to learn a lot more about the process and what the city is trying to accomplish,” Caroline Dove says.

The City of Flagstaff is ranked fourth in the nation for a shortage in affordable housing, according to the National Low Income Housing Coalition. Tad Moore, the President of the Northern Arizona Association of Realtors, says it’s an attractive place to live. “So, Flagstaff had all the buttons. It was the Four Seasons, it was the mountains, it was the rural climate, but also being within 2 hours of a major metro, if you need like specialized health care, we were kind of that perfect storm,” Moore says.

The market is squeezed by a growing city population as well as houses locked up by second homes, short-term rentals, and investment companies that price out the local residents. Moore claims another factor is that Flagstaff is landlocked. “It’s like 2 million acres of Coconino National Forest that surround us,” he says.

In the last decade, the median home price for Flagstaff more than doubled while the rent went up 66 percent according to Housing and Urban Development Statistics, meanwhile the average income for workers only rose by 37 percent. “And they’re the ones that get left behind because they just can’t afford to be here. They can’t get another job. They’re already working two or three jobs just to make rents, just to try to get a foot in the door,” Moore says.

The city declared a housing emergency in 2020, and put together a 10-year plan to ease the shortage. Adriana Fisher is the city’s housing programs manager. “Our goal is to impact 6000 low to moderate income Flagstaff residents through unit creation or subsidy,” says Fisher.

65 percent of Flagstaff is in low to moderate income households. “So our goal is to make homeownership accessible because that is long term, how you build equity,” Fisher explains.

The City has multiple subsidy programs meant to boost homeownership in the long run. These programs sometimes work in partnership with Housing Solutions of Northern Arizona. Devonna McLaughlin is the CEO. “Some generators, some hammering, we’ve got the workers on site kind of working away,” says McLaughlin. She’s walking through an old hotel being renovated into living quarters. This will be transitional housing for people who are experiencing homelessness. “But, I would say over the last five years or so, the need for affordable housing has expanded up the income levels,” says McLaughlin. She also says the city’s ten year plan will help move the needle but not solve the problem entirely.

“But it’s such a big issue for so many households. I don’t think tomorrow we snap our fingers and we’ve solved affordable housing, unfortunately,” McLaughlin says. She also says that one strategy to come from the city’s plan is Proposition 442, a ballot measure that would dedicate 20 million dollars to create rental and homeownership opportunities in Flagstaff. Voters will decide on that next week.