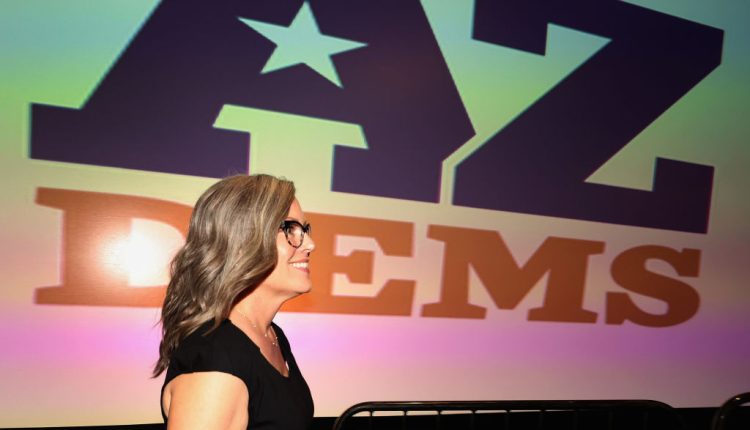 After tens of thousands more votes were added to the tally Thursday in Arizona’s midterm election, Democratic candidates for statewide office increased their leads over their Republican opponents.

But results were far from final with more than 570,000 ballots in Arizona left to be counted, including some 330,000 uncounted ballots in Maricopa County. Republicans are betting big on those ballots, predicting that they will more closely resemble in-person Election Day results — which they dominated nearly two-to-one — than the early ballots that were received before this week, which largely favored Democrats.

Democratic candidates took early leads when the initial results of the Arizona midterm election were posted Tuesday evening, but Republican candidates soon destroyed most of the Democrats’ breathing room after more votes were added to the count late Tuesday into Wednesday.

The governor’s race, which is being watched by Republicans and Democrats across the country, remains exceedingly close, with Democratic nominee Katie Hobbs at 50.7% of the vote and her Republican opponent Kari Lake at 49.3%. But Hobbs increased her lead over Lake Thursday from about 13,000 votes to nearly 27,000.

And Democratic U.S. Sen. Mark Kelly increased his lead over Republican challenger Blake Masters from roughly 95,000 votes to almost 115,000 on Thursday, giving him 51.7% of votes to Republican Blake Masters’  Masters’ 46.1%. Libertarian Marc Victor dropped out and endorsed Masters shortly before Election Day, but his name still appeared on ballots; more than 2% of voters cast ballots for him.

Democratic secretary of state candidate Adrian Fontes grew his lead over Republican Mark Finchem from about 90,000 votes to more than 109,000 votes, an advantage of more than 5 percentage points.

Kris Mayes, the Democratic candidate for attorney general maintained a thin lead over Republican Abe Hamadeh, with 50.4% of the vote to his 49.6% for a lead of 16,414, an increase over the 4,200-vote margin she had at the beginning of Thursday.

In the race for schools chief, Superintendent of Public Instruction Kathy Hoffman, a Democrat, took a narrow lead Thursday over Republican Tom Horne, with 50.1% of the vote to his 49.9%, for a tiny lead of 3,852 votes.