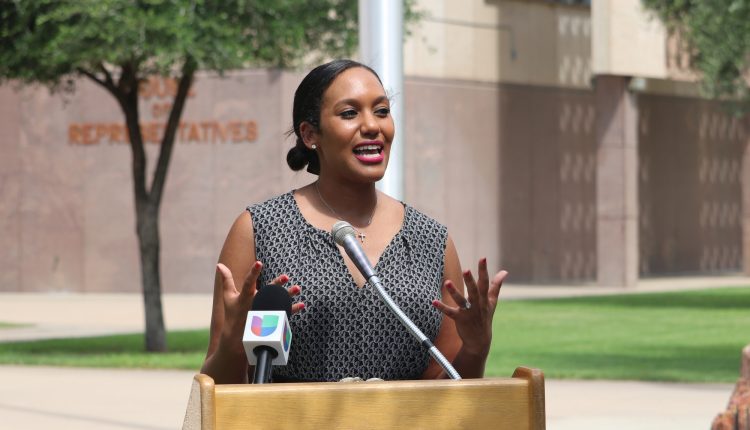 On the two-month anniversary of the Supreme Court’s decision to repeal Roe v. Wade, Arizona Democratic Party chair Raquel Terán slammed Republican U.S. Senate candidate Blake Masters, calling him dangerous for women in the state and across the country, and urging voters to reject him.

“If Blake Masters ever gets his way, women across the country could face jail time for making essential, extremely personal decisions,” she said.

Masters took hard-line positions on reproductive rights during the GOP primary, announcing his support for a nationwide personhood law for fetuses and campaigning, in part, on the promise that he would vote to confirm judges who will strike down federal protections for contraception.

These stances, Terán said, are wildly out-of-line with voter sentiment across the state.

“We are a pro-choice state,” she said. “Blake Masters: Arizonans are not with you.”

A poll conducted in February found that as much as 90% of Arizonans agree that family planning decisions should be left up to them, and free from political interference.

Masters’ campaign did not respond to a request for comment.

Restricting access to abortion services harms women with unhealthy pregnancies, warned Eva Burch, a state Senate candidate for District 9 in Mesa, who has more than 10 years of experience as a nurse.

“As a medical professional, I can tell you firsthand that women, children, families and communities will suffer,” she said.

Congenital defects in fetuses can put both the child and mother at risk, and tying the hands of physicians with abortion bans only worsens their health outcomes. Being forced to carry unwanted children, she added, has negative long-term effects: It deepens poverty for some women, and increases the likelihood of them filing for bankruptcy, being evicted or suffering food insecurity. One 2020 study of 1,000 women in 30 clinics across the country found that women who were unsuccessful in obtaining an abortion had an 81% higher likelihood of becoming bankrupt, getting evicted or recieving a tax lien. Ultimately, those are costs the surrounding community must shoulder, she said.

Conservative politicians up and down the ballot are taking aim at abortion access — and their strategies don’t end with restricting just reproductive rights, warned Planned Parenthood Arizona President Brittany Fonteno.

“Anti-abortion politicians have planned and plotted to strip us of our constitutional rights to make our own decisions about our bodies and they won’t stop with abortion. What’s next: birth control, same sex marriage, our very democracy?” she said.

While Masters has walked back some of his hard-line stances to appeal to a wider audience since the primary, Fonteno said voters should not be fooled.

“Throughout the primary campaign, both (Kari) Lake and Masters and the entire slate of so-called America-First candidates here in Arizona and across the country have talked about their reverence for a complete ban on abortion,” she said.

Lake has previously labeled abortion as “the ultimate sin” and believes that abortion restrictions should be handled by the state, not protected by the Constitution. Just this year, Arizona enacted a ban on abortions past 15 weeks, with no exceptions for rape or incest. Lake’s campaign has stated that she supports such exceptions.

In an emailed statement, Lake said: “My opponent thinks it’s ok to kill babies on the day of their birth. The media might not think that’s extreme, but I have no doubt the people of Arizona do.”

Katie Hobbs, the Democratic candidate for Arizona governor and Lake’s opponent in the race, has in fact never stated that. It is also impossible to abort babies when they’re being born. In 2017, while discussing a law that requires doctors to take all available measures to keep an infant alive when it was delivered still alive during an abortion procedure, Hobbs said it would be cruel to resuscitate an infant that survived an abortion attempt when it’s clear the child won’t survive.

Lake’s campaign didn’t respond to a question about whether she supported a complete ban, or if she would support punishments for abortion providers.

Putting anti-abortion candidates in office would invariably lead to a complete ban on abortions, and the criminalization of doctors simply trying to help their patients, Fonteno said. What it won’t do is eliminate the need for abortion access, just force women to seek potentially dangerous alternatives or travel out of state — if they can afford it.

Planned Parenthood has seven health clinics in Arizona, four of which provide abortion services. Those services were paused in June after the Supreme Court gutted federal protections for abortion, leaving thousands of women in the lurch. In 2020, the most recent year for which data is available, 13,273 Arizona women had an abortion, according to a report from the Arizona Department of Health Services.

The Planned Parenthood clinic in El Centro, Calif., saw an immediate increase in Arizonans traveling to its clinic for abortion services after the Supreme Court ruling, Fonteno told the Arizona Mirror. Since Arizona clinics have been unable to perform abortions due to a lack of legal clarity, they’ve pivoted to offering women “options counseling” when they seek help, which includes a recommendation to travel to an out-of-state clinic. Women in Maricopa County face a distance of 246 miles to the nearest abortion provider.

It’s important to remember that the women most impacted by abortion bans are from minority, low-income and rural communities, Fonteno said. In 2020, 40% of women who underwent an abortion in Arizona identified as Latina or Hispanic, and 12% identified as Black.

Ensuring that anti-abortion politicians stay out of the legislature at the federal and state level is imperative, Fonteno said. She urged voters to take action to block extremist politicians from having a say in doctor’s offices across the state and country.

At the state level, electing legislators who are for reproductive rights is a key part of protecting abortion access for women in Arizona, Teran said. She vowed to keep working with her Democratic colleagues to pass legislation to repeal the 15 week abortion ban passed this year, which goes into effect on Sept. 24. But fulfilling that goal means earning a 60 vote majority in the statehouse. The GOP has controlled the legislature and the Governor’s office since 2009.

“We as Democrats are committed to moving legislation that is pro-choice and gives legal and safe access (to abortion) to everybody. We know it’s a matter of time and getting the votes that we need. That’s why we’re working to elect Democrats,” she said.

Wastewater Surveillance Has Become a Critical Covid Tracking Tool, but Funding Is Inconsistent