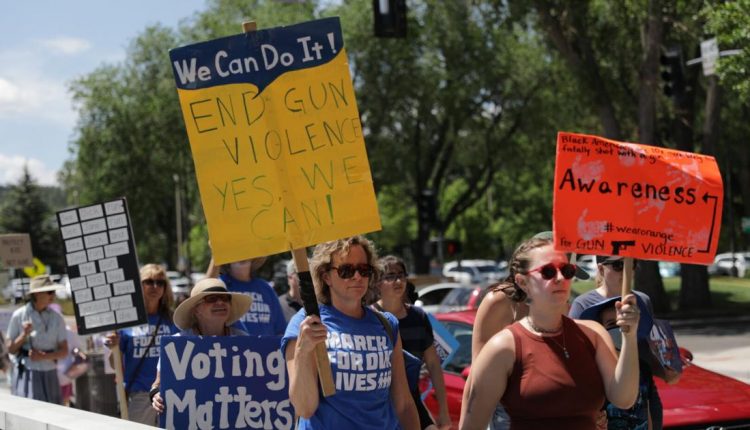 Last Saturday, a large group of March for Our Lives protestors gathered outside Flagstaff City Hall to advocate for gun reform in the wake of two recent mass shootings in Uvalde, Texas and Buffalo, New York. With loud voices and posters in hand, they expressed their frustrations to the applause of honking cars, but despite the rally’s zeal, many participants felt a great sense of disappointment in the lack of progress since the march in 2018.

Heather Duncan, the local organizer and permit holder for March for Our Lives, understands the disappointment more than most.

As a mother of two and former employees of the Flagstaff Unified School District, Duncan was inspired to join March for Our Lives after seeing the survivors of the Parkland school shooting stand up and call out those who were stonewalling common-sense gun reform, but said since the movement started in 2018, little has been done to prevent gun violence.

“Gun violence is the No. 1 cause of death among children and teens,” Duncan said, “[and] nothing has happened in the past four years since the first march, even with our new Democratic president.”

Since the last March for Our Lives protest, school shootings have been on the rise, reaching more than 100 incidents with injuries or death in the last four years — and of those, 27 have occurred just this year.

The numbers are tragic and have, unsurprisingly, spurred many educators like Duncan to action.

Megan Johnson, a second-grade teacher at Marshall Elementary School, said, “I hope marching will bring awareness to how many people support this and … maybe, hopefully, have some people challenge their own beliefs too. … My students’ lives are more important than [their] gun.”

Another former educator echoed those sentiments.

“School should be a time of learning and fun, and they shouldn’t have to be worried about an active shooter,” said Linda Whiting, a retired Arizona teacher. “[I hope] that some senators are listening and will actually let some of these gun control laws that are being debated, pass.”

While very little has been done to regulate guns in Congress, there are some bills gaining traction.

Better known as Ethan’s Law, HB 7218 just passed in the US House of Representatives and would require guns, either loaded or unloaded, to be stored properly in a location that proves to be inaccessible to individuals younger than the age of 18. This bill comes as a direct response to the death of 15-year-old Ethan Song, who was shot by a loaded and improperly stored firearm.

“Ethan, who was 15 when he died, should not have lost his life,” Song said, “however, in my family’s case, from tragedy comes hope. … It is time to start rallying your senators. I hope Senator Sinema is ready for gun safety activists from Arizona, and I hope America is ready for common sense gun legislation.”

The day after the nationwide March for Our Lives concluded, some key senators announced a bipartisan framework to curb instances of gun violence in America. While this breakthrough piece of legislation has not yet been written, it demonstrates that rallying around a cause can do more than spread awareness. It can also trace change, or at least, the beginning of it.

After Song’s speech, participants marched around downtown and back to Flagstaff City Hall in hot weather, sharing stories and shade all the way along. Though there were one or two hecklers that yelled “people kill people” from their passing cars, the waves, honks and words of affirmation showed demonstrators that Flagstaff will always be kind to those who stand up for what they believe.