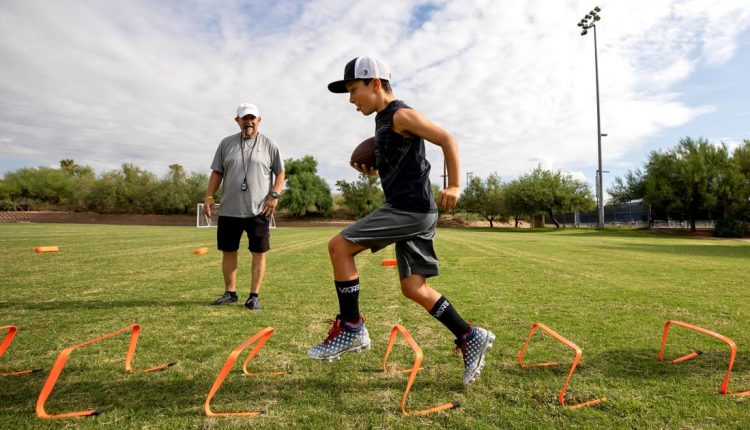 Tucson’s TGA Premier Sports has new owners, and their names are familiar to fans of Arizona Wildcats and high school sports.

TGA also teaches kids academics and life lessons. Children participate in STEAM (science, technology, engineering, art and math) activities that allow them to relate academic concepts to the sports that they’re playing. With it comes skills like perseverance and a positive mental attitude.


Alicia Hollowell Dunn helped lead the Wildcats to their seventh national title in 2006.


“That’s a lot of why I love this company, because of the curriculum that we offer, and how you can relate sports to life,” said Alicia Hollowell Dunn, a former Wildcats pitcher who led the UA to a Women’s College World Series championship in 2006 and spent two years as a pitching coach.”You might not be good at something in sports, but if you work hard, you’re going to get better at it with your perseverance. It’s the same thing in life: You might hit challenges or struggles, but you’ve got to keep grinding and working through to get past it and get through tough things in life.”

Ryan and Alicia Dunn ran sport-specific and all-sports camps this summer in Oro Valley, Marana and in the foothills. During their all-sports camps, kids played different games every day, from flag football and ultimate frisbee to floor hockey and lacrosse. The three-hour sessions started at 8 am

Coaches were hired by the Dunns, and equipment was provided to campers at no extra cost.

Tim Kennedy coached three week-long camps: one week of flag football and two weeks of the all-sports camp. He liked what he saw.

When the school year began, TGA of Tucson shifted its focus to after-school programs.

These programs are offered in every Catalina Foothills elementary and middle schools, the Leman Academies at the Marana, Oro Valley and east Tucson locations and other private schools like Casas Christian School and Saints Peter and Paul Catholic School. The sports offered at each after-care program are dependent on the schools.

Coaches stay until 5 pm and bring all necessary equipment.


Alicia Hollowell Dunn says two types of students typically sign up for the after-school programs: Ones who want to try new sports and the ones who are already in aftercare and want to play.

Students participate in activities that exercise skills like leadership and teamwork while also gathering an understanding of their sports’ history, rules and etiquette.

Ryan and Alicia Dunn’s passion for sports and child development is evident in their work at TGA of Tucson. They’re athletes and coaches, yes. But they’re also parents to two small children.


“We were all-in in buying it because we know how important sports are to kids,” Alicia Hollowell Dunn said. “Especially nowadays, so many people are more standing on tablets and spending a lot of time on phones, and so just being as active as possible and having that the social interaction. Especially with everything that the country has gone through in the last couple of years, being able to get out and be active and be outside it’s been really, really important.”