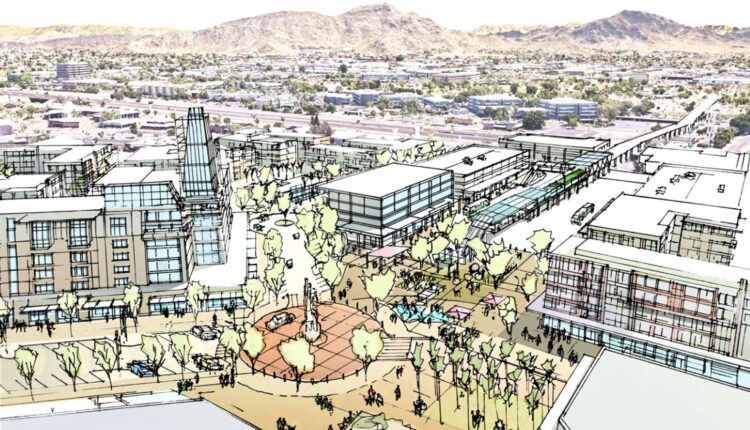 Developers close on Metrocenter Mall with $850M redevelopment to begin

PHOENIX — Developers have closed on the purchase of Metrocenter Mall in Phoenix with $850 million redevelopment plans to begin immediately.

Concord Wilshire Capital and TLG Investment Partners, in partnership with international real estate firm Hines, will transform the iconic mall into a walkable village with 2,600 multifamily units and 150,000 square feet of commercial space.

The property, which includes the Dillard’s and U-Haul buildings, is located just west of Interstate 17 between Dunlap and Peoria avenues.

“Metrocenter has memories for so many of us in Phoenix,” Phoenix Mayor Kate Gallego said in a press release.

“As we look to the future, Metrocenter now means jobs, attainable housing and restoring community strength to northwest Phoenix.”

The property will add an amphitheater, pedestrian and bicycle pathways, a walkable retail promenade, restaurants and immersive water features in addition to the residential development.

Existing amenities that will remain include a Walmart Supercenter, a public library, Rose Mofford Park and a theme park.

The community will also be served by a new light rail station scheduled to open in 2024 as part of Valley Metro’s $401 million Northwest Extension.

“I could not be more excited for this next step towards bringing this incredible vision to reality,” Councilwoman Ann O’Brien said in the release.

“I grew up going to Metrocenter and worked one of my first jobs here. It’s bittersweet, but with change comes new opportunity.”

After years of struggles that saw it become more of a ghost town than a shopping center, the mall closed for good in June 2020.

Latino Teens Are Deputized as Health Educators to Sway the Unvaccinated