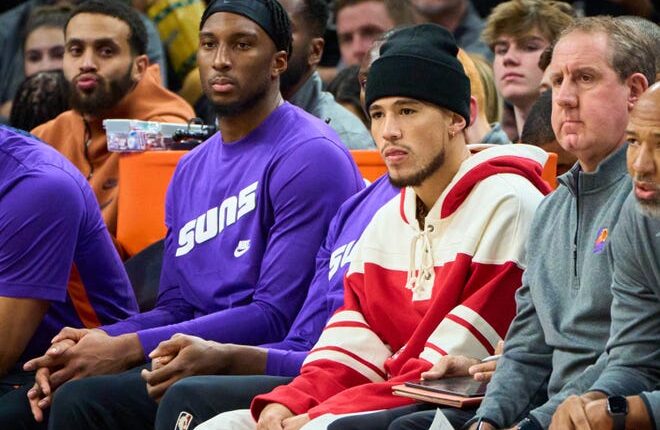 Devin Booker will miss a second straight game with groin soreness when the Phoenix Suns (19-12) play the Washington Wizards (11-20) in the second of a back-to-back Tuesday night at Footprint Center.

Jock Landale (concussion protocol) and Cameron Payne (right foot sprain) are also out, as is Josh Okogie (right hip soreness), who only played 10 minutes in Monday’s home win over the Lakers.

“It happened in the first half,” Suns coach Monty Williams said after the game about Okogie. “He tried to give it a go (in the second half).”

The Wizards will be without Rui Hachimura (right ankle soreness) and Delon Wright (right hamstring strain). Kristaps Porzingis is questionable with a non-COVID illness. The Wizards have lost their last 10 games.

Booker had missed two games with hamstring tightness last week at New Orleans and at Houston before returning Thursday night against the Clippers to conclude a four-game road trip.

Two nights later, Booker scored an epic season-high 58 points in Saturday’s comeback win over the Pelicans to begin the four-game homestand, but he logged 42 minutes in just his second game back.

“Let’s be straight, I played him way too many minutes,” Williams said before Monday’s win. “That’s the bottom line. I can’t look at anybody but myself when I put one of our players in harm’s way. That’s a tough one to swallow. It’s just no other way to look at it. He’s fighting his tail off to help us get a win, but I have to protect our players.”

Booker played the entire second half against the Pelicans, and 36 of his 58 points came after halftime.

“I know I push our guys,” Williams said. “I’m not blinded by that. At the same time, we’re all competitive and trying to get a win, but that’s not a blamer. I have to look at me and the things I did.”

Damion Lee started for Booker and score 15 points, hitting 5-of-10 from 3, in Monday’s win. It was Lee’s first start of the season in his first year in Phoenix.

Payne will miss his third straight game after going down in the first half of last week’s loss against the Rockets; Landale will sit a second consecutive game.

“He got banged (at home against New Orleans), that’s what I do know,” Williams said about Landale. “I was asking the coaches when did it happen and all looked at me like I was the dufus that I am. They were like, you missed it. He got hit in the face real hard and he played through it. Then once they put him through the tests, they were like bro, you’ve got a concussion.”

Williams added Landale has a history of concussions dating back last season in San Antonio.

“He had a bad one and he was out for like two weeks,” Williams said. “You have to be really careful when a guy has that kind of history. I talked to him (Sunday) and he was like, ‘Coach, it’s not as bad,’ but they got to wait and see. He’s got to go through all the testing. He’s a guy, like most NBA players, it just kills him that he can’t be out there. So it’s just a tough one.”

Suns are getting two-way player Duane Washington Jr. (hip) back for Tuesday’s game. He has missed Phoenix’s last eight games.

Give the gift of a live Tucson performance