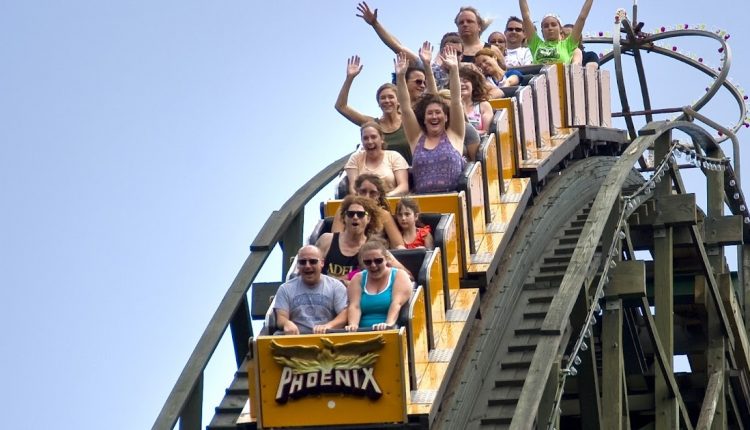 Over the weekend, Knoebels Amusement Resort President, Dick Knoebel, was recognized as an amusement industry legend. The park’s Phoenix roller coaster and their food were also named #1 in the world at the annual Golden Ticket Awards ceremony.

According to Amusement Today, an individual is recognized as a legend “because of their major accomplishments or their long-running status of noteworthy effort.”

“Having established a legacy of the finest of principles, values, dedication and vision within the amusement industry, Amusement Today is thrilled to recognize Dick Knoebel as a Golden Ticket Awards Legend,” they wrote.

“The award was a total surprise – I’m honored and humbled,” said Knoebel. “I think about everything that’s been accomplished by my staff, and believe this award is every bit as much theirs.”

Knoebels’ Phoenix was named the #1 wooden roller coaster in the world for the fourth consecutive year. Phoenix has made the top ten each year for 24 years.

“We’re thrilled Phoenix has been recognized again with this prestigious award,” said Knoebel. “Our team is dedicated to meticulously maintaining every inch of Phoenix’s 3,200 feet of track. This ensures guests can enjoy a world class experience from start to finish.”

Knoebel added that it has been 75 years since this roller coaster opened as the Rocket at Playland Park in San Antonio, making accepting this award in San Antonio even more special.

When Playland Park closed in 1980, the future of the roller coaster was uncertain. Knoebels disassembled, moved, and reassembled the coaster. Phoenix opened in June of 1985 and has been a favorite since.

While this year was the fourth year Phoenix captured the #1 spot, there’s a 2022 award Knoebels has secured 19 times in 22 years: Best food.

“We’re proud to offer a variety of delicious food at great prices,” said Knoebel. “Our team continues to innovate with menu additions from year to year. But what’s just as important, is we listen to guest feedback and reintroduce items guests have been asking for.”

The awards are calculated from an international poll. The survey is sent to a database of experienced and well-traveled amusement park fans asking them to rate the “best of the best” in the industry.

Tucson ranked as #2 bike-friendly city in US