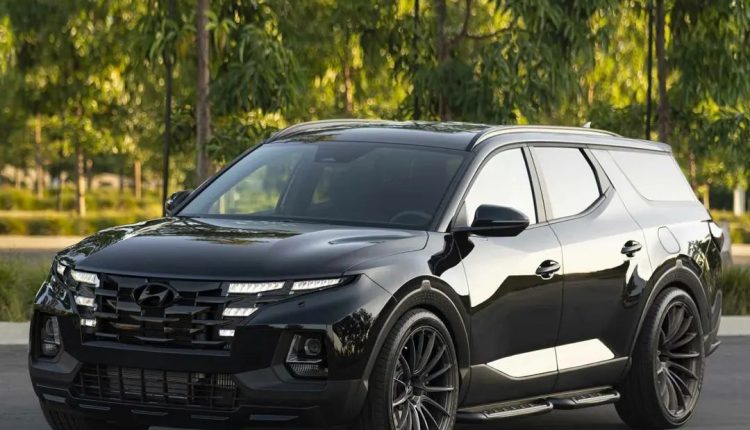 What happens when you are as dark as sleeping hours and others steal your show although you were first at the party – at least with the idea? Well, you can always morph into something else.

Probably aiming to go about its business as stealthy as possible so that people forget it got thoroughly spanked by the Ford Maverick unibody compact pickup truck in terms of sales, the 2023 Hyundai Santa Cruz greeted the new model year with a fresh ‘Night’ version that recently joined the lineup. Alas, it still attracted people’s attention, even if only virtually.

Nikita Chuicko, the virtual artist better known as Kelsonik on social media, seems to have a soft spot for the pocket truck as we have seen quite a few digital Hyundai Santa Cruz transformations since the model’s official introduction. Some were dealing with hypothetical aftermarket personalization ideas, but others were deeply unsettling, as they explored the thought of making the Hyundai Tucson very envious of a Santa Cruz SUV!

And soon after Hyundai updated Santa Cruz for the new model year, it seems that Pandora’s Box was opened yet again. First, it was a casual night edition that felt virtually custom when lowered on humongous, aftermarket wheels. But, as it turns out, that was probably just the appetizer. So, after a nice yet profoundly serious Kia Sorento with a lowered suspension setup and two types of new CGI wheels (also embedded below, for reference), now it is time to meet the latest Hyundai Santa Cruz Night SUV project.

It seems this pixel master is indeed a creature of digital habits. Thus, all the usual suspects are here – including the tougher and more spacious look compared to the Tucson sibling, plus a nice attempt at slamming the atmosphere a bit on a big set of matching-color, aftermarket wheels. So, does it get our CGI hall pass, or not?