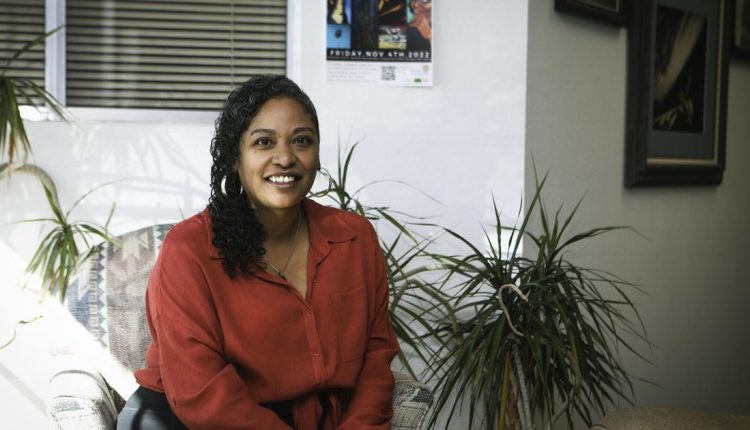 After more than a decade of work in environmental activism and social justice, Jihan Gearon was burned out.

She’d studied earth systems, energy and technology at Stanford University. Most of her classmates went on to work for companies like Shell and ConocoPhillips. Many of them, Gearon said, left class in BMWs.

Gearon chose to harness her education in the “opposite way.” She was bound for a different BMW, the Black Mesa Water Coalition — an organization founded to protect water resources.

Under Black Mesa, a region home to two mines that fuel two coal-fired power plants, is the Navajo Aquifer. The aquifer is the soul source of drinking water for much of the region.

While BMW’s main focus is on water conservation and protection, Gearon joined during a time when the organization was focusing on building alternative economies.

“We did renewable energy work, particularly on solar in the Black Mesa region,” Gearon said. “We worked on the Navajo Wool Market Improvement Project, wool production and also food sovereignty projects. We said to ourselves, ‘What do Navajos already do, and how can we help that be lifted up as an economic project?’”

Gearon, who is Dine, graduated from Window Rock High School and grew up around Fort Defiance, but she always had a thirst for adventure. It was a thirst to travel beyond her home on the reservation.

“When I was a young person I really saw the reservation life as something to leave and escape from. I grew up with a lot of alcoholism and not a lot of opportunities. Not good schools, not a lot of stuff. That, tied with my need and want to be an adventurer, I was set on getting out of there,” she said. “When I really started to look at the reservation and why it’s like that, I started to understand why. That’s what really motivated me.”

Not long into her career, she worked for Indigenous Environmental Network (IEN), which took her to the Dakotas, Ponca, Oklahoma, and Passamaquoddy, Maine.

The work of organizing, fundraising, and running organizations like IEN and BMW was taxing, Gearon said. In 2017, she was diagnosed with endometrial cancer.

“I had reached a point where my body was like, ‘Stop now!’ That’s how intense it was,” she said.

When Gearon got the opportunity for a break in the form of a fellowship award, she was ready to seize her moment. That moment, however, was reshaped immediately when COVID-19 emerged on the scene. Instead of booking tickets to far away places like she planned, she started traveling inward.

Gearon took an art class and a writing class, and started to reflect on what a new path might look like for her. She found inspiration in dreams, life experiences and friends who were already established artists.

“I have a friend,” she said, “who is an opera singer, and I was like, ‘God, I wish I could sing!’ She was like, ‘You can sing! This idea that people shouldn’t sing unless they’re good or they can make money off of it is wrong.’ It’s not what singing is for!”

In exploring art, Gearon discovered she did have a knack for it. She started with bold lines on canvas and developed a style of layering “multiple paintings in one,” often opting to use a sponge in her work.

“This is a try in this direction to see how it works,” said Gearon.

The “try” she is talking about is an exhibition at the Historic Ice House in downtown Flagstaff hosted by local nonprofit Culture Connection AZ. The show, titled “Surrender,” opens during today’s First Friday Art Walk. Gearon exhibited her work before at Fire Creek Coffee House and during the Flagstaff Mountain Film Festival.

But this will be her first solo show.

Culture Connection does not take any commission from the sales of artists’ work. Instead, they compensate for overhead costs in reception ticket sales. Their hope is to foster growth in the art community and nurture a space that is welcoming and accessible for gallerists and visitors alike — that’s according to founder and executive director Audra Travelbee.

Travelbee describes Gearon’s work as “Magical realism if it were an art style instead of just a literary style.” She’s looking forward to seeing how the work is received at the First Friday show.

“You’ll see, in one of my paintings of the San Francisco Peaks, I put a dragon on top,” said Gearon, with an infectious laugh. She lights up when describing her art. “There’s an abalone shell in it. It’s not the color of trees. Because I want people to understand more of what the Navajo say about that mountain, the colors associated with it, the emotions associated with it, the teaching associated. How can I show that visually to non-Navajo people?”

At forty, she gives herself space to learn and cultivate her newfound passion and career. She describes the act of forming clouds, taking hours to find the right flow, the right shape. Sometimes, in bringing her visions to life, she seeks divine guidance.

“I believe in the spiritual realm and that I have guides and guardians in that realm, and I can talk to them and things like that. I’ll just be like sitting in front of my piece, and I’ll say, ‘If I want it to look like this, how do I do it?’ And I’ll get a thought in my head,” Gearon said, “I remember one instance where I was painting this tree, and I was like, ‘OK, how should I do this?’ They’re like, ‘You should paint turquoise over it!’ and I was like, ‘I don’t think that’s right … ‘, but when I did it, it was!”

For her, art is not a path away from activism work, even if she is trading in her grant-writing pen for a paint brush. The artistic journey is bringing her toward something.

“I think art can help people to better understand and better discuss complexity — which I think we need now in our regular world, but also in the activist world,” Gearon said. “What do we do when for so long we’ve been operating, as organizers, by competing for who has it worse off? I always remember when I was writing proposals and stuff, I would be like, ‘We’re the most impacted, and here are all the statistics.’ It’s kind of like you’re trying to explain how pitiful you are so that they’ll fund you– which is so wrong. It actually doesn’t help in movement-building spaces.

“We need to find a framework for those discussions to happen more successfully. I think art can do that.”

Gearon said she’s working on a few ideas for installations that focus on social justice issues. She’s talking with the Coconino Center for the Arts about a show next year, and all the while she’s been painting pieces for today’s show.

“I want my friends and family and colleagues to come. People who have known me always as an activist to see me going on this artist journey over the past few years. I want them to see me, and see this new side of me. I’m excited about that,” Gearon said.