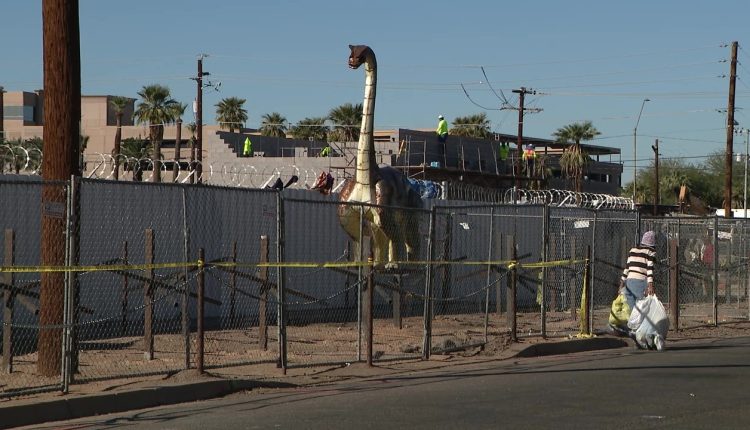 It looks like a dinosaur invasion of sorts, as two sculptures of the famous extinct animal showed up in a part of Phoenix that has been blighted by a homelessness problem. The sculptures, however, are causing some controversy. FOX 10’s Stephanie Bennett reports.

The dinosaurs come in the form of two statues that someone installed near 9th Avenue and Jackson. It’s a part of town often referred to as “the zone,” an area where the homeless crisis has exploded, as there are more than a thousand unsheltered people living on the streets at certain points in recent years, and people in the area are unhappy about the homeless population that has congregated.

Construction workers at a building in the area say the art installation, consisting of a metal triceratops and a brontosaurus, popped up earlier in the week. Nearby businesses are not sure who installed them, or why, but homeless campers are not too pleased about them, as the installation takes up their valuable sidewalk space.

“They basically kicked them out from over there, so they could put their dinosaurs there,” said Jaquan Brown. “It really hurts us because that’s what basically where everybody used to stay. Like, the whole block was filled with everybody, and they had to move to a different location, and it’s hard on us because basically that’s where we lived at.”

In a statement, officials with the City of Phoenix say the sculptures need to go.

“The Street Transportation Department has informed the property owner that the structures are not authorized or permitted, and need to be removed from the public right of way,” read a portion of the statement.”

“I, like, want them moved. If I had the choice, I would move them today,” said Brown.

We reached out to the potential owner of the property, but have not heard back.