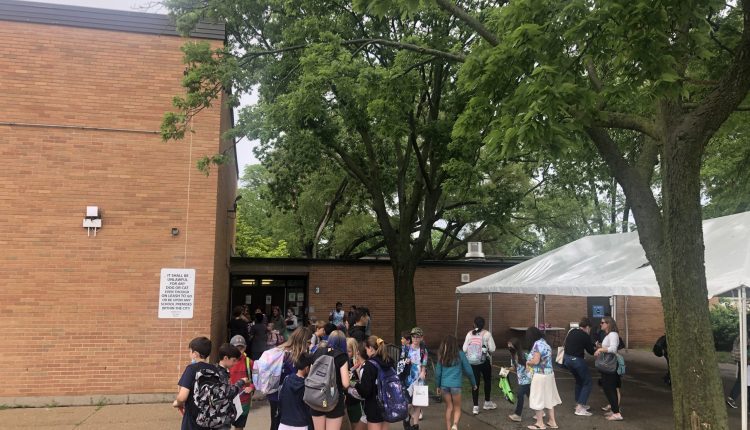 Students gather outside Walker Elementary School after dismissal on the last day of the year. Credit: Duncan Agnew

Students in kindergarten through seventh grade in Evanston/Skokie School District 65 finished the academic year as they departed their school buildings for the final time this spring on Wednesday afternoon.

Parents, teachers and students were greeted with a deluge of rain as magnet schools and middle schools held dismissal, though, which put a damper on some of the usual celebrations of kids joyously running out of buildings as the bell rings on the last day of school . Still, they said they were excited to finish the year and begin a restful, relaxing and fun summer.

At Dr. Martin Luther King Jr. Literary and Fine Arts School, a crossing guard in a bright yellow raincoat and rain pants directed traffic while shouting, “Have a good summer! be good!” to students through the downpour. After walking out of the school to greet her parents, one student said, “A little rain never hurts anyone.”

The King Arts crossing guard directed traffic and said, “Have a good summer!” to students through the rain. Credit: Duncan Agnew

Even with the inclement weather, hugs and congratulations filled the dismissal area around King Arts.

“You’re done with first grade,” one mom told her son as he left school for the last time this year. “I’m so proud of you.”

Many teachers at Walker held flowers and gifts from parents and students, and the students themselves carried goodie bags from the final day and posters from projects they had left in their classrooms during the year.

Elsa Wenzel, the mom of a first and fourth grader at Dewey Elementary School, told the RoundTable that her kids didn’t want the year to end, but they are also relieved to have successfully finished another year of school, especially the first year back in person during the pandemic.

Wenzel thanked their teachers for their support throughout a challenging year.

Despite growing up in Chicago and having family in Evanston, Wenzel, her husband and her kids only moved to Evanston last summer. They can’t wait to spend time at Evanston’s beaches on Lake Michigan over the next few months, and her kids are excited to partake in the city’s EcoQuest camp and an Actors Gymnasium camp, as well.

“We hope the Dewey community will come together with the District 65 administration to deliver a safe, welcoming learning environment for every child in the 2022-23 school year,” Wenzel wrote in an email to the RoundTable. “We aspire for the next school year to move beyond the phase of returning to ‘normal’ and into a new phase that puts children first, broadening their opportunities for enrichment and closing learning gaps. We look forward to a fresh start for everyone in August.”

Haven Middle School language arts teacher Elizabeth Jackson, who received an involuntary transfer to Nichols Middle School for the 2022-23 academic year, penned a final farewell note to her sixth grade students on Wednesday morning. After 10 years at Haven, Jackson wrote in her message to students that “today is an especially hard goodbye for me.”

“After a very difficult couple of years, you, as a group, have revived my joy in teaching and my hope for the future,” Jackson said. “You are curious, funny, kind problem-solvers, and that is what this world needs.”

Haven experienced a tumultuous year that included a number of student fights that ended in teachers sustaining injuries. On at least two occasions, staff members had to go to the hospital. And three nooses also were discovered in a tree between Haven and Kingsley Elementary School, an incident the Evanston Police Department continues to investigate as a potential hate crime.

“I expect you to continue to represent Haven well and disregard what adults who don’t know you might say about you or your school,” Jackson wrote.

Jackson also asked her students to write messages of advice for the incoming sixth-graders at Haven, and many of them talked about how middle school can be intimidating and a scary transition, but they encouraged the new sixth-graders to make new friends, be respectful and take advantage of the great teachers and staff at Haven.

“Middle school can be a lot harder than elementary school,” one student wrote. “However, your whole school community will still expect you to be safe and kind, and welcome everyone new to Haven. We had a hard year last year, and it is up to you, and the higher grades, to make our school the best place it can be.”

Black rifles are the favorite of mass shooters. To save lives, these guns have to go

‘I don’t want it to happen again’