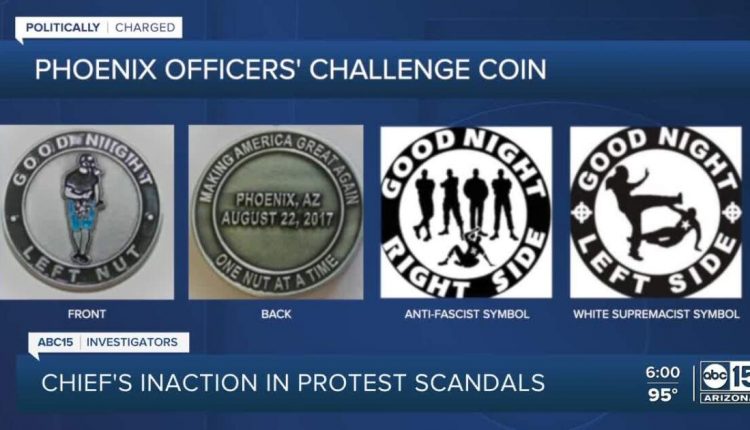 As part of a sweeping pattern-of-practice civil rights probe, the Department of Justice has interviewed the citizen mockingly depicted in a hate-speech-inspired challenge coin that was shared, sold, and traded by Phoenix police officers to celebrate the department’s violence against the protesters.

Joshua Cobin told ABC15 that he spoke to a DOJ attorney earlier this month for nearly 45 minutes.

The topics of the interview covered the city’s controversial response to the August 22, 2017 protest and the celebratory memorabilia that was created afterwards, Cobin said.

DOJ officials announced a sweeping investigation of Phoenix police in late summer 2021 with a significant focus on how the city treats demonstrators.

ABC15 widely exposed the existence of the coin in its “Politically Charged” investigation last year.

The station discovered Chief Jeri Williams was questioned about the coin and shown pictures during a deposition in 2019.

But she failed to take any action or look into the matter further, records show.

ABC15’s reports prompted the City of Phoenix to hire a law firm to conduct an outside fact-finding investigation, which led to Williams receiving a written reprimand because of a “lack of follow-up by executive police leadership.”

Williams’ failure to recognize and address problems with her protest response team are surfacing again after a series of secret recordings obtained by ABC15 captured top cops discussing a related scandal involving demonstrators.

In “Politically Charged,” ABC15 also revealed Phoenix officers colluded with county prosecutors to invent a fictional gang and then charge protesters as members.

Williams claimed she didn’t know about the plan prior to indictments and remained unaware.

In the recordings, Williams’ second-in-command, Assistant Chief Mike Kurtenbach, told fellow officers it was “absolutely insane” for the chief to claim she wasn’t aware of the case before ABC15’s reports.

“The boss herself knew about this for months,” Kurtenbach said. “We didn’t hide it.”

Some of the key officers in falsely charging protesters as gang members also possessed the challenge coin, records show.

Three days following the 2017 protest, McBride posted the image depicted on the coin on his Facebook page. He wrote: “My team’s new patch since Tuesday!!” [The image on the coin was also used to make T-shirts, hats, patches, and other memorabilia, which was shared within the Phoenix Police Department.]

In 2020, McBride was a central figure in the protest gang scandal.

ABC15 obtained transcripts from a confidential grand jury proceeding. Under oath, McBride song and exaggerated about evidence against protesters. He also tested that a group of protesters was comparable to the Bloods, Crips, and Hells Angels.

Phoenix police officials did not immediately respond to a request for comment for this report.

Pedestrian fatals surge in Tucson amid search for answers