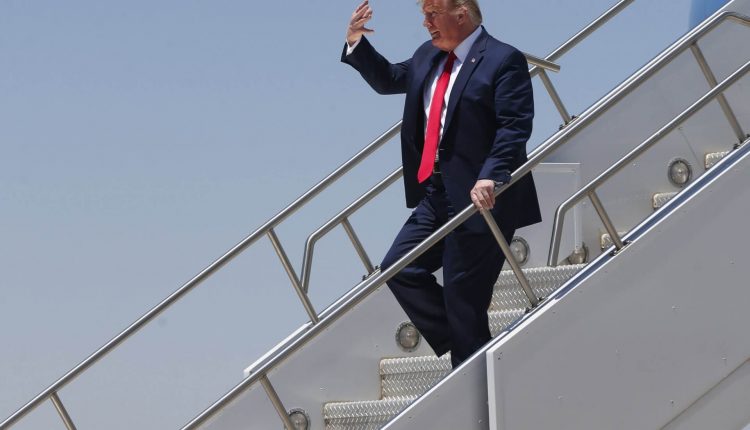 Former President Donald Trump and former Vice President Mike Pence will hold dueling events in Arizona on Friday, each supporting a different Republican candidate for governor — further cementing the divides between the party’s Trump loyalists and those seeking to move away from the former president’s legacy.

Trump will be holding his “Save America Rally” at the Tim’s Toyota Center in Prescott Valley, a part of the state known for its conservative politics and battles with far-right extremism. Speakers at the event include a series of Trump-endorsed candidates: gubernatorial hopeful Kari Lake, U.S. Senate candidate Blake Masters, secretary of state candidate Mark Finchem and Abe Hamadeh, who is running for attorney general.

Pence will be holding two separate events with developer Karin Taylor Robson in the state. The first event will take place at a business that manufactures tactical equipment for law enforcement in Peoria alongside Gov. Doug Ducey in the morning with other speakers who have yet to be announced. Later, Pence, Ducey and Robson will travel to the National Border Patrol Council’s Office in Tucson where they’ll hear a “border briefing” from Brandon Judd, according to campaign spokesman Matthew Benson.

While Trump’s events will be his typical bombastic rallies where tickets are available to those who are quick enough to get tickets, Robson will be holding more traditional campaign events that are open to the media but only be attended by those who are campaign staff and members of the businesses taking part in the event.

The Trump rally was initially scheduled for last week but was postponed due to the passing of his first wife Ivana Trump, who passed away in New York at the age of 73. This will be Trump’s second rally in Arizona this year; his first was in Florence in January.

The list of speakers for Trump’s also includes election dead-ender and MyPillow CEO Mike Lindell, Arizona Republican Party Chairwoman Kelli Ward and Pinal County Sheriff Mark Lamb, who has been prominently featured in a slew of campaign videos for Masters this week that echo language from the “Great Replacement” conspiracy theory

Robson has been attempting to close her gap with Lake and polling has shown that some of her efforts may be working as the developer turned gubernatorial candidate has slashed a 20 percentage point lead by Lake to less than 4 points, according to polling conducted prior to early voting starting.

Robson has the support of heavyweight fundraisers like Ducey, who is also head of the Republican Governors Association, which works to elect governors across the country. It is not immediately clear whether he will deploy the resources of the RGA to help Robson, as he has done in GOP primary contests for governor in Georgia, Virginia and elsewhere.

Trump and Pence however have come head-to-head already in the Georgia primary where the former vice president endorsed renominating Gov. Brian Kemp over Trump’s pick, David Perdue. Kemp won his primary by a wide margin.

This has led to a schism among Arizona Republicans with some claiming it is the “RINOs” or “Republicans in name only” versus the “establishment.” Those in the Trump camp claiming those supporting Robson are the “RINOs,” a pejorative that has become popular among Trump acolytes.

“Pence is setting himself up to be embarrassed,” Sen. Wendy Rogers, R-Flagstaff, said on social media about the upcoming rally. Rogers also said that Pence had “backstabbed” Trump and to vote for “#TeamMAGA” candidates in the primary. “It is one chance to tell your enemies we aren’t going to fall to the marxists in Arizona.”

Other members of the far-right also have taken to social media to express their distrust and anger at the former vice president. One account that is associated with the white nationalist groyper movement called Pence a “traitor” to the people who voted for Trump, encouraging their followers to vote for “America First” candidates like Lake.

The rallies also come as Pence still has yet to comment on testimony from the January 6 committee in which witnesses told investigators that Trump appeared supportive of those looking to hang Pence during the attack on the Capitol.

Trump has said he anticipates announcing a bid for president in 2024 soon and others have speculated that Pence is strongly considering a run, as well.

Parents Become Drug Developers to Save Their Children’s Lives