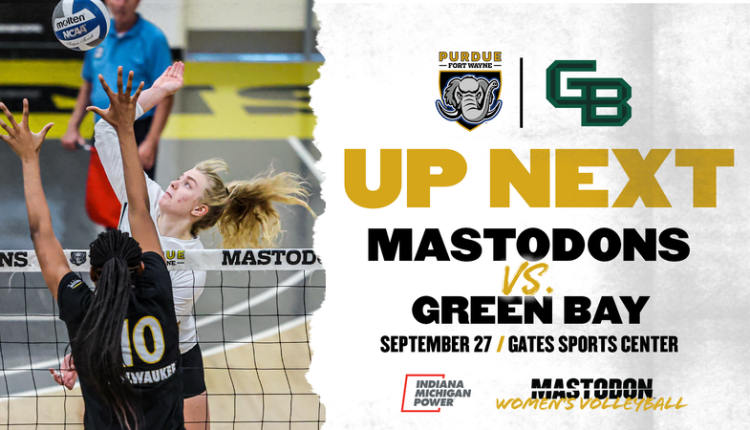 Green Bay is 12-5 and a perfect 3-0 in Horizon League matches. The Phoenix only lost one set in a four-setter with Youngstown State. GB hasn’t lost since September 13, which was a loss at No. 19 marquettes. Alexandra Zakutney and Tiffany Paalman are the two biggest threats on Green Bay’s roster, both averaging over 3.50 kills per set. Both have been named Horizon League Player of the Week once this season. Calli Gentry is pacing the offense that hits .258 by dishing out 9.87 assists per set. Kayla Lass has a team-leading 3.90 dig per set mark.

Purdue Fort Wayne and Green Bay have split the 12-match series evenly down the middle. The Mastodons won the last meeting 3-1 in Green Bay in 2021 and the Phoenix won the previous two, both in five sets.

Rachael Crucis and LonDynn Betts had 26 and 20 digs, respectively, in the Mastodons’ five-set win at IUPUI. This was the first time since 2018 that two Mastodons had 20 or more digs in a match.

In Horizon League action, Iris Riegel and Sidney Schiller have been a one-two punch on the pins. Riegel is averaging 3.88 kills per set and Schiller is right behind at 3.38.

In the first Horizon League match of her career, Iris Riegel had 18 kills with a .500 hitting percentage against Milwaukee. Both were season-best marks at the time.

I Dig That Stat!

Rachael Crucis is in the top-four in program history in digs per set and career digs.
Digs Per Set

The Mastodons came away with a five-set win over IUPUI on Saturday (Sept. 24). Sidney Schiller had a 19-kill, 19-dig performance.

Purdue Fort Wayne will hit the road for a pair of Horizon League matches to the east. The ‘Dons will play at Robert Morris on Friday (Sept. 30) and Youngstown State on Saturday (Oct. 1).