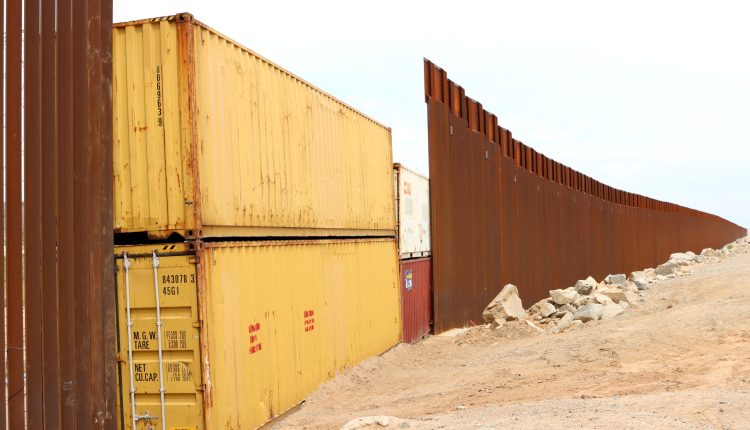 YUMA – Using old shipping containers isn’t a permanent or effective solution to secure the southern border, as state and Yuma officials know. Now, the political stunt is embroiled in a legal battle with the federal government.

In August, Gov. Doug Ducey issued an executive order to place empty shipping containers in several gaps in the border fence near Yuma. The containers, stacked two high, are topped with razor wire. The goal isn’t to stop everyone, which Ducey said is impossible, but he’s confident the big metal boxes will slow the flow of border crossings.

“The idea behind the shipping containers is that they’re available,” Ducey said in a news conference in September. “They are affordable and they’re effective. I think the ideal situation is more of a permanent solution, and there’s no perfect solution.”

At the border later that month, the multicolored containers sat while steel beams that were to be installed in the gaps over the years were loaded onto 18 wheelers and shipped to other parts of the border where gaps exist in the fence. As the trucks crawled along a dirt path adjacent to the border, Ducey stood proudly in front of the shipping containers.

Javier Flores, who was driving one of the trucks, doesn’t think the containers work as even a temporary solution.

“Do you think they are of much use? I have a video of the people on top of the containers yesterday,” he said in September.

In August, some of the containers toppled over, which the governor’s office attributed to people knocking over the 8,800-pound metal boxes. To date, 130 containers have been placed on the border.

“I think it’s part of a Band-Aid solution that is only thinking about the border wall as this regiment – as this standalone – that’s going to solve our issues,” Orozco said.

The containers also are controversial for environmental reasons. Sierra Club borderlands director Erick Meza said the bulky containers could be obstacles for migrating animals in the Yuma area.

“I think no wall is the solution,” Meza said. “Remove some of the segments of the walls on these priority areas using technology if you want. But really, I think the keys on the solutions are on addressing root causes” of migration.

On Oct. 14, the Bureau of Reclamation sent an email to the Arizona Department of Homeland Security and the Arizona Division of Emergency Management saying that the placement of the containers is trespassing on federal land and requesting the state stop placing containers on federal and Cocopah tribal land.

In the same email, the bureau said Customs and Border Protection already had awarded a contract to fill the gaps along where Arizona placed the containers. It also said the state was actively interfering with the process the bureau had underway to fill the gaps – and that it was a violation of federal law.

Ducey responded with a lawsuit Oct. 21, claiming he had the power to make the decision to place the containers on the border through his gubernatorial “emergency powers.” In August, Ducey declared a state of emergency regarding the increased flow of migrants crossing the border illegally, and as a result, he authorized the placement of the containers.

Photos of shipping container placed by order of Gov. Doug Ducey for a border wall in critical jaguar habitat in the Huachuca Mountains in Coronado National Forest. Photo by Russ McSpadden | Center for Biological Diversity

According to CBP data, the Yuma sector of the U.S.-Mexico border saw more than 300,000 with Border Patrol officers in fiscal 2022. This is an increase of over 170% in encounters in fiscal year 2021, which leads the nation by a wide margin. It also is the third busiest corridor for illegal border crossings in the country, according to CBP.

Yuma Mayor Doug Nicholls said in September that despite the state’s stopgaps, they still “won’t have a dramatic impact” until federal help comes in and fills the gaps with steel beams.

The sentiment that Yuma is powerless in its immigration problem is shared by both city and county officials. Yuma County Supervisor Jonathan Lines knows the federal government is the only entity that can create a permanent border barrier.

Lines, Nicholls and Ducey said the state stepped in because of the increased demand and lack of resources that Yuma and other border cities have been facing as a result of migrant influx. Plugging holes in the border fence with the containers gives them more “operational control,” they said.

“Until you maintain control, you can’t really address the overall problem of legal immigration. You have to get control of the border of the situation first,” Lines said.

Orozco said that because of this year’s midterms, the phrase “operational control” is being used to appease voters’ anxieties about the border, which becomes a “figurative character” to voters around election time and the complexities around border policy go ignored.

“I think the idea of having control of the border is very mythical,” he said. “Operational control, I think, is just playing to a lot of the particulars or massaging a lot of anxieties during this election cycle.”

Lines said Sen. Mark Kelly, D-Ariz., has been the lone voice in the federal government who has acknowledged the help needed to secure the border, but no official timetable has been set for when help will arrive. Kelly’s office did not respond to a request for comment.

In August, Kelly, along with fellow Arizona Democratic Sen. Kyrsten Sinema and two other senators, introduced a bipartisan bill to increase the wages and ranks of Border Patrol agents. Kelly also has sponsored a bill to use newer technologies to deter drugs, including fentanyl, from coming across the border.

Although Lines and Ducey highlighted drugs as the reason for plugging gaps in the fence, Nicholls said overall safety and control of the situation were top priorities. The only option is to rely on the federal government, he said, and the permanent solution can only come from them.

“The ball is in their court,” Nicholls said. “We’re always willing to be at the table.”