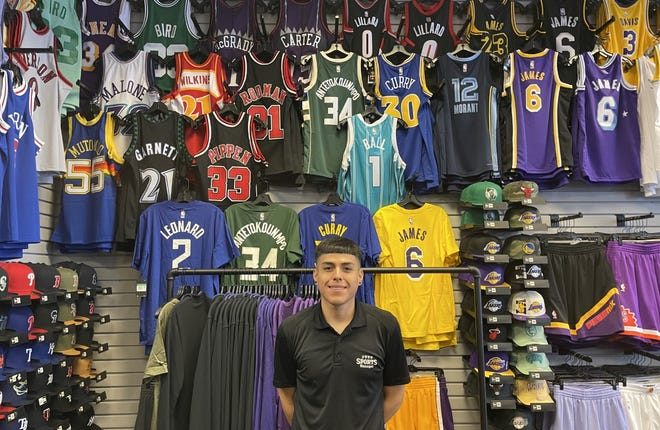 The start of the Phoenix Suns season on Wednesday night at Footprint Center also signals a potential boost for downtown area businesses located near the arena.

The Suns open the 82-game season at 7 pm, at home against the Dallas Mavericks, the team that eliminated Phoenix from the NBA playoffs in Game 7 of the Western Conference semifinals last season.

Several bars and restaurants, along with other shops, are looking forward to a boost in business on game nights

That’s the case for Willie’s Taco Joint, located next to the Footprint Center,

“We get super busy for Suns games. We get a good crowd before the games and after the games. They’re big drinkers, so it’s a fun environment to be in,” said Dani Lee, a shift manager.

The bartenders at Willie’s Taco Joint also are working on creating Suns-themed drinks that will debut throughout the season, she said.

The Suns’ winning ways over the past two seasons helped generate fan interest, but that period also coincided with the COVID-19 pandemic, which was a challenge for many businesses. But, with restrictions now largely lifted in Phoenix, bars and restaurants have returned to normal.

Willie’s isn’t the only business that gets crowded before a Suns game. Down the street, at The Kettle Black, fans pile in for pregame food and drink.

“The Suns season is the best,” said bartender Alex Whaley. “It’s crazy, we run ragged, but at the end of the day, it’s great fun. The energy is great, and everyone has a good time.”

At places like Chipotle and The Yard Milkshake Bar, staff prep for hours before games to ensure enough food is ready to handle Suns fans. These restaurants get hit with massive waves of people prior to the game, and then their night goes on as usual once the game starts.

“During the Finals (in 2021), it was overwhelming because there were a lot of people who wanted to come in and eat,” said Xavier Cuevas, assistant general manager at Chipotle in Cityscape. “It got to the point where no one could sit down because all of the seats were taken. That only lasted for about an hour, and once the game started, it was dead silence.”

The newly opened Just Sports at First and Washington streets expects business to pick up once the season starts. The store, which sells team shirts and other gear, has been slow during its first two and a half weeks open, but manager Daniel Murillo is excited for what’s to come this season.

“If the Suns are winning, I’m pretty sure that we’re going to be getting a lot of fans around here. Once people know that we’re here, we will be fine,” said Murillo.

Murillo is hoping that people will consistently visit the store, especially when they have special drops of new jerseys the Suns will be wearing this year, along with other team items.

Elsewhere, at the Fanduel Sportsbook, located at the Footprint Center, fans consistently get turned away during a game because the venue is at capacity. Since the sportsbook is open for fans’ tickets and the general public, it becomes a place where patrons can feel like they are at the game. But it also is open on non-game days.

“Depending on what sporting events are going on each day, it varies. On NFL Sundays and college football Saturdays, we teeter around 100 patrons within the sportsbook,” said interim general manager Tim Marks. “On weeknights where a lot less is happening, we’re usually around 40-50 people.”

A second Fanduel Sportsbook is located inside the Annexus Lounge at the Footprint Center. Only fans with courtside seats are allowed to use this book. The books began opening over the past year after a state law allowing them to operate at sports venues was adopted.

“We’re expecting the proclivity of exposure to first-time bettors who are not familiar with the concept for sports gambling, which has only been legal in Arizona for a year,” said Marks.