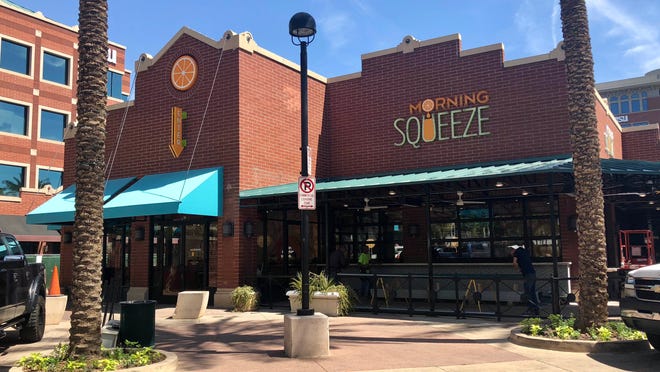 Downtown Phoenix restaurants and bars are opening soon. Where to go first

Downtown Phoenix is ​​growing and developing at a dizzying pace these days, with a plethora of new bars and restaurants popping up across the city.

The arts and entertainment district of Roosevelt Row on the northern edge of downtown continues to fill with new restaurants and bars, while the Phoenix Convention Center will soon have a new taproom.

Residents and visitors alike can look forward to alcoholic bowling, a whisper bar, and a French cafe, and can now enjoy some new and exciting coffee and brunch options.

Here are 12 new bars, restaurants, cafes, and coffee shops that have either recently opened or are about to appear in downtown Phoenix.

This upscale American restaurant is no stranger to downtown Phoenix, but it has found a new home. Anhelo was previously in a historic bungalow in Heritage Square. But faced with yet another summer with no air conditioning, the team decided it was time to move. The previous location closed in June and the restaurant in the Orpheum Lofts on Adams Street reopened in mid-September.

Popular Ingo’s Tasty Food restaurant in the Arcadia area now has a new location in downtown Phoenix. In the mornings, the new place works like a café that serves lunch and dinner later in the day. The menu includes a variety of salads, sandwiches, and burgers paired with craft cocktails, local beers, and wine. Find the new open and airy restaurant on Washington Street.

The FOUND: RE Phoenix Hotel and Match Market & Bar, Valley Coffee Co. is located on Portland Street next to Larder + The Delta and opened on September 18th. The coffee menu offers classic coffee options and a few sweet pastries. The real focus is on art. A 6 m high wall displays works of art by local artists from the valley.

The humble back entrance of an art collective in downtown Phoenix will soon reveal itself as a two-story agave wonderland. Barcoa, a Mexican-themed agave bar owned by festival producer David Tyda, opens this fall behind Xico Inc. Alley. Downstairs in the basement, customers should expect an agave-centric experience. The bar serves a variety of Mexican spirits and provides information on where each is made. Meanwhile, until Barcoa officially opens, Tyda runs an agave bottle shop in the back of the art gallery that sells bottles and small mezcal vials.

The imminent arrival of Ghost Donkey shows how much Phoenix is ​​growing and becoming part of the national food and drink scene. This trendy speakeasy style bar started out in New York City and now has locations in Denver and Las Vegas. Phoenix is ​​next on the list. Ghost Donkey will take over part of the building on Second Street that was previously under construction to become Punch Bowl Social.

Ghost Donkey is only part of the new room concept. A bowling alley and champagne bar called Châm Pang Lanes and another place called Palma share the building. Details of the opening dates are not yet known.

One of Arizona’s largest breweries opens a taproom and pub in the Phoenix Convention Center. Huss Brewing Co. began in Tempe and the downtown Phoenix location joins another location in Uptown Phoenix as the company’s third taproom. The Convention Center’s menu focuses on ingredients sourced from Arizona and, of course, local beer. The brewpub is slated to open at the end of October.

Gastronom Julian Wright has opened Pedal Haus’s first location in Tempe. Last year he added another in Chandler. Now it’s down to downtown Phoenix. The popular brewery sells award-winning beer and classic pub fare. The new Phoenix location will be located in the iconic white-painted MonOrchid building on Roosevelt Row and is slated to open in October.

Sottise Sound Room and Off The Record

Phoenix food fans may know Chef TJ Culp at Progress Restaurant in the Melrose District. But now he and his business partner Esther Noh are bringing their talents to downtown Phoenix. The duo bought the historic Knipe House on Second Street, built in 1909, and plan to convert it into two new concepts. The Sottise Sound Room, a French-style bistro, is located on the ground floor. Off The Record, an upscale cocktail bar, will move into the upper floor. Both locations are scheduled to open by the end of 2021.

Death in Dallas: One Family’s Experience in the Medicaid Gap