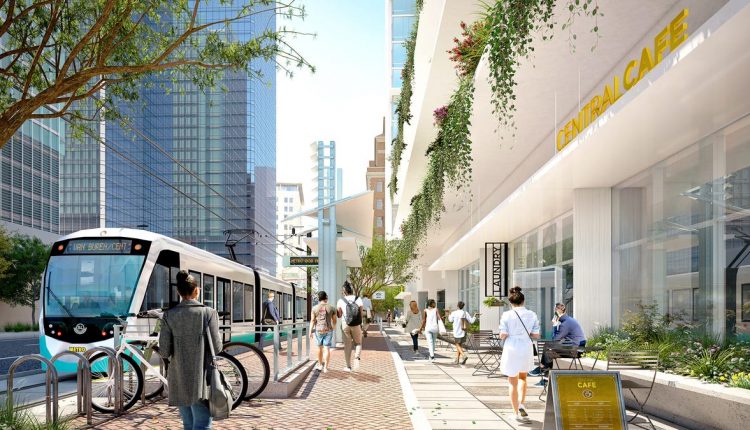 The Phoenix Central Station transit office was demolished late last year and work is underway on two high-rise towers that will bring apartments, student housing, offices and retail space, while continuing to serve as a hub for bus and light rail riders.

The 22- and 32-story towers on Central Avenue, between Van Buren and Polk streets, should open in 2024.

The taller tower will house a 360-unit, high-density apartment complex and the other will include a 240-unit student housing complex and 70,000 square feet of office space. Both towers will have ground-floor retail totaling about 30,000 square feet.

At a time when housing in metro Phoenix has become less affordable for many, 7% of the units in the apartment tower will be designated for workforce housing, according to Chris Mackay, Phoenix’s economic development director.

“It’s such an exciting project,” she said. “It’s not just going to be wall-to-wall buildings on one of our busiest intersections in downtown, but now you’ll be walking in the shade, you can grab a coffee or a sandwich when you get off the light rail.”

In the works for nearly a decade

The redevelopment of the downtown Phoenix transit depot has been a focus of the city for nearly a decade.

The site, which has two light rail stations and a bus depot, has been owned by the city since the 1990s, Mackay said. The city had tried to find a developer to reimagine the site around 2013 and released a request for proposals seeking plans from private developers to better use the site.

The city selected a proposal at the time, but the developer died and the city ‘pressed pause’ on the process, Mackay said.

“In 2014, we had to drag people kicking and screaming to respond to our RFPs,” she said.

Four years later, as the downtown area was seeing an influx of new development and private interest, the city sent out another request, soliciting proposals to develop the underutilized site.

Houston-based Medistar Corp. was selected as the developer based on a proposal they submitted, which called for apartments, student housing, office space and retail on the site. Plans originally also included a hotel, but that is no longer part of the project.

The site is adjacent to Civic Space Park, and Mackay said the project will enhance the park and bring more uses to the area. The development includes an outdoor staircase that creates an amphitheater-like space for events.

Bus, light rail must be included

“It’s an incredible rarity that a city has 2.6 acres in the heart of downtown that’s virtually empty,” Mackay said of the opportunity the site presents.

The city’s request required the developer to incorporate the bus and light rail service into the design of the project, so the site will still function as a transit station.

“They have to reintegrate the bus and transit,” Mackay said. “Really no other project has had to do that yet.”

Project will include restaurants

No retail tenants have been announced yet, but Mackay said there are several ongoing discussions with potential tenants. One request that has been on the top of the list for that area downtown: a good Mexican restaurant with a good margarita.

“People who came to visit for conferences or conventions used to always ask where they could take a picture of a saguaro, and now Arizona Center took care of that,” Mackay said. “Now the request I hear is they want a really good Mexican restaurant.”

The city remains the owner of the land, and the buildings will be on a 99-year lease, so once the lease is up the property will go back into the city’s ownership.

“Central Station is such a critical project,” Mackay said. “It reimagines transit, ridership and how people experience downtown Phoenix. Right now, when you get off the light rail you get off on concrete, but soon you will experience a beautiful redevelopment.”