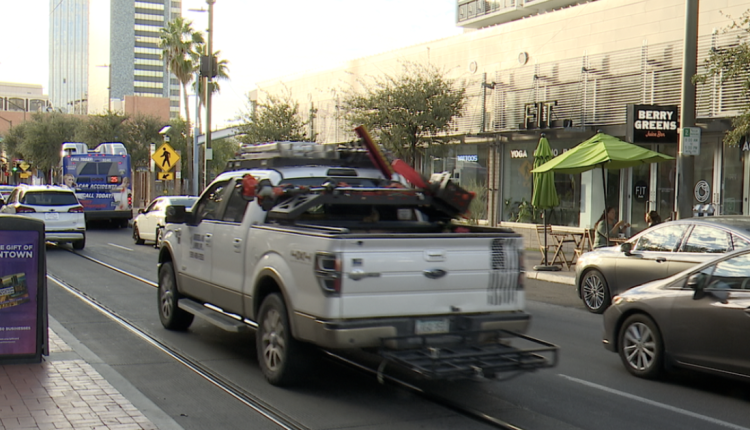 TUCSON, Ariz. (KGUN) — When you go to Downtown Tucson, there is no shortage of options when it comes to finding something to do.

So whether you’re going for your morning coffee at the Monica, or playing games at Cobra Arcade, or maybe just passing through and looking at the amazing downtown views, there’s something for everyone!

The Downtown Tucson Partnership is surveying people and asking them what they feel like needs to be improved about the downtown area.

The survey asks residents about why they go downtown and how often they go.

Evan Green is a Tucson resident who enjoys going to downtown for the food and enjoys the various restaurants.

However, he’s worried about the homeless population.

“Sometimes I run into some of them and they’re just like calling me names, being rude,” Green said.

The survey asks Tucsonans about safety issues they’re concerned about, one of them being the homeless population.

Ned Haan is a freshman at the University of Arizona who occasionally goes downtown and said he is also worried about the homeless.

“I still live right off Fourth Ave so I’m like pretty close to everything, and I don’t know. The first person I see when I walk outside most days is a homeless person, you know, that could definitely be something that could be improved upon,” Haan said.

The survey also asks for feedback on options for walking and riding bikes and Green said he’d like to see the streets repaired.

“I want to see the streets get better. The streets are kind of like concrete, so I can ride better and stuff on it, skate better,” he said.

As for transportation, the survey asks for feedback about how people get to downtown.

“I like that there’s a street car, so that’s great for public transportation,” Joanna Pope, who was visiting Tucson from Nebraska said.

However, Ray Flores, the owner of the Monica, a business in downtown, said transportation could be improved.

“A little bit more connectivity to the rest of the market so I think parking, transportation, easier parking access would be ideal to bring more people in from the other parts of Tucson and our outlying communities like Vail, Marana, etcetera, Oro Valley, Flores said.

Flores said even though downtown is vibrant and growing, he’d like to see more stores.

“Like a bowling alley, more arcades, something that’s more accessible,” he said.

However, whatever is in downtown’s future, people like Flores said it’s also important to focus on the present and the amenities that are already offered.

“Support downtown and all local businesses in Tucson,” Flores said.