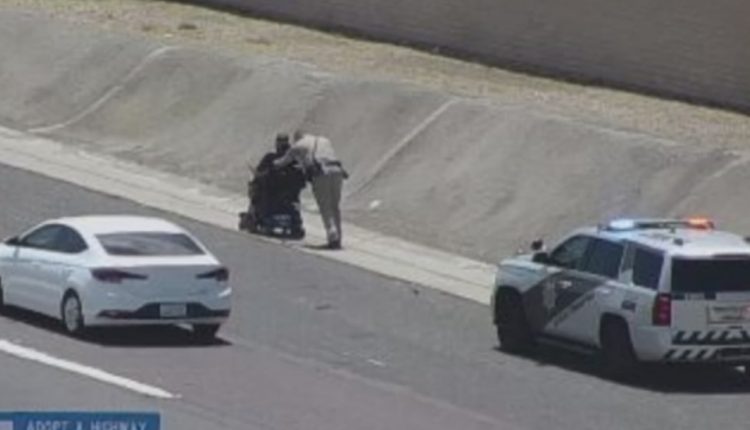 PHOENIX (3TV/CBS 5) — A witness called the Department of Public Safety Sunday after spotting a man in distress in over 100-degree weather. Trooper Lucas Adams responded and helped get the veteran who lived nearby to safety. “Being a police officer a lot of time you respond to people at their lowest,” said Trooper Adams. “We got a call of a gentleman that seemed to be in distress and stuck on the side of the freeway from a concerned citizen.”

He says he responded around 1 pm “He told me his battery had actually died because of the heat. He wasn’t able to get home,” he said. Trooper Adams says the veteran had been under the Arizona sun for several minutes, and instead of leaving the scooter behind, Adams began pushing it and making the trek to the man’s home nearly a quarter mile away. “It seemed like there was tension on the wheels and it made it difficult to push so I couldn’t really push him very fast and going up hill it made it a bit of a challenge,” he said.

The interaction was all caught on the ADOT cameras, but what you don’t see is the other good Samaritan Adams says stepped up to help. “To be able to jump in right next to a police officer and work shoulder to shoulder with me, it was encouraging to see him jump in with me. We’re both sweating and making sure this man made it home safely,” Adams said.

If the trooper wasn’t in the right place at the right time to rescue him, he worries about how long this man would have been in distress. That’s why he encourages the community to help their neighbors. “It felt good to pay it forward to a veteran. It doesn’t take long for someone to start feeling those effects of heat-related illnesses so it could have saved his life by that one citizen calling in reporting this to us,” Adams said.

The man is OK, and he’s now back at home with his family, thanks to Trooper Adams.