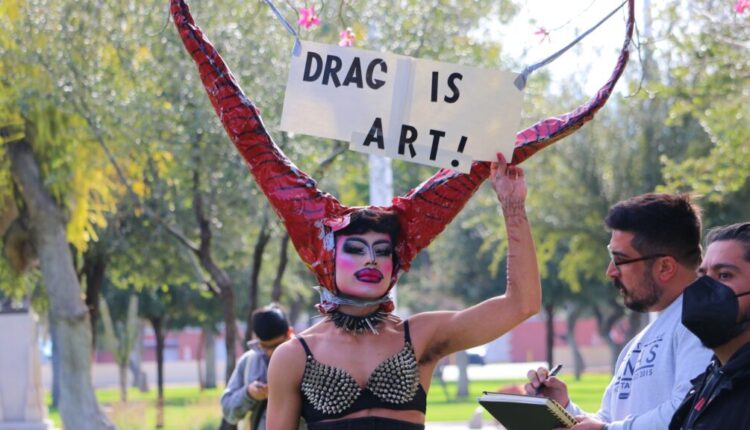 Rey spent more than six hours perfecting her look for a protest against anti-drag bills at the state Capitol on Sunday. The 18-year-old donned a cinched corset, bright red lipstick, white eye contacts and two tall hand-made horns — both of which curved around a sign that read, in capital letters: DRAG IS ART!

“I want to help people understand that drag is art,” she said. “I’m just expressing myself.”

That self-expression has recently been the target of conservative vitriol. Bills have been introduced in the state legislature that would categorize drag performances as equivalent to strip shows and penalize performances in schools and in public. One of the sponsors, Fountain Hills Republican Sen. John Kavanagh, framed the legislation as a way to protect children from confusing or overtly sexual shows. Another, Glendale Republican Rep. Anthony Kern, refused to discuss his bills, which would constrain where and when drag performances can take place, require permits, and criminalize those that violate the rules.

In response, local drag artist Noelle Cañez organized a march at the state Capitol to denounce the bills.

“We want everybody, not just the politicians, to know that we don’t think this is OK,” she said. “For somebody out in the public who’s never met a drag artist or has never been to a drag show, they might start to believe those hateful messages and take it out on us. We don’t know if we’re going to be discriminated against or have violence used against us as a result.”

That’s a fear that hits close to home for Xeno Danger, who lost two friends to the Club Q shooting in Colorado last year — a tragedy that has been linked to anti-LGBTQ policies and speech from the state’s public figures. After hearing about the anti-drag measures, and worrying about what the rhetoric could mean for Arizona’s LGBTQ community, he decided to join the protest, donning a neon green wig decorated with two miniature pride flags.

“It’s heartbreaking to see people twist the LGBTQ community into predators, when we’re just trying to have fun and stay safe,” he said.

Hundreds gathered on the lawn in front of the state House of Representatives on Sunday to voice their discontent with the legislature’s Republican majority, which has overseen the passage of several anti-LGBTQ laws in recent years. Last year, Arizona legislators joined a national movement of GOP anti-LGBTQ lawmaking to enact a ban on gender-affirming surgeries for minors and another law barring trans students from being on girls sports teams, among other anti-LGBTQ laws.

This year, along with the anti-drag bills, Republicans have also backed a measure that would prohibit teachers from using a student’s preferred name or pronouns, unless the name is consistent with their biological birth name and sex, or a parent has given written permission. And even then, a teacher could decide their opposition to accepting a child’s name and pronouns trumps the parent’s wishes.

A man holds up a sign questioning if religious uniforms fall under the same definition as the clothing drag performers wear in Phoenix during a protest of anti-drag bills on Jan. 22, 2023. The definitions included in the bills, which seek to target drag performers who often use clothing perceived as belonging to the opposite sex, have been criticized as being too broad. Photo by Gloria Rebecca Gomez | Arizona Mirror

Haley Feria, who uses “they” and “them” pronouns, criticized the state’s politicians for their repeated attacks against the community.

“This systemic abuse is getting old,” they said, speaking into a megaphone to a cheering crowd.

Republicans have championed parental rights, and Kavanagh’s bill addressing drag performances in schools has been defended as a protection of family values. That reasoning didn’t convince Lydia Burton, who slammed Republicans who seek to limit which communities she can expose her young daughter to as hypocrites.

“This is the party of parent’s rights,” she said. “If I want to take my kid to a drag brunch, if these are the values I want to instill, that’s my right.” 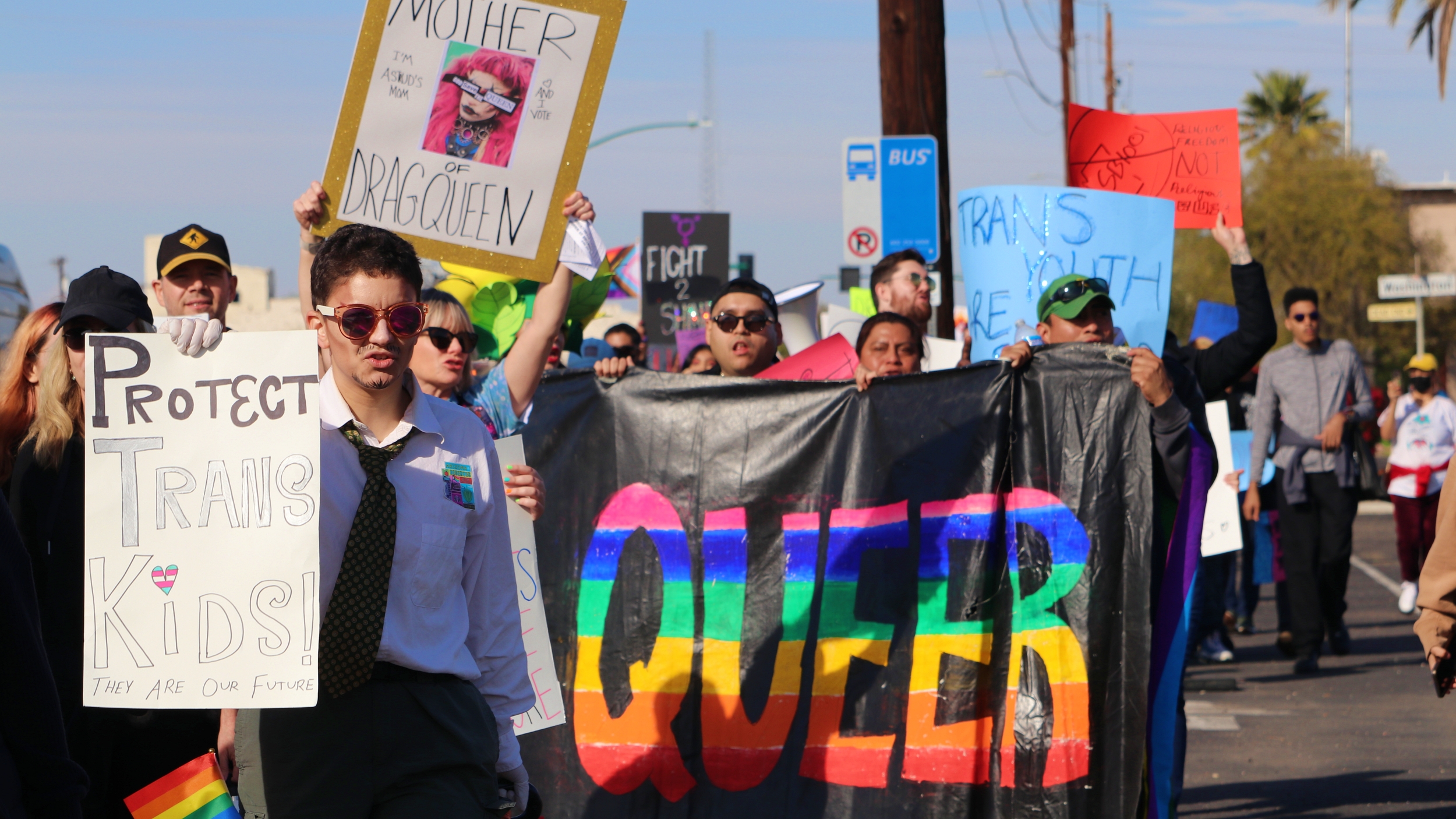 Protesters hold up signs calling for the support of trans and queer youth during a protest of anti-drag legislation in Phoenix on Jan. 22, 2023. Photo by Gloria Rebecca Gomez | Arizona Mirror

Cheryl Klein, 57, shared her concern that the state was edging closer to the hostility of the 1980s, which she lived through and vividly remembers.

Dawn Shim, the 17-year-old founder of Support Equality Arizona Schools, warned that anti-LGBTQ legislation threatens to increase suicide rates of trans and nonbinary kids across the state. A survey conducted by the Trevor Project, an organization focused on preventing suicide among LGBTQ youth, found that the recent spike in anti-LGBTQ laws and political rhetoric were among the reasons why LGBTQ youth contemplated suicide last year.

Despite assurances that Gov. Katie Hobbs will veto any discriminatory legislation, Shim said, just moving the bills through the statehouses is dangerous.

“When you’re passing these measures, you’re allowing kids like us to feel harmed — to want to kill ourselves,” she said, her voice quavering.

Xira Flores, a member of LGBTQ migrant advocacy group Trans Queer Pueblo, said the proposed laws are a modernized version of cross-dressing bans from decades ago, and said they were masquerading as religious freedom to erase trans and queer identities. Kavanagh’s pronoun bill has been sold as a protection for teachers who have moral or religious objections to preferred pronoun use.

Still, Flores said, the efforts from Republican lawmakers to legislate away the LGBTQ community would be unsuccessful.

“The language in these laws are trying to erase us, but they’ve had 500 years to make us disappear and we’re still here!” she said. “And we will continue to bring radical change and love and there is nothing, absolutely nothing, they can do to stop us,”

Bill Vantassell, 57, echoed that sentiment. Vantassel has been performing as a drag artist for more than 40 years, and he vowed to continue doing so. 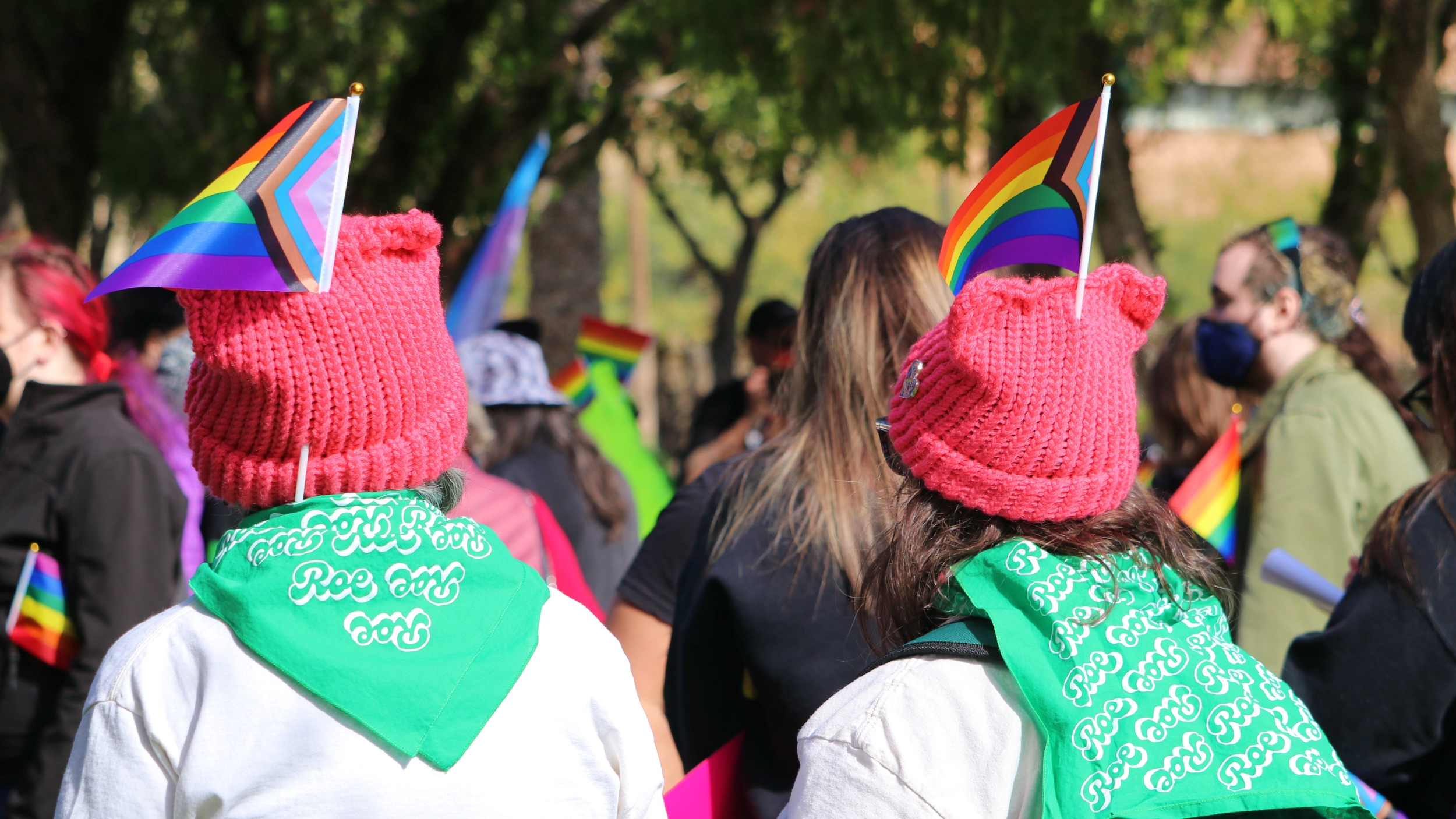 Two women show their support for abortion access and the LGBTQ community during a protest of anti-drag legislation at the state Capitol in Phoenix on Jan. 22, 2023. Photo by Gloria Rebecca Gomez | Arizona Mirror

After speeches drew to a close, Cañez, dressed in her drag persona Daddy Satan, directed the crowd in a group call to both Kavanagh’s and Kern’s offices, where they left a voicemail message yelling, “Arizona loves drag!” Then the group marched in a circuit around the statehouse buildings, waving to passing traffic and holding handmade posters high. Marchers enthusiastically chanted “Protect trans youth” and “Arizona loves drag, Arizona loves choice”.

Marie Calvano, 44, wore her pink knitted hat to the protest, in recognition of the 50th anniversary of Roe v. Wade. The event was co-hosted by Radical Women of Phoenix as a pushback against both the anti-drag bills and the state’s recent abortion bans after the U.S. Supreme Court struck down Roe. Calvano added a miniature pride flag to her hat, noting that she supported both the freedom of anyone to represent themselves how they’d prefer as well as unfettered access to reproductive healthcare.

“We’re all human, so why does another human feel like they have the right to suppress somebody else’s rights?” she asked.

Elizabeth, a protester who didn’t want to provide her last name, said she joined the march on behalf of women’s rights but added that she fully supported the rights of drag queens to perform. The state has enough problems, she said, that are being ignored while far-right Republicans attack an already marginalized group.