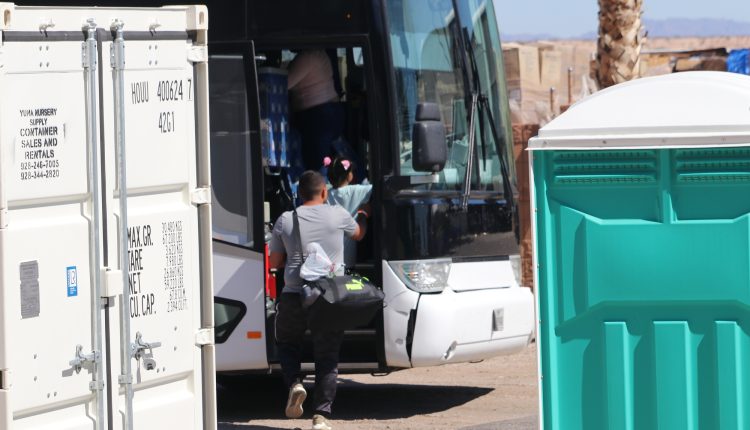 It’s 95 degrees in Somerton, a small town less than twenty minutes from the Arizona-Mexico border. On the town’s outskirts, migrants seeking asylum wait underneath a white tent to board a bus headed to Washington D.C.

Yuriko Raez wipes a hand over her face quickly while she digs through a backpack for a t-shirt to replace the one her toddler just threw up on. Raez didn’t expect to have to leave Peru, but when her husband, who worked a municipal job in their hometown, began receiving threats from extortionists, the family struck out for New York. After their multi-country journey, they were met with a week spent in holding on the border, and it’s draining to think about the days of travel still ahead of them.

Raez’s family joined the ranks of the 2,211 migrants who’ve been shuttled to the nation’s capital to date by Gov. Doug Ducey’s administration. The policy, which has been alternatively sold as a way to hit back at President Joe Biden’s alleged failure to secure the border — a prominent GOP talking point in the midterm elections — or humanitarian aid for migrants looking to settle further inland, has come under fire from local immigrant advocacy groups.

The coalition’s request came on the heels of Florida Gov. Ron DeSantis’ decision to send 50 migrants to Martha’s Vineyard with false promises of jobs on the east coast. In the letter, the coalition says it has received anecdotal reports of refugees who were sent to D.C. when they were hoping to make it to Texas or California, and stories of migrants who were told they could make better flight connections on the east coast than Phoenix.

“They just seem to be general allegations without any facts,” Karamargin said.

Punting the burden of proof to the FBI is a clear indication that there is no concrete evidence to be found, he added.

But Dianne Post, an attorney for the coalition who drafted the letter, said that involving the FBI is precisely the way to uncover evidence. Similar migrant transportation programs in Texas — which the Arizona one was modeled after — and Florida have been found to have misled migrants, and the coalition is concerned that Ducey’s program has done so as well. That concern was heightened by anecdotal stories provided by immigrant rights groups active on the border, but it’s difficult to trace the sources of the stories because migrants are constantly on the move. The FBI, however, has resources that local advocacy groups don’t, and if there’s something to be found, they’ll be the ones to do it, Post said.

“Once people are dispersed, it’s virtually impossible to get a hold of them,” she said. “That’s why we’re asking for an investigation, because we do not have all the facts. We have one organization’s word for it and Ducey’s word.”

They’re doing this for political reasons because they disagree with the party that’s in power right now, and I think that’s really disgusting, because you’re using vulnerable communities to do that.

The organization supporting Ducey’s bus policy is the Regional Center for Border Health, a Somerton-based non-profit that provides services for rural and medically underserved communities across the state. It operates 19 health clinics and a large part of its recent work has focused on COVID-19 vaccinations.

Shortly after the Uncage and Reunite Families Coalition held a press conference on Sept. 29 condemning Ducey’s migrant busing policy and demanding an investigation, the Regional Center for Border Health released a statement in support of the policy.

“This is a humanitarian effort, some of these families have no money to travel onward, Arizona is not their final destination. We would not be participating if this were in any way similar to what Texas or Florida Governors are doing,” said Amanda Aguirre, the center’s president.

In March, the center landed in the middle of a firestorm for dropping off migrants at Sky Harbor unprepared to travel. The process has been streamlined since then, and in May, the center partnered with the Ducey administration and the Arizona Department of Emergency Military Affairs, which oversees the bus program, to transport migrants seeking asylum to Washington, D.C.

Ducey’s program is different, Aguirre said, because it provides transportation for migrants with destinations on the east coast who can’t afford to pay for their own travel.

Karamargin agreed, saying critics should be thanking the governor for his help.

“Because we are taking (migrants) closer to where they ultimately want to be, these organizations should be thanking us, not criticizing us,” he said.

A choice or coercion?

Every Monday and Thursday, a bus arrives at the Regional Center for Border Health’s administrative building in Somerton to pick up 30 to 40 migrants and make the roughly two-day trip to the east coast. Migrants fill out an acknowledgement form in Spanish that affirms they are voluntarily being taken to Washington, D.C., with no coordinated layovers elsewhere.

Once in the nation’s capital, migrants are welcomed by their sponsors or are connected to immigrant advocacy nonprofits there to arrange travel to their intended destination — the one they notified Customs and Border Patrol officials they were headed to and the one they’re supposed to check in with to avoid a deportation order.

Most migrants aren’t aiming for D.C.; it’s just a stopover to get closer to their final destination. According to statistics from Ducey’s office, approximately 29% of the migrants were hoping to get to New York, and 18% were headed to Florida.

On Oct. 10, four-year-old Esteban Bolivar’s eyes were glued to his dad’s phone, his thumbs moving wildly over the game’s animations, oblivious to his father’s nervous pacing nearby. Sebastian and his wife, Natalia, both 26, waited in the stifling heat for permission to board the bus to Washington D.C. The trio traveled from Bogotá, Colombia, to meet friends in Ohio, nearly 8 hours away from Washington, D.C. But for Sebastian, the long wait times are an investment.

“I came because I want to give my son a more prosperous future,” he said.

Four-year-old Esteban Bolivar looks up briefly from playing on his dad’s phone while waiting to board a bus to Washington D.C., on Oct. 10, 2022, in Somerton, Ariz. The Bolivar family, from Bogota, Colombia, is headed to Ohio to stay with friends. Photo by Gloria Rebecca Gomez | Arizona Mirror

The source of the allegations that migrants are being misled about their trips to D.C. is Fernie Quiroz, director of the AZ-CA Humanitarian Coalition, which assists migrants with access to health care, food and transportation.

Often, migrants hoping to board the bus spend a night or two in a hotel, waiting for the next scheduled pickup, courtesy of the Regional Center for Border Health. In the past, Quiroz has helped take meals to many of these migrants when they can’t afford to purchase their own food. That’s where, Quiroz said, he spoke to several migrants who told him they were aiming for destinations far away from Washington, D.C., such as Las Vegas, but felt they had no choice but to board the bus.

Some shared they were told that D.C. has welcoming shelters, and two airports from which it’s easier to catch a flight than in Yuma or Phoenix. Relatives have also reached out to Quiroz, confused about why their family members have ended up several states away from their intended destinations.

“I’ve had family members call and say, ‘What is my mother doing in D.C. if she’s supposed to go to Houston?’” he said.

As to why he isn’t able to provide specifics, Quiroz said it’s not his job to keep track of those cases or compile evidence against the program. His job, he said firmly, is to assist migrants at the border, not direct investigations.

Abel Nunez, executive director of the Central American Resource Center (CARACEN) in Washington, D.C., hasn’t seen any evidence that migrants arriving in the nation’s capital from Arizona are being actively misled, though he acknowledged there have been some cases where migrants arrived on the east coast when their final destinations were much further away. In those instances, CARACEN simply secured their travel to their actual destinations and notified the Regional Center for Border Health to help identify issues in their intake system.

The Arizona program is better developed than the Texas or Florida programs, Nunez said, but they’re all still using migrants as props in a bid to score political points.

“They’re doing this for political reasons because they disagree with the party that’s in power right now, and I think that’s really disgusting, because you’re using vulnerable communities to do that,” he said.

Truly helpful transitional assistance for migrants helps them get where they’re supposed to be as soon as possible, Nunez said. Before being released by Border Patrol agents, migrants are given a notice to appear, which designates a court date, or given a parole window of 60 days to present themselves to an immigration office to receive a notice to appear. But travel times and logistical concerns can cut into that critical period.

“They have 60 days, but they are already losing three or four days just in the trip to D.C. If they still need to go somewhere else, depending on how far they’re going — off the bat they already lost like a week, and they’re still trying to get jobs and housing,” he said.

Nunez doubts migrants have been intentionally coerced or misinformed about the bus program in Arizona, but he questions whether they really have a choice.

“My experience has been that neither the government officials nor the non-governmental organizations are lying to the people,” Nunez said. “I think the better question may be: Is it voluntary when you have no other option?”

Quiroz is skeptical about continued insistence from proponents of the busing that it provides humanitarian aid for migrants where nonprofits aren’t able to. Helping migrants, Quiroz said, would be better served by coordinating transportation to their actual destinations, not introducing new complications into their journeys.

“If the governor truly wanted to say he assists migrants, why aren’t we busing the asylum seekers to where they’re really going?” he asked. 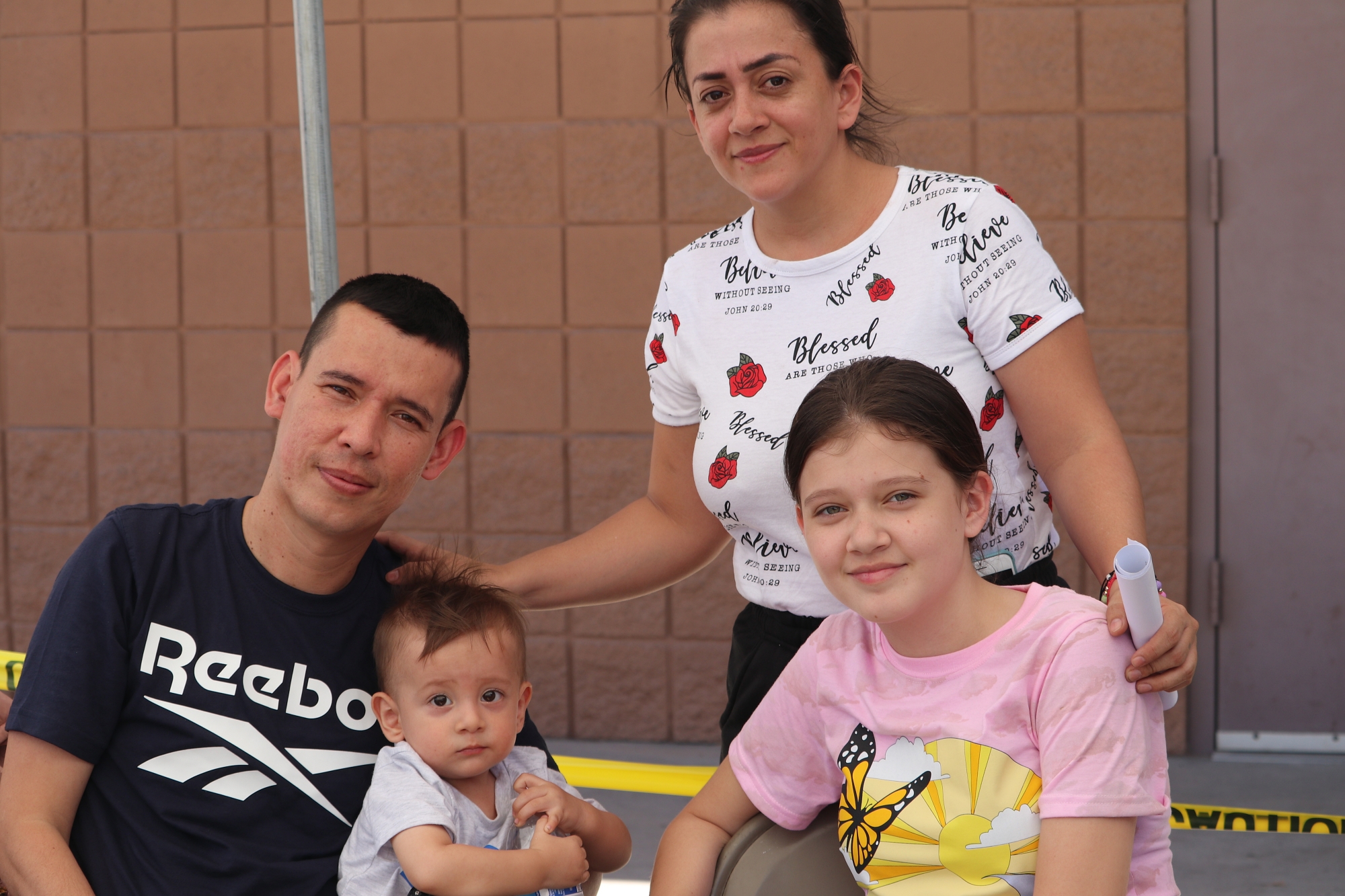 The Luna family poses for a photo while they wait to board a bus to Washington, D.C., on Oct. 10, 2022, in Somerton, Ariz. The Colombian natives are aiming to start a new life in South Carolina. Photo by Gloria Rebecca Gomez | Arizona Mirror

Ramiro Alfonso Luna and Cindy Hernandez moved their young family of four from Colombia to the U.S. to escape the violence erupting around them.

“We’re displaced,” Luna said. “In our country, we are constantly in danger. We decided to leave to protect the lives of our children. We don’t want them to suffer the consequences of conflicts we have no stake in — or end up orphans.”

The pair have friends in South Carolina, but no way to reach them without taking advantage of the free bus ride to Washington, D.C. Plane tickets are nearly $2,000 from Phoenix, even with 13-month-old Santiago sitting on his mom’s lap.

“That much money – from where?” lamented Hernandez, raising her hands helplessly.

Ducey has said the policy of busing migrants to Washington, D.C., will continue through to the end of his term. With each bus costing the state approximately $82,164, the total cost has reached over $5 million.

Both candidates running for Arizona governor have stated they plan to stop the policy if they are elected to office, with Republican gubernatorial candidate Kari Lake equating it to human smuggling.