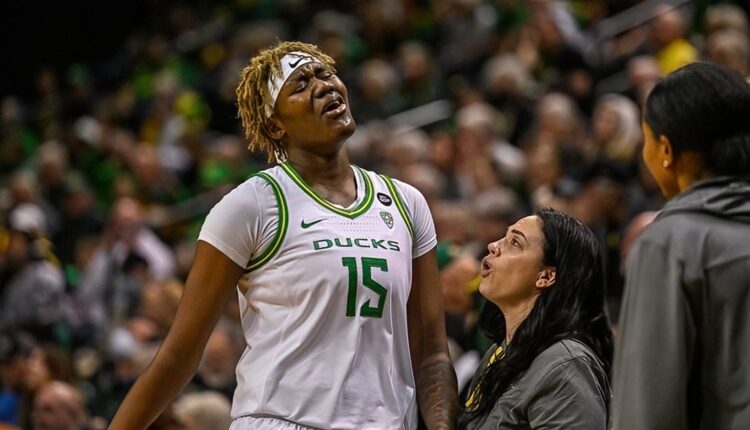 TEMPE, Ariz. — Another opportunity for a resume-building win was lost in the final minutes, as the Ducks couldn’t pull off a road win over the 15th-ranked Arizona Wildcats.

The game changed advantages like a seesaw with 21 lead changes, nine total ties, and neither team ever holding a double-digit lead. Ultimately, Arizona did more when it mattered most, winning the final two minutes to hold on for a 79-71 victory before a packed crowd at the McKale Center.

The loss drops the Ducks (12-4) to 3-2 in Pac-12 play and acts as their fourth this season against a top-15 ranked opponent. The other three losses this season came to North Carolina, Ohio State and UCLA with games against the Tar Heels and Bruins also lost in the closing minutes.

Arizona broke a gridlock in the final two minutes with consecutive baskets by Jade Loville and Cate Reese to pull ahead by four. Grace VanSlooten, who scored a game-high 18 points, cut it to two points, but the Wildcats earned the win with six made foul shots over the final 23 seconds.

The Wildcats forced a season-high 20 Oregon turnovers. Those giveaways led to 16 Arizona points and changed the tenor of a game where the Ducks shot 52.7 percent from the field, but failed to come up victorious.

Arizona was able to gain the edge in part because of an uncharacteristic day from three. They knocked in 10-of-20 from deep. That percentage is far above their season average of 36.7 percent. They also tied the Ducks on the glass at 33 a piece. Arizona entered as one of the league’s worst rebounding teams.

VanSlooten scored 18 point on 8-of-13 shooting while Endyia Rogers and Te-Hina Paopao added 17 each. Chance Gray scored 10, while Philli Kyei added six points and 10 rebounds in the defeat.

Oregon will now host Washington next on Friday at 7 PM.