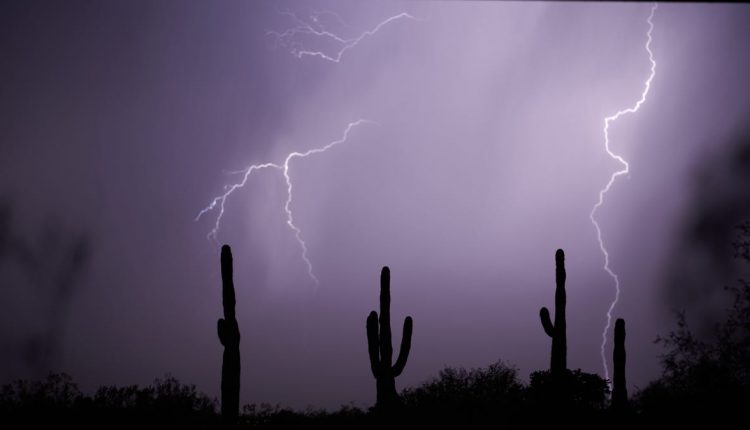 The National Weather Service in Phoenix issued a dust storm warning just before 8 pm Sunday in Maricopa and Pinal counties after a weekend of thunderstorms, hail, rain, and flooding.

At 7:52 pm, a wall of dust extending from Blackwater to Casa Grande to Arizola to Chui-Chu, moved west at 25 mph, according to NWS.

Hail and strong winds were seen across Arizona as storms progressed through the state on Saturday. This week’s forecast includes more showers and high temperatures for most of the state.

In Phoenix, the thunderstorms brought wind gusts with speeds ranging between 50 and 60 mph on Saturday, according to Sean Benedict, a meteorologist at the National Weather Service office in Phoenix. At the Phoenix Sky Harbor Airport gusts of 61 mph were recorded.

A heat burst event occurred at the airport due to winds since these pushed the dry air toward the surface and temperatures rose almost ten degrees, according to the weather service.

There were some showers in Phoenix although most of the rainfall was seen in places including the Superstition Mountains, McDowell Mountain Regional Park, Sun City and Buckeye.

Lightning was also seen across the region progressing from the White Mountains area until the Colorado River over the course of 12 hours. According to the weather service, there were almost 25,000 flashes.

“We don’t typically keep track of what’s normal for an event like this, so I can’t say whether or not (25,000 flashes) were normal or not,” Benedict said. “But the storms yesterday were definitely a little bit stronger than what we typically see.”

The progression of the storm was a result of the change of wind conditions, according to Benedict.

Plenty of lightning across AZ yesterday. In this graphic, showing lightning flashes from ENTLN, you can pick out the track of the main clustering of storms that originated near the White Mountains and progressed all the way to the Colorado River over the course of ~12 hrs. #azwx pic.twitter.com/0tv2f0id2d

In southern Arizona, most of the thunderstorms on Saturday were severe, according to Aaron Hardin, forecaster at the weather service office in Tucson. There were storms from Rio Rico, up to Green Valley, Tucson and Mammoth, and to the west toward Three Points.

The strong winds left some uprooted trees, and one roof was blown off, according to Hardin. There were also reports of hail, and the biggest one reported was about 1.5 inches in diameter, which is close to the size of a ping pong ball.

“That big doesn’t happen very often,” Hardin said. “We just had the right ingredients in the atmosphere for that to happen. Typically, we’ll get, like, pea-sized hail storm during the monsoon, but we just had the right conditions yesterday to give us bigger hail.”

In northern Arizona, the heavy rains have resulted in flash flooding that has damaged structures and forced temporary road closures. This week, anywhere from 30 to 60 members of the National Guard will be in the area to assist with flood mitigation in the the Schultz/Pipeline flood area.

No floods were reported on Saturday, according to Jeremy Mazon, meteorologist at the National Weather Service office in Flagstaff. There were some scattered storms, especially along the Mogollon Rim and toward the Flagstaff area.

While the precipitation rates haven’t been out of the ordinary, Mazon said the challenge is when they happen over wildfire burn scars since it increases the chances of flash flooding.

“So if anything, that that’s been our primary concern with these storms is just the location, which is it can be difficult to try to predict exactly where those storms will form,” Mazon said.

In central Arizona there were chances of thunderstorms in high terrains on Sunday and overnight a cluster of showers and some storms were expected to develop west of Phoenix, according to Benedict.

Monsoonal moisture will be in the area this week, bringing chances of showers and thunderstorms, especially in high elevation areas.

In Phoenix, high temperatures are expected to drop a little bit to 110 degrees or below.

“So still hot, but not as hot. It’s just that time of the year, we’re at the number at the peak of our heat season. So regardless, we should still be taking out all the precautions necessary,” Benedict said.

In northern Arizona, scattered showers are expected almost every afternoon this week, according to Mazon.

In this region, temperatures are expected to climb to the upper 80s throughout the week, which is above average for this time of the year, according to Mazon. There is an excessive heat warning for the lower parts of the Grand Canyon and Marble Canyon through the middle of the week as temperatures can reach up to 114 degrees.

“So not only do we have the threat of a thunderstorm … but we also are watching out and communicating to everyone that temperatures are going to be well above normal and it could become dangerous if people are recreating in the afternoon and not properly hydrating and taking care of themselves,” Mazon said.