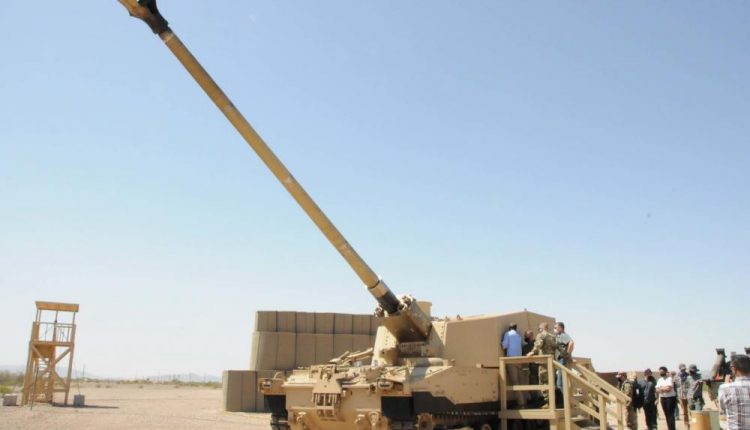 The Extended Range Cannon Artillery (ERCA) weapon system has shown that it can do the job. In previous tests and demonstrations, the ERCA has fired twice as far as any currently deployed army cannon and has proven that pre-loaded cartridges from a limited capacity autoloader magazine are 2-3 times as fast as a gun crew. The speed of the autoloader was again demonstrated in a test on March 30th at the Yuma Proving Ground (YPG).

The autoloader, designed by the Armaments Center of the Army Futures Command (AFC) in the Picatinny Arsenal, mechanically performs the tasks of loading cannons – setting the fuse, loading the projectile, propellant and stabbing charge, closing the breech – one after the other, whereby the barrel points to allow the cannons to be fired at unprecedented rates.

Army Future’s Command Brig. Gen. John Rafferty, Director of the Cross Functional Team (CFT) for Long Range Precision Fire (LRPF), traveled to YPG to see the demonstration firsthand and to meet the team behind all of the work.

He told the team, “The army is watching what you do and they are impressed.”

The demonstration included the armaments center’s 31-round autoloader at full capacity and various types of loads. The aim was to obtain data on increasing the rate of fire in ERCA and to check the technical maturity of the large autoloader system. Sub-components: projectile magazine, propellant magazine and transfer mechanism.
Rafferty explained: “We know that at some point we have to improve the rate of fire of the system in order to cause lethal consequences for our opponents in the volume we need, but also to increase the survivability of our soldiers and our system. They can shoot and move fast – because once we bring an ERCA battalion into play, they become the primary target of the enemy because the ability it offers is so significant. ”

Chris Smith, head of the Armaments Center’s Cannon Integrated Product Team, whose team is responsible for the performance of the cannons, added, “If you manually load artillery, they can do it quickly at first, but then they get tired and slow. This automated process will help maintain this rate by taking the user out and also keeping it safe. ”

After Rafferty, together with the YPG and YTC leadership and the ERCA teams, looked at the inner workings of the weapon system, they watched the live firing of three inert rounds from explosion-proof work areas at the weapon position. There was little time between each round and the work was “seamless,” said Smith. “Today was very successful. Today’s demonstration was the result of a lot of hard work by the arms center and industry partners to put together and demonstrate an autoloader for ERCA meets the requirements set a few years ago, ”said Anthony Sebasto, Senior Executive Service of the Armaments Center’s Executive Director for Enterprise and Systems Integration Centers.

Rafferty told the crews on site, “With what we saw today, I don’t know how you can’t be impressed.”

Now the data collected from this demonstration will be reviewed, analyzed and applied to the system.

“Today we demonstrated the rate of fire. This gave the army another data point to build confidence in the capabilities and capabilities of ERCA ammunition handling for the future, ”said Sebasto.

Rafferty stated, “We’ll get range and lethality first, and then when we’re ready, increase the rate of fire.”

Soon what was learned during this demonstration will be put back into practice at higher stakes.

“We are on the right path. The combination of propellant magazine, projectile magazine and transmission mechanism is really magical to see in action. It’s an early effort that will mature into a 23-lap system that will be demonstrated later this year, ”Rafferty said.

This work, The speed of the ERCA autoloader was tested at the Yuma Proving Ground, by Ana Henderson, identified by DVIDSmust comply with the restrictions stated on https://www.dvidshub.net/about/copyright.

Susan Page On Pelosi, Trump and the Washington Establishment: 1A: NPR