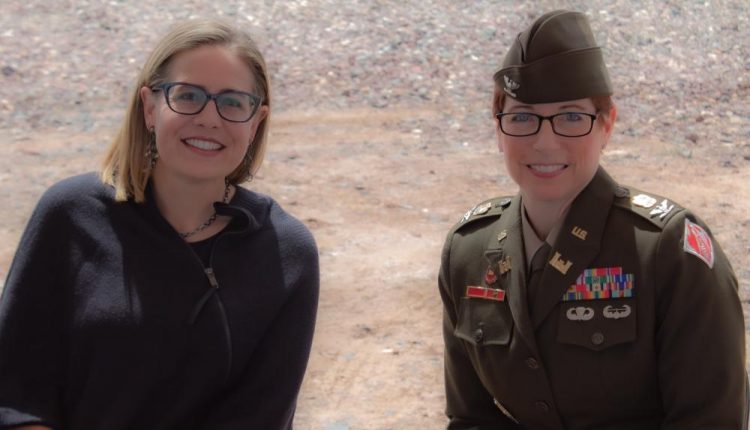 WINSLOW, Ariz. – The Little Colorado River at Winslow Flood-Control project is slated to receive more than $65 million in federal funding this year, said Sen. Krysten Sinema, during a panel presentation April 11 in Winslow.

The additional funding – announced by the US Army in January – is being received through the bipartisan Infrastructure and Investment Jobs Act, or IIJA. This will provide full funding for the project to complete both its design and construction.

During the event, US Army Corps of Engineers Los Angeles District Commander Col. Julie Balten, Winslow City Mayor Roberta “Birdie” Cano and leaders with Navajo County discussed details about the levee reconstruction project and its positive impact on the area, including the removal of an invasive plant species.

“Currently, about 5,000 people – families who live, work and call this area their home – along with critical infrastructure, including hospitals, schools, nursing homes and utilities, are located within a flood plain and are at the potential risk of flooding.” Balten said.

The project area includes about 4.3 miles of flood-risk reduction levees and improvements, located along the Little Colorado River near Winslow.

“The completion of this project will be a win for this community – not only by reducing the potential flood risk associated with the river, but also by creating stability, economic vitality and future growth for the area,” Balten said.

The project also will have a positive environmental impact by removing Tamarisk, or salt cedar, an invasive plant species.

“The plant leeches out to rich, nutrient soils and waters, then deposits salt, so that the native plants aren’t able to compete because of the amount of salt deposited into the soil,” said Arizona State Park Ranger Kenn Evans II.

Dense thickets of salt cedar infest the banks and riverbed of the Little Colorado River. The US Department of Agriculture’s Forest Service categories the plant as an “invasive weed” from Eurasia, which can disrupt and replace native plants, degrade native wildlife habitats, drain limited areas of moisture and increase wildfires.

“The plant, as it spreads out also catches a lot of fine sediment, which reduces the carrying capacity of the Little Colorado River water flow,” Evans said as he pointed to the riverbank. “Through this decrease in river water-carrying capacity downstream, it increases the risk of flooding in the area.”

Typically, Corps’ projects are funded for design and then for construction. With the additional monies being received from the IIJA, the Little Colorado River at Winslow Flood-Control project was funded for both the design and construction at one time in fiscal year 2022.

“We are planning to have the design agreement signed with Navajo County by the end of the year,” said Priyanka Wadhawan, LA District project manager.

For more information on the invasive impact of salt cedar, visit www.fs.usda.gov

this work, Winslow Flood Control Project to receive $65Mby Robert DeDeauxidentified by DVIDSmust comply with the restrictions shown on https://www.dvidshub.net/about/copyright.

Inflation causes high egg prices in the US, not in Tucson

Families plead for answers after 2 men found shot to death in Phoenix, no arrests