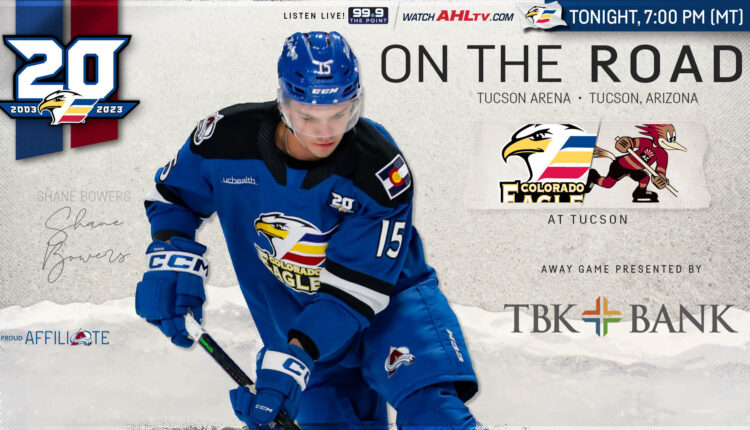 Eagles will close out their 5-game road trip against Roadrunners tonight, at 7:00 pm MST at the Tucson Arena, AZ.

Last night, Colorado forward Cal Burke netted a shorthanded goal early in the first period, while fellow forward Oskar Olausson buried the game-winner late in the third to give the Eagles a 2-1 win over the Tucson Roadrunners. The victory also brings to an end a season-long, three-game losing streak for Colorado. Goaltender Justus Annunen earned his 10th win of the season, turning aside 23 of the 24 shots he faced.

The Avalanche recently recalled forwards Charles Hudon and Martin Kaut as well as goaltender Jonas Johansson from the Eagles.

The Avalanche recently reassigned forward Jean-Luc Foudy to the Eagles.

The Avalanche Recently recalled defenseman Brad Hunt from the Eagles.

The Eagles are sitting at a 19-11-2-0 record this season. Colorado is currently ranked 4th in the Pacific Division.

The Roadrunners have a 14-13-4-0 record this season. Tucson is currently ranked 5th in the Pacific Division.

Former Eagles forward Travis Barron now plays for the Tucson Roadrunners. He spent four seasons with the Colorado Eagles and won the ECHL Kelly Cup with Colorado in their final season before moving to the AHL.