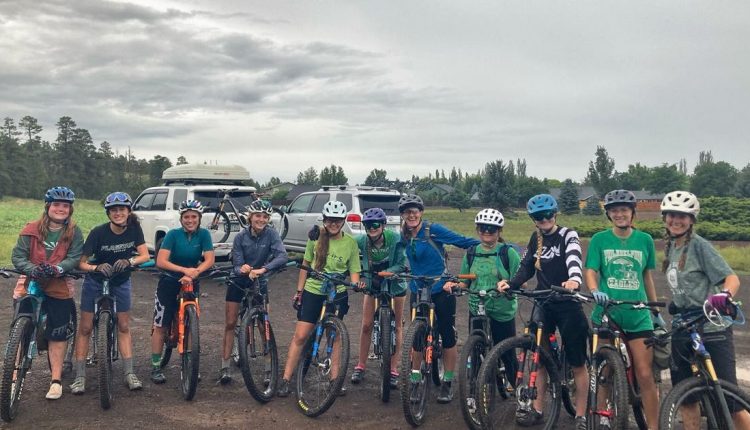 Being a mountain biker on Coach John Urkuski’s team is fun. The members are motivating and the atmosphere is light. It’s part of what makes the Eagles so successful.

If there’s one thing talking with the fourth-year head coach will tell you, it’s that the Flagstaff Eagles mountain biking team has a blast day in and day out.

During its three-days-per-week practices, the team often plays a game called “Footdown.” Bikers line up in a circle and begin pedaling clockwise. Anyone who lifts their foot off the pedal and onto the dirt is out. The cycling gets faster and the circle gets smaller. The last person to keep their foot off the ground wins the game. It’s an activity that teaches balance while pedaling in tight spaces.

The game is just one example of how the team keeps things light. The group works on skills and practice with high intensity, but they never stray away from the fun, upbeat atmosphere that athletics are supposed to have.

The team is successful, too. Last fall, the Eagles earned their first ever state championship trophy while going undefeated in the season’s races. This year, the team has a record of 42 members.

Both the large size of the team and its success can be equated to Urkuski’s relaxed style of coaching. He doesn’t place expectations on members, as he’d rather them go out to practice everyday and simply have fun.

“I just want them to come out and do the best they can in every practice,” he said. “They keep it fun and give it their all.”

Each day, the team works on skills such as uphill inclines or downhill coasting for about 30-45 minutes. Then, the rest of the practice is for cooldown, games, and working on individual skills.

There’s plenty of aspects of the team that stand out. For one thing, the team’s staff is made up of about 12 regular coaches, meaning there is plenty of coaching available for each athlete.

Secondly, Urkuski says that 28% of the roster is female.

“The league average is around 20%,” Urkuski said. “So we’re really excited about being above the average.”

Urkuski said he and the coaches purposely try to recruit female athletes by employing female coaches and reaching out to students during the offseason. Urkuski says the effort is a push for inclusivity and diversity.

The team doesn’t have tryouts and accepts anyone, regardless of skill level or experience. They can even join and practice if they don’t want to race.

If students have conflicts that interfere with either a practice or a race, Urkuski doesn’t mind.

“We don’t stress about it. Most of these kids are out riding on the weekends where they get their time on the bike anyways, so we don’t put a lot of pressure on it,” Urkuski said.

During the offseason, Urkuski encourages riders to actually lay down their bikes for a while and focus on something else.

“Hiking, snowboarding, cross country skiing or hitting baseballs at a batting cage. Just mix it up,” he said.

The team started practice back in early July for the upcoming season. The team’s first meet takes place on Sept. 10 at Fort Tuthill, with 79 high schools planning to attend the event. The season will consist of five meets across the fall.

Goals are not so tangible for the team, looking for specific results. He doesn’t expect a repeat of last year’s State Championship, and he doesn’t want his riders to expect a trophy out of themselves. He just wants riders to put in effort at every practice and to stay positive.

Being a rider himself for over 20 years, Urkuski understands what biking means to him, and therefore has inspiration to coach.

“One thing about biking and cycling in general is that it’s something they can do for a lifetime.” Urkuski said.

This season, the team is planning to donate 10% of the money it raises to the SiiHasin Bike Program located in Indian Wells. Urkuski also has his sights set on winning the league’s annual raffle, which would earn the team a customizable Strike Visuals tent. Fittingly, if the team wins, Urkuski would give the tent to the SiiHasin program.

Last year, Urkuski donated more than $400 to SiiHasin, which helped fund a trip to Sierra Vista for the State Championship race.

As the season quickly approaches, Urkuski looks forward to another season under the helm of the team. He believes in biking being more than just a sport.

“It’s about building community and building relationships,” he said. “If there’s one thing I’m really proud of it’s that these kids have made friends all over the state.”

“It takes a village — the kids, the coaches, the parents — I can’t do it without them,” he added. “Everybody has really come together to support this team and it’s been amazing the last couple of years.”

Effectiveness of Yuma shipping containers Yuma remains to be seen