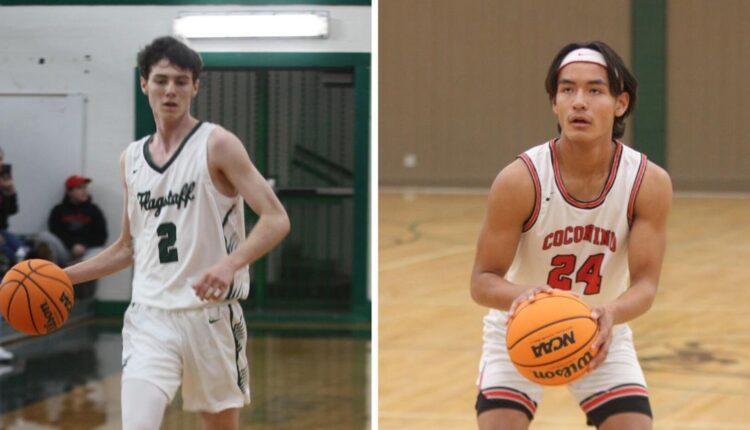 Both Flagstaff and Coconino boys basketball started play with wins in the Pepsi Holiday Invitational Thursday at Flagstaff High School.

The Panthers and Eagles started the three-day tournament, which began with pool play on Thursday morning and afternoon, with wins that ensured spots in the tournament bracket on Friday.

As an exhibition tournament, the event does not count for standings or playoffs at the end of the season. But, with several games over three days, it is a chance to try new ideas and get plenty of time on the court early in the schedule before the meat of the regular season comes in January.

“These tournaments are fantastic for us because our strength of schedule is pretty insane, and we like it that way because it tests us. But to be consistently tested this way is a challenge for our team to try to be the best we can. We’ve been shown there’s a lot to work on,” Coconino coach Cooper Elliott said.

Flagstaff is taking a similar approach.

“I’d love to get better in our depth. We’ve still got guys that are new to the team and new to the sport. So we obviously, in our home tournament, we want to win the thing, but we want to be able to develop more heading into region play,” coach Nick Walton said.

Both teams, with wins, solidified at least one more playoff game in bracket play come Friday.

The Eagles topped the Bulldogs in a back-and-forth contest that came down to the final minutes.

Junior Connor O’Brien-Piubeni hit an and-one layup with a 1:01 left to play to take a 66-61 lead and put the game away. He finished with 26 points, 17 in the second half, including nine in the fourth quarter.

O’Brien-Piubeni’s effort was bolstered by 28 points from junior Jake Centner. Centner scored 19 of his points in the first quarter. He still made several plays the rest of the game, but was a bit more of a distributor as Winslow tried to key in on him defensively.

“Once that pressure started coming to Jake, I started getting my looks,” O’Brien-Piubeni said. “They started falling and I was excited. They were backing up off of me, so I started pulling it.”

The Eagles led most of the second half, but Winslow came back and took a 54-52 lead with 6:06 remaining in the game.

Flagstaff senior Ben Janecek hit a 3-pointer to retake the advantage, 56-54, and the Eagles held on from there.

The win, less than a full day removed from a home loss to Cactus Shadows, was rewarding.

“These guys have been battling the last few days and some tough losses. It feels good to get the confidence back,” Walton said.

“We really want to go to the championship of the tournament and protect our home court. We lost last night and that sucked, but we’re looking to come back and play well,” O’Brien-Piubeni added.

Coconino started the day with a strong effort against crosstown foe Northland Prep, racing to a comfortable victory.

Spartans sophomore Colton Andersen led the scoring with 19, but the Panthers’ defense and transition offense were too much for Northland Prep to contend with.

Panthers and Spartans trade late buckets to end the half, and Coconino leads 47-22 at the break pic.twitter.com/gf0Z8J6YOr

Coconino led from the jump, sprinting out to a 47-22 lead at halftime. The Panthers continued to put the pressure on, starting the third quarter with a 15-2 run that pretty much sealed the victory. The mercy rule running clock ended the game in the fourth quarter.

The effort from the Panthers, Elliott said, was impressive following a loss at Peoria on Wednesday night.

“I do think the fact that we played three games in the past 24 hours has an effect on everyone. But the heart that some guys played with today was honorable,” he said.

The next game did not go the Panthers’ way, as the Valley Christian Trojans took it to them.

Valley Christian’s defense was as tough as any the Panthers have seen this year, holding Coconino to just seven points in the first quarter. The Panthers could only muster five more in the second, and the Trojans led 47-12 at halftime.

As the Trojans were forcing the Panthers into turnovers and difficult shots, they scored in transition and were solid in shooting from 3-point range.

They kept up the pressure in the second half, as both teams knew the eventual outcome and withheld most of their starters in the final minutes.

“We’ve played a couple good teams in the last couple days, and I think we kind of got exposed on the defensive end with the speed and offensive capability of these teams we were playing,” Elliott said.

Coconino, Flagstaff and Northland Prep will all play Friday, against teams to be determined by the results of the tournament’s other contests.