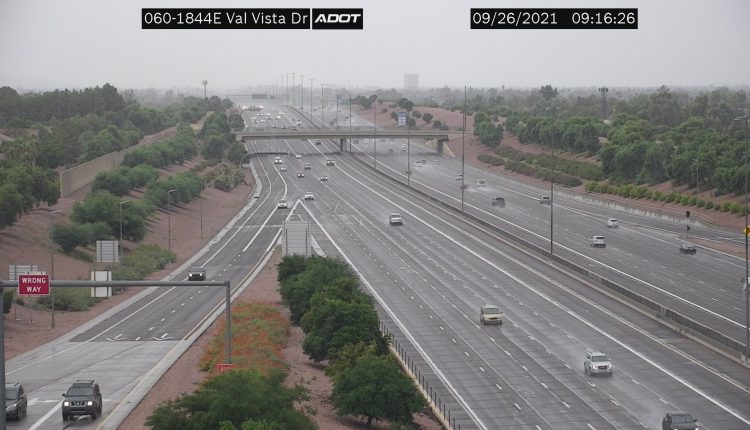 PHOENIX – More rain fell over the East Valley and parts of the Greater Phoenix area on Sunday morning, continuing one of the better monsoons in Arizona’s recent history.

Most of the light showers occurred east of Phoenix, with up to 0.59 inches of rain in Mesa and about 0.16 inches of rain in Gilbert by 9:45 a.m., according to Maricopa County’s Flood Control District rain gauges.

Areas in Scottsdale and Fountain Hills saw up to 0.16 inches while parts of Chandler saw 0.12 inches.

Phoenix had up to 0.08 inches of rain, as did parts of Tempe.

Rain gauges in Surprise and Glendale recorded the lowest rainfall at 0.04 inches.

According to the National Weather Service, the weather is expected to last all day with the likelihood of thunderstorms and rain increasing through Monday.

Weather officials also said that after 11 a.m. on Monday, mostly sunny weather is forecast with a high of around 87 degrees.

Morning radar tracks showers and embedded storms in parts of the Phoenix Valley. During the day, local heavy rains and gusty winds are possible. Drivers watch out! #azwx pic.twitter.com/ZpsJ9LXyFV

This monsoon season, which begins on June 15 each year and ends on September 30, has documented almost 4 inches of rain, according to Jorge Torres of ABC15, making it the second best since records began in 1896.

Motorists are advised not to cross a flooded car wash, even if it doesn’t look deep, as a few inches of running water can still pose a serious risk.

The Arizona Department of Transportation also warns people not to bypass closed road signs as it is not only a risk, but violations could be claimed under state law.

It is recommended that you reduce your speed during storms and maintain a safe distance between vehicles, avoid sudden braking, which can lead to slipping on wet roads, and reduce your speed by slowly taking your foot off the accelerator and braking slowly.