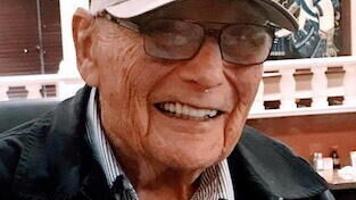 Edward “ED “Bert Babitzke, 92, of Tucson, Arizona passed away on June 6, 2022, in Tucson. Graveside services will be at 11:00 am, Saturday, June 18, 2022 at Edith Ford Memorial Cemetery in Canadian with Rev. Lewis Holland, retired United Methodist minister, officiating. Arrangements and burial will be at under the direction of Carmichael-Whatley Funeral Directors of Canadian. Ed was born March 27,1930 in Canadian, Texas to Bert and Magdalena Babitzke. He started public school at Prairie View School in Lipscomb County, Texas and attended grade school and high school in Canadian, Texas, graduating in 1947. He attended West Texas State University, earning a degree in Agriculture in 1951 and a Master of Education in 1955 , both with minors in Biology. Ed first joined the United States Air Force in 1951 until 1953. Later teaching grade school and high school in the state of Texas from 1953 to 1961. In 1961, he was recalled in the United States Air Force as a Captain, retiring in 1979. Ed married Lena Fasu Pylant in 1950 and they were divorced in 1962. He later married Lois Carol Witt on October 5, 1963. Ed had many hobbies of travel, all things “BEER”, and the collecting of Genealogy. He was preceded in death by his parents, his brother, Ernest Henry Babitzke wife Lois Carol Babitzke. Survivors include his two sons, Edward V. Babitzke and wife Gwen of Sioux City, Iowa and Ricky P. Babitzke and wife Nel of E. Peoria, IL. and many grandchildren and great-grandchildren. Also surviving is a sister-in-law, Betty L. Babitzke; and nieces, Sherri and Kristi. The family will receive friends at First United Methodist Church in Canadian after the ceremony

Metro Phoenix airport is busier now than before the pandemic