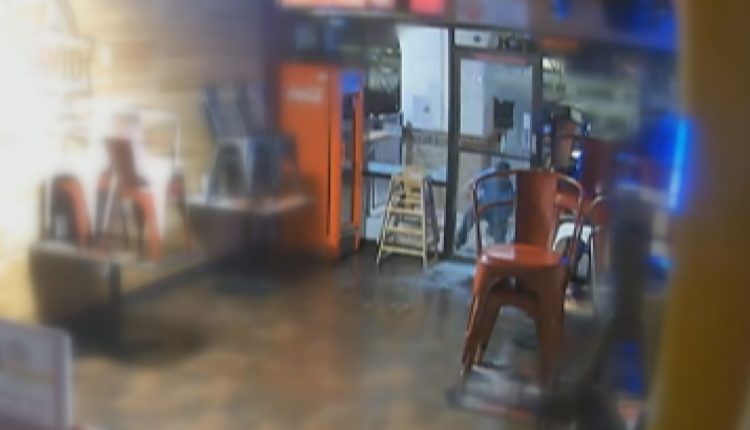 A suspect smashed the glass door of a Mexican restaurant in Phoenix and then stole the cash register.

PHOENIX – When restaurant owner Johnny Byrd walked into work in Phoenix, he knew something was wrong.

Glass strewn on the floor and a surveillance camera revealed that his restaurant, El Taco Santo, was attacked by a masked burglar overnight on Saturday.

“We walked in and to my surprise the back door was all the way open and we knew right away something was wrong,” Byrd said.

He then checked the surveillance video and saw the suspect crawl on all fours, smash down the front door and run inside. He escaped with the cash register.

“It definitely feels like a violation,” Byrd said. “I was pretty shocked to be a victim because overall Ahwatukee is a safe place, we have crime here and there but every town does.”

CAPTURED ON CAMERA: The suspect gets on all fours and then smashes through the front door of El Taco Santo.

The masked suspect escaped with the cash register.

“I want to make sure other companies don’t do what I did. Don’t leave any money behind,” said owner Johhny Byrd. @12News pic.twitter.com/hhZnte2cxd

Though he suffered some casualties, he said he was overall lucky.

“Nothing else was really missing or touched,” Byrd said. “It could have been so much worse, you just have to see the positives that we can recover from.”

With a positive attitude, he uses this as a lesson that hopefully others can benefit from as well.

“I’m just blown away by all the support the local community has shown us after posting on Facebook to let everyone know hey lessons learned make sure businesses don’t do what I did . Don’t leave money or leave it unlocked so they don’t damage it when they come in.”

The Phoenix Police Department is investigating, and in the meantime, Byrd said he will investigate himself.

“They knew exactly what they were doing, it took a total of three minutes,” he said. “We’re looking at the whole video to see if it was someone who cordoned off the place a week ago.”

RELATED: Women allegedly lured men through dating app to get robbed. He fought back.