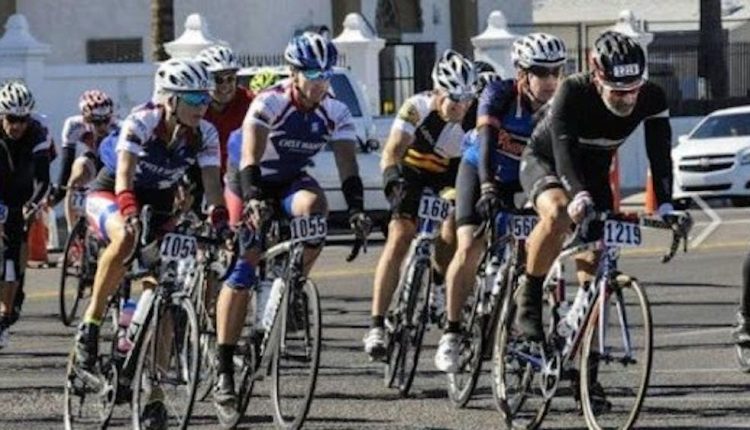 One of this year’s fundraising partners is LOOK! Save A Life and the group has recruited riders to participate in Ride to Save Lives.

The national non-profit lobbies for legislation to protect cyclists and tries to educate drivers about the dangers of unsafe and distracted driving. Former Tucson area firefighter Brendan Lyons, a cyclist who was involved in two bike-car accidents including one that put him in the hospital for more than a month, leads the Arizona chapter of the group.

“This year, I’m stepping up to the plate to raise some much-needed funds in hopes that what happened to me doesn’t happen to anyone else,” said Lyons.

Ride to Save Lives recruited cyclists for Saturday’s race and covered participants’ registration and processing fees when they pledged to raise $500 in pledges or donations for LOOK! Save a Life. Contributions are tax-deductible.

El Tour de Tucson is open to riders of all skill levels, with three different routes of 100 miles, 62 miles and a 32-mile option. For more casual riders, there’s a 10-mile, 5-mile and 1-mile routes.

Ride to Save Lives shines the spotlight on bicycle safety awareness. With over 1,000 deaths and more than 130,000 cyclists injured in crashes on roads in the United States every year, according to the Centers for Disease Control and Prevention, Ride to Save Lives is taking the initiative to bring awareness to the issue. Their purpose is to promote safety and understanding for everyone who utilizes public roads — emphasizing knowledge and awareness, taking the initiative to all motorists and cyclists.

“I’ve participated in El Tour de Tucson for the last 15 years. It’s something I look forward to every year,” said cyclist Raul Berrellez. “Bicycle awareness is very important. You don’t know how many times a car either almost hits me, has helped their car in my lane, or disregards me entirely. It’s great that some awareness is being brought to this.”

New routes for the tour are in place this year, with all route options beginning and ending at the Tucson Convention Center. El Tour de Tucson begins at 7 am Saturday. For the routes, visit El Tour de Tucson.

Let us come to you. The Daily Wildcat, straight to your inbox. news. Science/Health. Sports. Arts/Lifestyle. You choose. You cancel at any time.