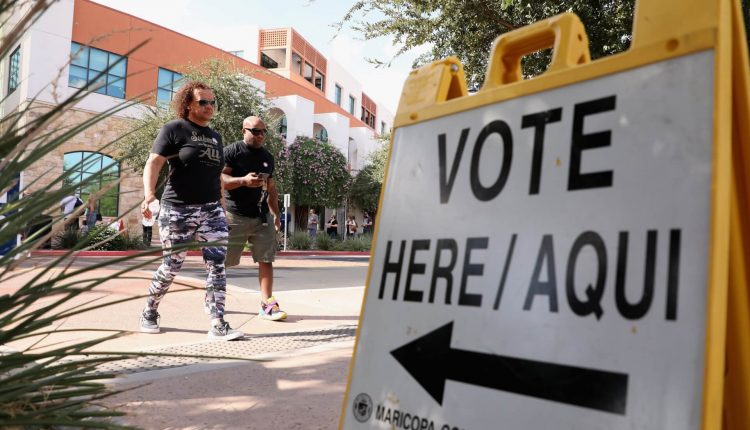 Elections departments across the country are getting tons of near-identical requests for an obscure document generated by ballot-counting machines, spurred by people who insist this record could help detect fraudulent voting patterns that show former President Donald Trump actually won the 2020 presidential election. It is the latest example of the endless, fruitless quest for a smoking gun that has so far yielded no proof of wrongdoing affecting the election results.

But the document, called a “cast vote record,” can’t be used to detect these kinds of patterns, nor is it particularly useful to people who aren’t researchers or auditors, experts say. And the sheer number of requests is overwhelming elections offices as they prepare for this year’s general election.

“The remarkable thing is that there’s really a lot less here than it might seem in both directions. It’s way less ominous than it could be, but it’s also way less useful,” said Max Hailperin, a retired computer science professor who has researched election technology.

Put simply, a cast vote record is the electronic representation of how voters voted. These lines of data appear in a spreadsheet full of zeros and ones to indicate the votes an anonymous ballot contained.

Whether the resulting records can be made public varies around the country, and the exact definition and appearance of what’s included in a cast vote record also varies, depending on the jurisdiction and the voting technology it uses.

But requesters, spurred on by recent instructions from people known for promoting baseless theories about election fraud, are bombarding elections offices with cut-and-paste requests for them.

My Pillow CEO Mike Lindell, known for promoting baseless theories of election fraud, together with a man named Jeff O’Donnell, who uses the moniker “The Lone Raccoon” online, and another far-right internet personality named Lady Draza, are urging people to file the requests and  collect the records in a repository for eventual analysis. They also ask requesters to report back if officials deny their requests, to generate a list of potential lawsuits.

At an event in late August, Lindell touted the need for listeners to request cast vote records, and counties immediately saw a spate of requests. In Colorado, for instance, counties saw dozens of requests after the summit, with one local official comparing the identical requests to a “denial of service” attack that prevents them from doing their jobs, according to Colorado Newsline.

In Arizona’s Maricopa County, the elections department has seen a massive influx of requests for the records. In 2021, 11 requests came in for the cast vote record, elections department spokeswoman Megan Gilbertson said. In 2022, up through Aug. 25, the county has gotten more than 90, with more coming in every day.

Experts say the records can’t be used in the way Lindell and others are suggesting they can.

“I suspect many of the people that are requesting them don’t know what any of it is. They’re just the mules, to borrow that term,” Hailperin said.

Depending on how large the county or town is, the files can be massive. A layperson, using the files alone, would have little understanding of what they’re looking at or how it could be used.

The cast vote record can be tallied to get an unofficial, election night result, but not the final, canvassed vote. The canvassed vote, considered the official results, includes ballots that were provisional or needed adjudication.

Sometimes, ballot images are included as part of the cast vote record. The ballot images can be matched to a given line of data in a cast vote record spreadsheet. That can help an auditor see how a ballot was adjudicated if there were questions about whether a person’s intent was to vote one way or another.

The records can be a useful tool for researchers and auditors. They can find larger trends, like how many people split their ticket, how precincts moved toward a given party over time, or how the method of voting (mail vs. in person) change. When combined with ballot images, the cast vote record can provide a way to audit an election, though the paper ballots would be a better tool.

“The real gold standard for auditing would be to actually go back to the paper ballot itself and not just a digital image of it. But certainly, you get a little bit of extra confidence if you’re looking at the image and cast vote record,” Hailperin said.

You can’t find your own name, or any voter names, in these records. Ballots are by law private, meaning voters’ names are not on them.

Some who are seeking these records believe they will be able to find fraud based on the sequence in which ballots were scanned, Hailperin said. For example, they would flag whether a large number of consecutive ballots came in for one candidate. But, in the case of ballots cast by mail, the order in which ballots are scanned doesn’t always correlate with when the ballots arrived. And citing ballot sequences as proof of fraud is a flawed premise: Different people, with different political affiliations, tend to vote using different methods because of their trust in early voting or other factors.

“They’re not going to tell the story that you want them to tell. If the story you want to tell is that, clearly, this was fraudulent, you’re not gonna get that,” said Dan Wallach, a computer science professor at Rice University who studies election security.

Getting a cast vote record can be easy or impossible

There’s no uniform law around the country that dictates whether cast vote records and corresponding ballot images are public records.

Some jurisdictions make the records readily available online, alongside ballot images, that allow anyone to check the work of an election. Some respond to these records requests with a cast vote record, but won’t release ballot images. Others won’t release either. Others have never received requests for these records until now, so they’re trying to understand how to respond. And still others don’t have a cast vote record because of the technology they use.

Elections departments guard against revealing information that could identify individual voters’ ballots, especially in small places that have only a few voters assigned to each precinct. And they’re sometimes contending with state laws or codes that are unclear as to whether the cast vote record and ballot images should be publicly released. Lawsuits in multiple places, including Arizona and Pennsylvania, are now grappling with these questions.

The release of ballot images tends to be more contentious than the cast vote record spreadsheet.

“There’s sort of a separate question of, is a CVR, legally, a ballot,” Wallach said. “The whole term CVR happened because when you call something a ballot, then a whole bunch of laws kick into place.”

John Brakey, a Democratic activist who co-founded AUDIT USA and was a liaison for the Arizona Senate’s ballot review in Maricopa County, has sued multiple jurisdictions to access ballot images and cast vote records in an effort separate from Lindell’s. Brakey does not believe there was widespread fraud in the 2020 election. But he contends that both records should be combined to provide the next-best option for auditing outside of the hand-marked paper ballots themselves.

“We should be able to use it to build confidence in our election system in this country, to offer people, to prove to them that elections are real,” he said. “In my book, elections are no good unless they’re transparent, trackable and publicly verified with a valid library system.”

Providing both the images and spreadsheets will help improve confidence and transparency in elections, he said.

“The actual act of voting is the secret process. Counting is a public process. And anything less than that, then we do not have elections that we really can trust,” Brakey said.

In Arizona, Brakey has run into trouble accessing the ballot images and cast vote records. In Maricopa County, AUDIT USA sued for access to ballot images and lost — a court ruled that the images were not disclosable public records. The judge pointed to state law that requires electronic data or digital images from ballots be treated “at least as protective as those prescribed for paper ballots.” Paper ballots, the judge noted, must be placed in a secure facility “unopened and unaltered” for 24 months for federal office elections, or six months for other elections. That case is on appeal.

In Santa Cruz County, Arizona, the county took the unusual step of seeking a judgment from a court last month over whether the cast vote record, which it had turned over in the past, was a public record. In court filings, the county said it believed it would be sued by Brakey, so the court should weigh in on the question of whether the records were public. (Brakey said he didn’t intend to sue Santa Cruz County.) The county said requests for the cast vote record violate secrecy of ballots and conflict with state law.

Precinct cast vote records in sequential order or with timestamps raise the possibility that an individual voter could be identified, but randomizing the records and removing the timestamps before publicly releasing the record helps negate that threat, Hailperin said.

Dane County, Wisconsin, posts both the cast vote records and ballot images on its website underneath the heading “Do It Yourself Audit.” The county randomly sorted the records, which don’t contain identifying information. And a few locations’ cast vote records or images weren’t included because of some specific reasons, like saving errors and hand-counts, the website notes.

Ballot images, on the other hand, could possibly be connected with a person, should that person have a distinctive handwriting or place a specific mark on their ballot. And that leads to not only privacy concerns, but potential for vote-buying, Wallach said.

A voter could mark their ballot in a particular way, or even vote in a particular pattern in down-ballot races, as proof to the person who paid for their vote that the voter held up their side of the bargain, Wallach said.

Still other parts of the country don’t have cast vote records at all. Connecticut, for example, uses tabulators that don’t create them, said Gabe Rosenberg, chief of staff to the Connecticut Secretary of the State. That hasn’t stopped the office from getting requests, though. Some of the requests mirror the Lindell language, while others seem to have originated from a local Facebook group. Rosenberg has responded to the requests by explaining there are no such records that meet the request.

For the individuals filing the requests, Rosenberg doesn’t think they’re doing it maliciously to waste his time. But for those coordinating the requests nationwide, he thinks “part of the benefit for them is that it takes up the entire day.”

‘This is an emergency’: Crist slams DeSantis’ approach to insurance crisis