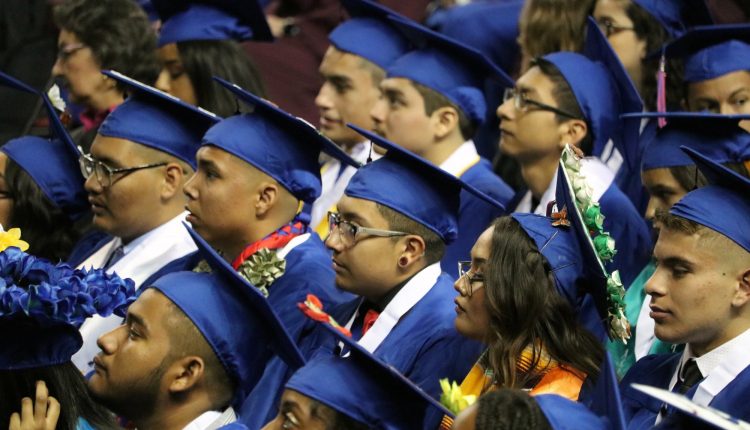 Diego Diaz is a college sophomore studying electrical systems engineering with the hopes of one day designing microchips at a company like Intel or Samsung. But his path to employment at a tech giant has been frustratingly lengthened by his undocumented status.

Since enrolling at Arizona State University, Diaz has been forced to take two semester-long breaks to earn enough for his tuition.

“I’m almost 22. I’m supposed to be graduated by now,” he said. “But because I had to take these intermediate pauses in between, that definitely put a brake on the momentum.”

Diaz has lived in Arizona since he was four years old and graduated from ASU Preparatory Academy in Phoenix. But because of his immigration status, Diaz is ineligible for in-state tuition, despite otherwise meeting the same residency requirements as his peers.

That could all change this year if voters change the law and make higher education more accessible for the more than 3,600 undocumented students who graduate from Arizona high schools every year.

The ballot measure, Proposition 308, would allow all Arizona students, regardless of immigration status, who received a high school diploma and spent at least two years in the state to be eligible for state-funded financial aid and in-state tuition at public colleges and universities. It repeals provisions of a law voters passed in 2006, which barred non-citizens from receiving state-subsidized services, in-state tuition or financial aid.

Since then, undocumented students have been forced to pay out-of-state tuition rates, which are nearly triple in-state rates. Base tuition for an undergraduate degree at Arizona State University for a resident student is around $10,978, while the nonresident rate is $29,952.

In 2019, some reprieve was offered when the Arizona Board of Regents, which governs the state’s universities, voted to allow undocumented students who spent at least three years in an Arizona high school and graduated to pay 150% of in-state tuition. That cuts an undocumented student’s tuition at ASU to about $16,467.

That rate is out of reach for many undocumented students, especially when they have no access to publicly funded financial aid like Pell Grants or state scholarships.

Many, like Delia Rodriguez, consider leaving Arizona to take advantage of more welcoming programs in other states. The social work major briefly entertained the idea of moving to California before enrolling at Grand Canyon University, a private institution not beholden to state residency requirements, in order to stay close to her family.

“A lot of undocumented students have to leave Arizona,” Rodriguez said. “We want to stay here and we want to contribute to our communities but a lot of us are being pushed to leave.”

Proposition 308 would level the playing field for her and other undocumented students.

“We’re not really asking for anything — just to be able to afford it,” she said.

Critics argue that the measure will raise taxes. A Joint Legislative Budget Committee analysis estimated a possible impact on state spending if opening accessibility to higher education incentivizes enrollment at community colleges. Universities, however, wouldn’t see a change because their funding isn’t tied to enrollment. Both universities and community colleges would face a decline in revenues from tuition, but the analysis notes that this loss could be offset by increased enrollment over time.

The report notes that legislative budget analysis made no attempt to account for the economic impacts the proposition may have by increasing the number of college degrees earned, one of the key arguments made by proponents.

The measure’s backers argue the proposition simply completes investments made in education throughout elementary and high school. The U.S. Supreme Court’s 1982 ruling in Plyler v. Doe requires states to provide all students with free public education through the 12th grade, but education beyond that point is left up to the state. Ensuring that undocumented students have equal access to college degrees not only continues that initial promise but also results in higher returns, supporters say.

“If we’re investing those tax dollars, why would we not want those students to stay in Arizona and contribute to our economy?” asked Lisa Hoberg, a Republican state and precinct committeeman. “If you look at it from a return on investment standpoint — as a conservative Republican should — that’s what we’re missing out on: a return on investment of the tax dollars we put into their education.”

A report from the American Immigration Council, a pro-immigrant advocacy group, estimates that passing Proposition 308 could result in up to $4.9 million a year in additional federal, state and local tax revenues. The report adds that increasing the ranks of degree holders in the state could alleviate some of the labor force shortages Arizona is facing.

Ximena Silva Burrel has been an Arizonan since she was four months old, when her parents made the trek from Sonora, Mexico, to the United States. The 18-year-old is now a freshman at Grand Canyon University and is interested in becoming a teacher. But the high cost of tuition is a concern for her, and she worries it’ll get in the way of her goals. While base tuition rates at GCU are the same for both resident and non-resident students, at around $16,500 a year, tuition at state universities if Prop. 308 passes would be more accessible and allow Burrel to afford more years in school — especially if she was able to apply for state funded scholarships.

A September survey from the Arizona School Personnel Administrators Association found that 9,600 teaching positions were open for the 2022-2023 school year, and as much as 42% were filled by teachers who don’t meet standard teaching requirements.

Lawmakers added Proposition 308 to the ballot in 2021 with bipartisan support. Republican state Sen. Paul Boyer sponsored Senate Concurrent Resolution 1044, which passed through both chambers with the help of six Republicans and every Democrat lawmaker.

At an Oct. 27 news conference in support of the proposition, state Rep. Joel John, R-Buckeye, one of the six Republican who supported SCR1044, called the measure common-sense policy that removed unfair obstacles for undocumented students who are just as much a part of their communities as students who are lawful citizens.

“These are Arizona kids and their success is Arizona’s success,” he said. “They’ve been educated in our schools, they’ve been raised in our churches, they’ve played on our kid’s little league teams.”