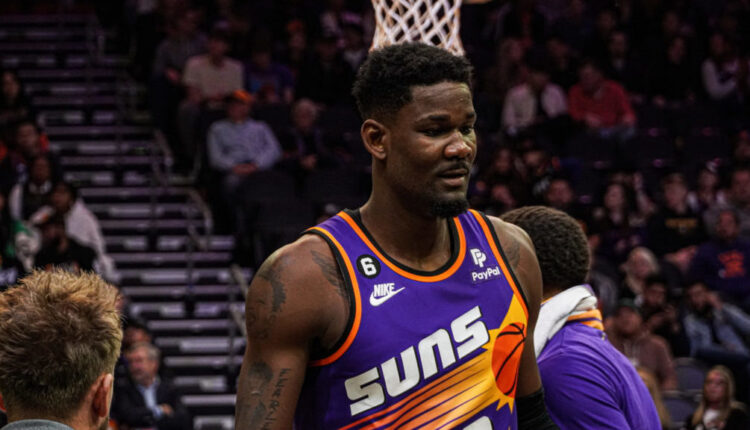 The Phoenix Suns remain among some of the betting favorites to reach an NBA championship this season.

Yes, it’s true even though Phoenix (21-22) has lost seven of its last eight games and 10 of the last 12. Presumably, a healthy roster should shift the team back into playing above-.500 basketball, if not pushing them back toward the top-half of the Western Conference.

Sorry in advance Phoenix fans! For the Suns, it’s about the status quo changing internally.

It’s time for a star to step up next to Devin Booker, Pelton writes.

In a league where all centers combine to average 16.6 points and 10.9 rebounds per 36 minutes with a .628 true shooting percentage, Ayton’s own marks (21.3 points and 12.0 rebounds per 36, .619 TS%) are unspectacular. After matching the Indiana Pacers’ max offer sheet to Ayton last summer, the Suns can reasonably expect more from the former No. 1 pick

Suns fans likely will eye-roll at that suggestion, but the lack of an obvious move on the trade market that wouldn’t make Phoenix a star in return makes it more plausible than other options.

For sure, Ayton’s inconsistencies have been the narrative of his career thus far. That hasn’t changed this season, where he’s gone through spells of appearing disjointed followed by runs of more focused basketball.

A seven-game streak of double-doubles to end November included scoring performances of 28, 29 and 30 points.

Those types of games are within the realm of possibility.

Ayton, remember what maybe the one didn’t see that coming explanation for the Suns reaching the 2021 NBA Finals. His defense and rim-running scoring when teams threw everything at stopping Booker and Paul filled in the Suns’ holes as they dealt with injuries to Paul and more.

But putting Ayton in a position of operating the offense is another matter altogether, something he’s struggled with at points this year.

Pelton arguably should have called Mikal Bridges’ the “better bet” at giving Booker a No. 2, but there’s a counterargument the Suns wing is at his best playing complementary offense to save his legs for the defensive end.

Ayton arguably belongs in that same category, where patrolling the backend of the defense and setting screens while diving on offense brought the most out of his star guard teammates.

That’s the conundrum Phoenix finds itself in now, however. When you point at who makes more money and from a profile standpoint has more potential left to tap into, Ayton is the guy to point toward — hence why he was the No. 1 pick—when wondering who internally can jump the Suns into contender status.