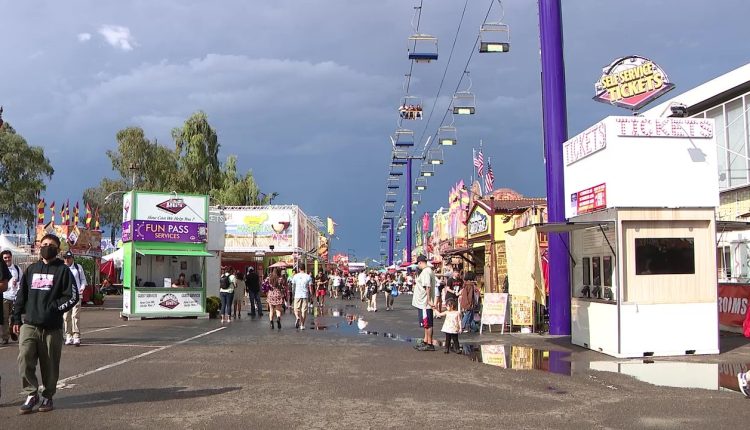 PHOENIX – Events like haunted houses and fall festivals only have a few short weeks to rake in money, mainly the four weekends leading up to Halloween.

What’s scary for organizers is when one of those weekends is a wash-out, like it was on Saturday, Oct. 15, as all eyes were to the skies for a pretty intense storm that rattled the Valley.

Natasha Martinez was at the Arizona State Fair in Phoenix when she says, “all of a sudden it was so fast, with a lot of rain coming down at one time.”

“It was like 10 minutes of continuous rain,” she said. Martinez is the fair’s marketing director.

Only a few puddles and umbrellas remained after an early afternoon downpour.

She says rain won’t stop the annual month-long event, but more severe weather can cause a safety hazard for the rides.

“It’s still going unless there’s high winds or lightning, of course. Then they will close it down,” she said.

The first day of Phoenix Pride wasn’t brought to a halt, either.

The quick downpour, he says, didn’t dampen the fun, or dancing.

“Save for a few queens with running mascara, and some folks in wet clothes, we managed to weather the storm quite literally,” Helfgot said.

Despite some looming and glooming clouds, Blaise Klein, who was exclaimed at the pride event, “Bring it on!”

Attendees were determined to have a fabulous time, rain or shine.

“Rain? Rain can’t stop us,” said Holly Hepner, who was also at the event.

Later in the evening, Mike Cosentino, organizer of Hop Box Oktoberfest said, “We got rained out.”

The downtown Phoenix event had to call it a night, giving a rain check to those holding beer and umbrellas.

Also calling it quits was Fear Farm and a Trunk or Treat event in Queen Creek.