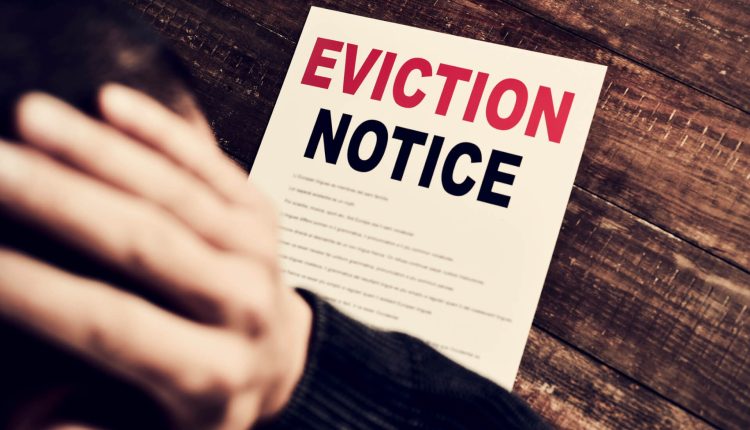 Dominique Medina began worrying about the untenable housing situation in Phoenix around a year ago when his sister was evicted. Then, amid skyrocketing inflation and rent increases across Phoenix, in August he was given a 30-day notice to vacate the place he’d called home for five years.

“There’s this attitude that people who end up in those situations made bad choices,” Medina told the Arizona Mirror. “It’s like, no, sometimes you do everything right. You’re working a full-time job and you still can’t manage to make ends meet.”

Medina and his sister, whose family has been in Arizona for eight generations, are among thousands in the Valley who were evicted over the past year amid spiking rents and stagnant wages.

Eviction filings in Maricopa County dropped during a COVID-19 moratorium from March 2020 to August 2021, but they’ve now been increasing steadily for the past few months.

In September, 6,685 eviction cases were filed in Maricopa County Justice Courts. That’s up from 6,574 the previous month and makes for the third month in a row that eviction filings in the county surpassed the numbers seen during the height of the 2008 housing crisis.

However, the county’s population has increased by more than 650,000 since 2008, so the rate of evictions per 100,000 people right now is still significantly lower than the rate in 2008, at around 140 evictions per 100,000, compared to around 180 in 2008. Not everyone who has an eviction filed against them in court ends up actually being evicted, but the numbers from the past few months portray a simple truth: Many people in the Valley are struggling to afford housing here and more of them are losing their homes.

The average amount awarded to a landlord who wins an eviction case in Maricopa County has gone from $1,977 in 2019 to $3,337 this year, demonstrating just how much rents have increased in the past three years.

Rent is Too High campaign

This trend is one of the reasons Medina and his colleagues at Fuerte Arts Collective, where he is the digital organizer, launched their “Rent is Too High” campaign last week.

The collective is urging state legislators to sign its pledge, promising to promote policies that change housing from a commodity to a human right, advance solutions to help eradicate homelessness, use housing policies to lift up marginalized groups and to invest in the housing supply, as well as rent, utility and eviction-relief assistance.

During the news conference, Solorio called for the state legislature to deal with the housing crisis when it begins work in January. In his view, that includes getting rid of the law that prevents cities from implementing rent-control and the law that prohibits cities from requiring developers to include low-income housing in the projects.

Arizona cities are barred by state law from implementing local rent control ordinances. Such provisions typically limit landlords to rent increases of 5-10% while the same tenant occupies the rental, protecting them from large increases and providing more stability for renters. Some tenants in the Valley saw increases of more than 60% in the past couple of years.

Organizations that advocate for landlords say that rent control policies actually do the opposite of their intended goal.

“What happens when you try to further regulate in this area (is) you drive rents up,” Courtney Levinus, president and CEO of the Arizona Multihousing Association, told the Arizona Mirror. “You reduce the amount of construction because people are not willing to build and own in an area where there’s adverse regulations.”

It’s true that rent control policies can cause the value of both rent-controlled and nearby properties to decrease or stagnate, but some cities, like San Francisco, have implemented rent control policies that exempt new construction to prevent the law from discouraging new multifamily housing projects.

It’s also clear that rent control policies can provide significant relief to tenants, and that they can help people who would otherwise be forced to relocate to stay in neighborhoods where they’ve developed strong ties.

How do we fix this?

But Levinus says that rents increased in the past two years because landlords were trying to recoup losses incurred during the eviction moratorium and because costs of owning and running rental properties have increased due to steep inflation. Some of Arizona Multihousing Association’s members lost hundreds of thousands of dollars in unpaid rent that they will likely never recoup, Levinus said.

Only about 9% of a tenant’s rent is typically profit to a property owner, she said. That might mean a modest income to a small mom-and-pop landlord, or millions for a company that owns multiple apartment buildings.

While advocates for landlords and those fighting for struggling tenants are typically in opposition, they both agree that zoning laws are a problem, although they don’t necessarily line up on the specifics.

“We need to end exclusionary zoning practices that prevent the building of affordable housing types, like casitas,” Solorio said.

As a child growing up in California, Solorio said he and his family lived with two other families, with a total of 18 people in a three-bedroom apartment because of the high housing costs there. His family eventually saved enough to move to a tiny casita, which gave them a feeling of stability, he said.

A casita is a smaller living unit or guest house located on the same lot as a larger home. The construction of casitas is allowed in Phoenix, but comes with a bevy of regulations, including that the guest house can’t be advertised as for rent publicly and that it can’t be separately metered for utilities from the main house, making renting them to tenants extremely difficult.

“They only want to see single-family homes on large lots with big yards and lots of separations and while that’s nice and it’s great for some areas,” Levinus said of zoning laws in many Arizona cities. “We have zoned too much of our land to be just single-family. We have not adequately zoned for the density that’s needed to support our current population, let alone our future population.”

For example, the vast majority of Phoenix’s land area that is designated for residential use is zoned for single houses or low-density dwellings, with only a small fraction zoned for high-density structures like apartment buildings. She also believes that far too much area in Arizona municipalities is zoned for commercial use, especially in an age of online shopping that is seeing big box stores closing and less demand for physical storefronts.

There is currently a boom in apartment construction in the Valley, with around 5,000 apartment units either already constructed or under construction this year, but Levinus said available space for high-density residential construction will soon dwindle.

Plans for apartments and townhouses after that will face an extensive rezoning process that includes public hearings that can be held up by NIMBYism, or “Not in my backyard.” This stopping point is typically caused by a group of neighbors to the proposed project who speak out against it because they don’t want apartments built in their neighborhood.

“Very few projects can make it through that process,” Levinus said.

She predicts that, if the zoning codes are not modernized, it will exacerbate the housing shortage as potential apartment developers won’t be able to find anywhere to build.

How to get more affordable housing

Tenant advocates also believe municipalities should be able to require developers to build affordable housing as a certain percentage of their projects, something that Arizona law prohibits.

“We have a state where property is king and we lose sight of the greater public good, and have laws like the inclusionary preemption law that really hurts our ability to build more affordable housing,” Lauren Kuby told the Arizona Mirror.

Kuby is a former member of the Tempe City Council, where she advocated for affordable housing. She is currently one of the Democratic nominees for the Arizona Corporation Commission and she also leads the Stardust Center for Affordable Home and Family at Arizona State University.

Cities can negotiate with developers behind closed doors to persuade them to include affordable units in a development, Kuby explained. For example, a city could allow a developer to build a structure taller than current code permits in exchange for designating 10% of their units for affordable housing.

Medina, the Fuerte representative who was forced out of his home in August, never made a late payment, he said. But his landlord had been renovating his other rental units and then increasing their rents.

“Landlords think they can get a lot more money from new tenants that can afford it,” Ken Volk, president of Arizona Tenants Advocates, told the Mirror. “So, the landlords give their current tenants a 30-day notice to vacate or an eviction notice.”

When Medina got his 30-day notice, his world was turned upside down.

“Losing this house was more than just getting evicted from a house I was renting,” he said. “It was losing that security. The stress of having that housing insecurity is just a lot to deal with.”

Medina and his roommate found a new place to live, but had to take on a third roommate to make rent. And even with that additional help, things are still tight.

“Now it’s a situation where, if any one of us can’t pull it (paying rent) off that month, it would be really a stretch to think that the other two of us could pay that amount of money,” Medina said.

His group is using their art, including stickers, posters and a documentary series to bring attention to their view that housing is a human right, rent is too high and that legislators need to take regular people into consideration when working on housing legislation, instead of focusing on corporations that have lobbying power.

Don’t Drill Your Own Teeth! And Quashing Other Rotten Dental Advice on TikTok