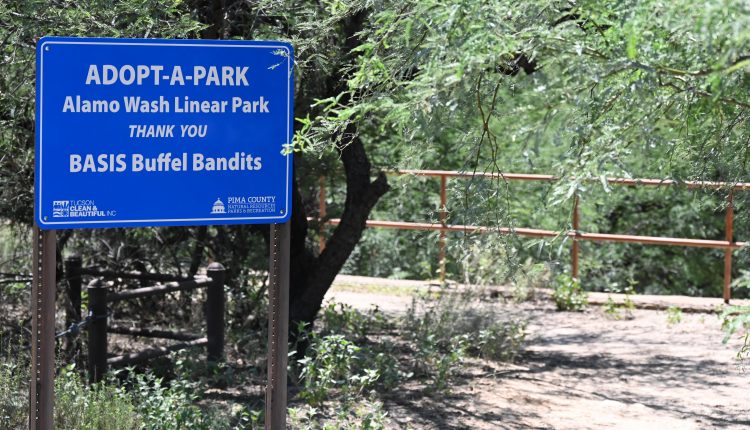 Ex-Mayor Rothschild ‘honored’ to have Tucson greenway named after him

Former Tucson Mayor Jonathan Rothschild will have his work memorialized with the renaming of the Alamo Wash Greenway. Rothschild considers it “an honor” and “kind” that the city will remember him this way, he said.

Rothschild was in office from 2011 to 2019, holding the mayor’s gavel for two terms before current Mayor Regina Romero.

As the 41st mayor to hold the office, Rothschild had a “passionate” role in the improvement of Tucson’s parks and greenways, Midtown Councilman Steve Kozachik wrote in a newsletter last week. Kozachik, along with Councilmembers Nikki Lee and Paul Cunningham, submitted an application to rename the greenway to honor the former mayor. Public comments on the proposal can be mailed to Tucson Parks and Recreation Director Lara Hamwey, 900 S. Randolph Way, Tucson AZ 85716.

“It’s very kind, and it’s an honor that people want to remember you and want to remember you in a way that you would like to be remembered,” Rothschild said. Tucson started a 45-day public comment period two weeks ago, with people able to submit their thoughts before Oct. 9 at midnight.

The Alamo Wash Greenway, which will take Rothschild’s name, runs from the East Side, from near South Kolb and Escalante roads north to near Broadway, with a jog to the west near Park Mall, and then north through the neighborhoods between Wilmot and Craycroft roads . Near Tucson Medical Center, the wash heads northwest again, meeting the Arcadia Wash near Glenn Street and then running to the Rillito River just east of Swan Road. The 8-mile greenway generally follows the route of the wash, with some deviations to allow for a more developed pathway.

It passes through three City Council awards — 2, 4 and 6. The councilmembers from those wards each signed on to the recommendation to honor Rothschild.

The renaming comes as the city gets ready to move onto the second phase of a $225 million effort to upgrade greenways, or trails, with bike and pedestrian connections, trees, lighting and shared-use paths over a decade.

The improvements are funded by park bonds that voters approved in 2018 with the passage of Prop. 407, which included $13 million for upgrades to the Alamo Wash Greenway.

It passed during one of Rothchild’s last years as mayor. When he came into office, about two decades had gone by without the city making a major effort to improve its parks, he said.

“One of the reasons we did this when we did it (get Prop. 407 passed) was we had not invested in our parks in years and years and years,” he said. The tenure of Mayor Bob Walkup was marked by the 2008 financial crisis, which thinned out budgets and staff of local governments like Tucson, and before that, more attention was being spent on fixing and building roads and managing water resources, Rothschild said.

“It’s when you can and when the opportunity is there, when the economy is right,” he said about improving parks and greenways. “Remember, you are asking people to increase their taxes” when pushing for park improvements, he said, and “it’s pretty hard to go out and increase their taxes at a time when there’s economic uncertainty.”

Tucson’s City Charter, the current founding document for the city adopted in 1929, gives officials “four primary responsibilities,” Rothschild said, “police, fire, roads and parks.” Still, when Tucson residents were polled, Rothschild said, their priorities were always roads first, then police and fire behind that. Parks are seen “more as an amenity as opposed to a necessity,” he said.

The thinking shared between City Council and Mayor Rothschild at the time Prop. 407 was passed, he said, was that “we’ve done road, we’ve done police and fire, we know we have a need here. We’ve got to take this to the voters and see if they’ll do it, and they did.”

Almost 90,000 Tucsonans approved Prop. 407, which was 56 percent of the vote. The improvements will roll out in three phases, which includes projects throughout the city, and the first phase finishes this year.

Rothschild explained that the development of three greenways along the Arcadia, Alamo and Rose Hill was meant to connect the north and south sides of the Chuck Huckelberry Loop through town. With the Huckelberry Loop encircling the city, Rothchild pictured the greenways to work like “spokes” in a bike wheel.

“From a mayor’s point of view, you want to be able to connect” different parts of the city, he said. “The loop is this great rim, but unless you have spokes within the rim, the rim’s nice, but it would be great to have the spokes. That’s what these greenways are.”

Tucson is more oriented towards “conservation” and “environmentalism,” Rothschild said, and programs such as current Mayor Regina Romero’s Million Trees Program is a good example of that, he said. Rothschild also had a tree planting program, Trees for Tucson, though he said the goals of that program “were more modest.”

A greenway seems more appropriate than a “police station or a fire station” for remembering Rothschild’s mayorship, he said.

Important public projects such as road and parkway improvements take time, Rothschild said, but attaching a mayor’s name to parts of the city that they worked on can help show residents what’s been done with their tax dollars and votes.

“It’s kind of nice sometimes to connect electeds up with what they helped to accomplish,” Rothschild said. “I think that’s a reason to do it.”

Rothschild is “a bigger walker,” he said. “I like to hike, and I like to urban walk every now and then, so this is for people like me.”

The “Mayor Walkup Interchange” is an overpass on Kino Parkway over 22nd Street dedicated in 2017 to the mayor who championed the Regional Transportation Authority, a board of local governments that decides how to upgrade the metro area’s roads.

“For him that was personal,” Rothschild, who described Walkup as “jolly,” said. “He was big into the RTA, this was an RTA project and this was an important part of what a city could do.”

At his dedication ceremony, Walkup jokingly said that the traffic count for his overpass was 100,000, Rothschild said. He was Tucson’s last Republican mayor and died in early 2021.

The “Tom Volgy Underpass” through Speedway on the University of Arizona campus is named after Tucson’s mayor from 1987 to 1991. Volgy has been a professor at UA since 1971, while serving on the Tucson City Council from 1977 to 1987 before becoming mayor. He advocated for more access to biking and walking routes, Rothschild said, and tried to pass a voter initiative to take Speedway underground.

The Volgy Underpass was dedicated to the former mayor, who still teaches Political Science at the UA, during Rothschild’s term in 2016, and that’s when the current tradition of naming places after Tucson mayor’s started, Rothschild said, though Tucson already had other spots named after a few of its mayors.

Rothschild said about his dedication, “It’s nice to see that while you’re alive” though he assured “I’m not going anywhere.” It’ll be nice to be there and see his dedication, he said, and even better to walk along the Rothschild Greenway.

In the Rush to Curtail Abortion, States Adopt a Jumbled Stew of Definitions for Human Life

‘He Stood His Ground’: California State Senator Will Leave Office as Champion of Tough Vaccine Laws