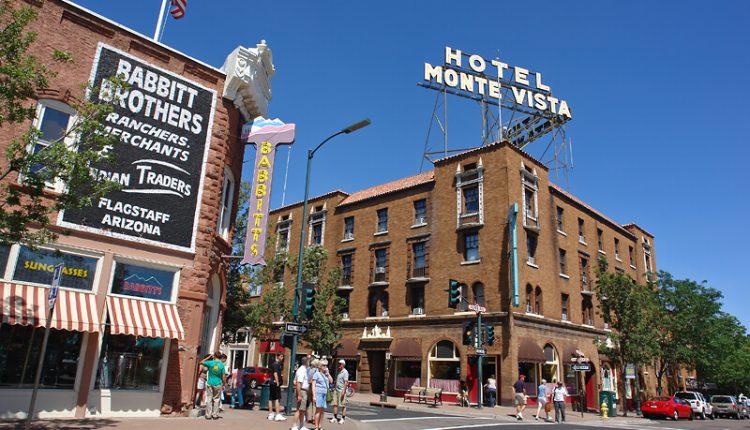 Faced with rising housing costs and shrinking supply, Flagstaff officials are hoping voters will do something no other city in Arizona has done: use its bonding authority to increase the supply of affordable housing.

That money would be used to alleviate some of the problems outlined by a survey conducted in 2021, which found that as much as 58% of residents were considering leaving the city due to high housing costs. With the $20 million, the city plans to increase rental and homeownership opportunities through redevelopment and investment strategies.

Lee Grafstrom, the lead tax policy analyst for the League of Arizona Cities and Towns, said he’s not aware of any other Arizona cities selling bonds to build an affordable housing supply.

What does it do?

City-owned housing would undergo a much-needed facelift, said Devonna McLaughlin, CEO of Housing Solutions of Northern Arizona. Not only are public housing units in Flagstaff outdated — having been built decades ago — but they tend to be single-story constructions. Adding just one more story could double the number of residents who can benefit. And for a city like Flagstaff, which is surrounded by national forest and has limited land to develop, upward development is preferable to sprawl.

Underutilized spaces, like abandoned hotels or commercial buildings, would also be redeveloped to create new rental units. Sarah Langley, a spokeswoman for the city, estimated that could result in as many as 75 new units.

The rest of the funding would go towards increasing financial incentives for private developers and boosting the city’s existing homebuyer’s assistance program. Without incentives to offset the financial losses of charging renters market rate prices, developers are unlikely to add affordably priced units to their projects on their own. Langley said the funding could lead to incentives that convince developers to build as many as 500 more affordable units.

How is it paid off?

The impact on property taxes, which pay back the bond, are projected to remain at about 80 cents per $100. That rate has been the same since 2021 and is actually a decrease from previous years; at its peak in 2004, it was at 98 cents per 100 dollars. Because the city has stayed on track with the payment of previous bonds, the effect on property taxes isn’t expected to increase.

“The city is currently paying down existing bonds, which then provides capacity for new debt,” Langley said in an emailed statement, “In fact, over the past three fiscal years, the city has paid down $15 million in bond debt, with another $6 million set to be paid off this fiscal year. By adding new bonds as old bonds are paid off, new projects can be funded within the existing secondary property tax rate.”

While rejecting the bond measure would technically lead to even lower property taxes as the city continues to pay off existing debt, McLaughlin doubts that would be the case for long. Other bonds would likely be proposed later and possibly approved instead of the housing bond, it’s just a matter of deciding which ones voters want to spend their money on.

McLaughlin argues that housing is a worthwhile investment and involvement from the public sector is sorely needed in a market that shows no signs of self-correcting.

Flagstaff’s desirability as a travel, retiree and student hotspot means a lot of its housing demand comes from non-residents. As much as 22% of the available housing in Flagstaff is eaten up by second homes which are often left vacant and only 33% of short term rentals in the city are occupied by a Flagstaff resident supplementing their income. The external demand on housing in the popular getaway city, coupled with the limited land available for development, drives up prices.

“The private sector could say, ‘Hey, in this new development that we’re building, we’re going to only sell to owner-occupants. They haven’t done that, and I don’t think they’re going to,” McLaughlin said. “If the private sector wanted to come up with a private sector solution, it just hasn’t materialized. So, in the meantime, how do we get solutions and inventory that benefit the folks, households and the workforce we’re trying to benefit? I think we’ve got to pay for it.”

The high cost of living has far-reaching effects for local public services, like schools.

Mike Penca has been superintendent of the Flagstaff Unified School District since 2017, overseeing the district’s 15 school sites. At the beginning of that tenure, every position was occupied by the first day of classes. In recent years, an increasing number of critical hourly positions — like special education instructors, bus drivers, food service workers, crossing guards and custodians — are vacant. Roles have been expanded to encompass the extra work, and bus routes are under constant revision. Even the transportation director drives a daily route.

Wages, Penca said, just aren’t high enough to offset living costs in Flagstaff, despite the fact that the city has the highest minimum wage in the state at $16.80. As much as 45% of Flagstaff households are considered housing cost burdened, meaning more than 30% of their monthly income is spent ensuring they have a place to live. A survey of rents from November 2021 to January 2022 found that the average rent for a one-bedroom apartment was $1,497, an almost 19% increase from the previous survey conducted a year earlier. Schools have little recourse to resolve this imbalance, having set budgets with minimal flexibility.

“Housing costs are increasing at a faster rate than our wages are and we’re not in a position to be able to keep up with those soaring housing costs in our community,” Penca said.

Hiring teachers has become trickier, too. Often, an offer letter is met with reconsideration after a potential hire researches the area. More than one has backed out or left later, once they experience the shortage of affordable housing in person, Penca said.

Recruiting teachers with specializations in math, science or foreign language — never easy to begin with — has become even more difficult, Penca added. Several teachers hold second jobs or live outside Flagstaff, some as much as an hour away in Cameron, on the Navajo Nation.

“People are coming from all directions, and that’s challenging because it’s already a difficult job — and then you have to get up earlier, drive maybe an hour to get here in the morning. It really extends the length of their day,” he said.

Enrollment has also decreased over the years, which Penca attributes, in part, to struggling families moving out of the city. In 2016, about 9,828 students made up the Flagstaff Unified School district, but today that number is at 9,094.

“You’re not seeing as many young families. If you’re not able to buy into the home market, you’re kind of priced out of the community,” Penca said.

Local businesses, dependent on minimum wage workers, have been forced to tighten their budgets as residents move out. John Conley has been the chef and owner of two restaurants in Flagstaff for more than 30 years: Salsa Brava, a made-from-scratch Mexican restaurant and Fat Olives, a pizzeria.

For the last three years, both have been operating under an employee shortage. Faced with 18 unfilled positions, Conley has been forced to downsize the menu, cut hours and increase table shares for waitstaff.

A general manager of 17 years recently struck out for Wisconsin, where rents are more affordable, and while the assistant manager was moved into the vacant role, Conley hasn’t been able to find a new assistant manager.

While the post, and others like it, have garnered a number of out of state inquiries, Conley estimates his applicant dropout rate at around 98%. Once potential hires look into the city’s rental market, they inevitably withdraw their interest.

Proposition 442 is a start, Conley said, but it is far from a complete solution. More investment is needed to ensure that the city’s workforce, and by extension its economy, remains viable. The inaccessibility of housing is not just detrimental to current residents, Conley warned, but it also promises to preempt any potential growth.

“Flagstaff has not been able to attract the workforce that is needed to manage our businesses as a result of not enough housing — and that which is available is unaffordable,” he said.