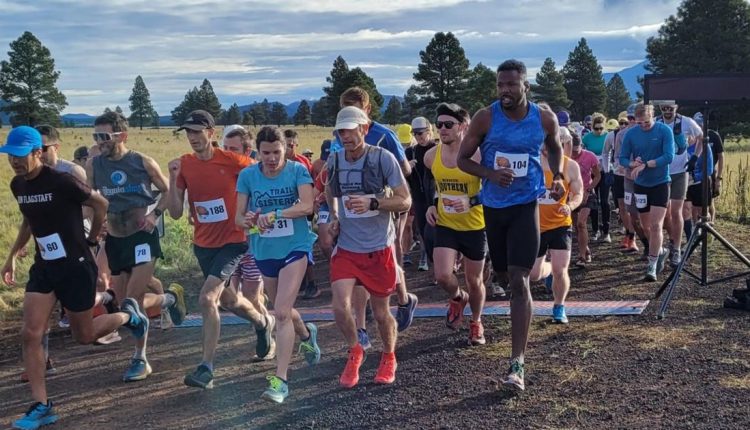 Despite the change in venue due to the Pipeline Fire flooding that closed Schultz Pass Road, the top of the leaderboard was Soulstice deja vu all over again.

In the short course, John Dailey defended his title by racing the 5.5-mile out-and-back course in 36.59, not far ahead of second place overall finisher Eric Bohn, who won his first master’s title in 37.53. On the women’s side, Janie Goldsworthy (3rd overall) also defended her title in 43.01 while Grace Daiy took the master’s title in 47.02.

The race was followed by an epic party at the Langner Ranch with another Aspen Sports post-race raffle, the Pay N’ Take party and our first ever live music featuring guitarist Paul Webber.

However, the biggest winners were all the kids that benefit from Big Brothers Big Sisters of Flagstaff mentoring programs. Thanks to our many shirt sponsors, the Aspen Sports Raffle and runners who guaranteed themselves a spot in the race by donating their Arizona Charitable Tax credit of $400 to BBBSF, the 25th anniversary Soulstice Mountain Trail Run raised more than $15,000 to create and support one- to-one mentoring relationships that ignite the power and promise of youth.

These new course records may well stand a lifetime as next year Soulstice will be moving slightly westward again to the Spring Valley Trail system and its challenging hill climbs and golden stands of aspens.

Getting into Soulstice will be even more competitive as we have reached over 140 legacy runners who are guaranteed entry. Next year the race is on October 14 with registration opening on New Year’s Eve and with the limited 225 spots to be determined by our April 1 lottery. Make sure you enter early or guarantee your entry by taking the 2022 Arizona Tax Credit (which you get back as a line item credit!) and we will see you at Spring Valley Cabin next fall!