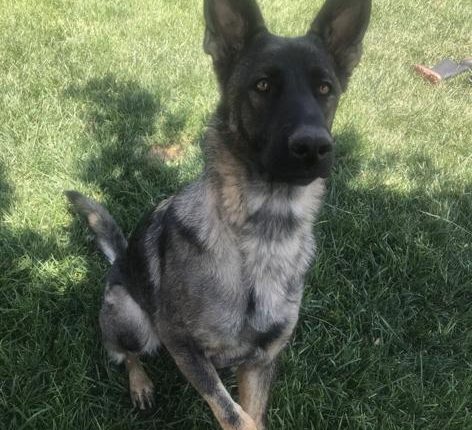 SNOWFLAKE – A Snowflake-Taylor police officer shot and killed a one-year-old German Shepherd in front of a young mother and four children on August 15 while responding to a false alarm in a house, according to Destiny Cates, 35, of Snowflake. The dog survived after treatment in the Valley. Police said the dog “attacked” the officer who had no choice but to shoot him.

Cates is a married mother of seven children aged three to 16 and the proud owner of a “smart” wristwatch with an “SOS” function. Around 10 a.m., Cates said the watch on the mother’s bedside table was charging when her six-year-old son decided to play with it. Apparently the boy activated the SOS feature on the watch and an emergency alert went off on every emergency contact from Destiny Cates, including her parents in Vernon and a sister-in-law in another state. The recipients tried to contact Destiny, but the watch was “vibrating” while it was charging, and she was busy with one of the other kids at the time and didn’t know the alert was there, she said.

The four-legged family member Hazel, a one-year-old German Shepherd whom Destiny calls her “eighth child”, also lived with the Cates family. According to Cates, when her sister-in-law couldn’t get through outside of the state, the relative alerted a neighbor of Cates who went to the house to see what was going on. The neighbor arrived just before an officer Shelton from the city police also responded to the house, Cates said.

In a September 9 press release, Snowflake-Taylor Police Chief Robert Martin said the department received a “911 hanger” and dispatched an officer to the house when police were unable to reach anyone at the residence.

Cates, four of their children, and Hazel were in the living room with the curtains open. You could see the front of the house. Hazel is “not a bad dog at all,” said Cates. At the age of one, the animal becomes “excited”, she said, but has shown “no aggression at all”. According to Cates, when the officer approached the front door, Cates opened it and Hazel ran to the door and barked. According to Cates, the officer backed away, drew his gun, and fired at the dog, which was outside at the time but only five feet from that of the younger children. Cates said the officer shot twice and hit the puppy under the left ear once. It was later found that the bullet left the dog’s body at the shoulder. Apparently the second bullet was missed, but despite an investigation by the STPD and Mr. Cates using a metal detector to find it, the second bullet was not found, Cates said.

After Shelton shot the dog, Cates said he looked astonished and exclaimed, “Do you understand what just happened? I fired my gun! ”Cates said the officer then repeatedly asked,“ Are you all okay? ”By now the dog had crawled back into the house bleeding, the kids were all crying, and Cates said she thought,“ I wouldn’t get in a thousand years ago believe that he drew a gun. ” At least, she said, the officer had pepper spray and a taser with him.

Martin admits how quickly the matter unfolded (less than four seconds, he said) and believes “residents had no idea the officer had to shoot the dog,” the press release said.

Meanwhile, another neighbor who allegedly works for the Navajo County Sheriff’s Office had seen the whole thing from his nearby house and called an emergency vet. Cates himself had called a local veterinary clinic and left the house with the dog and one of the children. The local vet that Cates calls Dr. DeSpain identified, said the clinic didn’t have the equipment to properly diagnose Hazel, but provided first aid to the dog, which included medication and a stab on the shoulder, enough to provide drainage that the vet expected happen.

The doctor immediately arranged a clinic in Gilbert to see Hazel, and Cates and her 16-year-old, who can drive, headed for the Valley. But first she returned home and Officer Shelton was gone. In his place was a Sergeant Adams, she said, who noticed that he had just completed the “investigation” and drove off without saying a word to Cates. While mom was at the vet, the other children were watched by a neighborhood NCSO employee. The bullet, believed to have penetrated Hazel’s body, was found in a “mushroom-shaped” state in the mud outside the front door, Cates said.

So Cates, the 16-year-old son, and Hazel drove to the Gilbert Clinic, where x-rays showed bone fragments in the dog’s neck. The mother and son stayed at a hotel for two nights and returned to Snowflake with Hazel the following Tuesday, she said. At this point the dog was drinking and eating and was released for release. Gilbert Clinic charged Cates $ 495 to start with and told her the total bill would be between $ 3,000 and $ 5,000.

Back in town, Cates said she reached out to a police sergeant and lieutenant, as well as the chief of police, to find out exactly what happened and who will be paying the bills. She was told that Officer Shelton had a body camera that recorded the incident, but said she had not seen it yet. Chief Martin emailed the Independent that the footage was available for viewing. Meanwhile, Cates said Hazel was fine, but now she starts shaking when she hears loud noises, even thunder.

Chief Martin concluded the press release by saying, “In this case, however, we believe that there was no other possible outcome that would have resulted in the officer or anyone else being unharmed. We are grateful that the dog survived and was able to return home after the operation. “